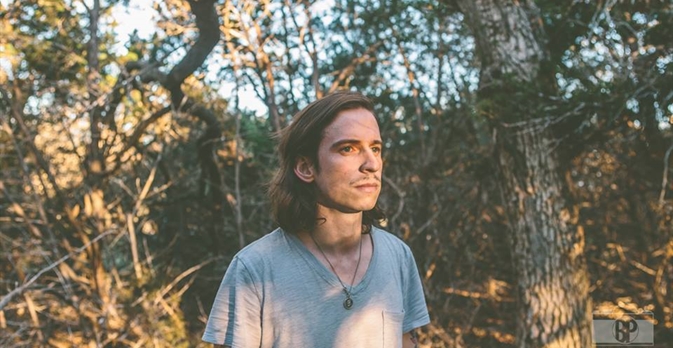 Ten years have passed by between your solo debut album and “Pearls To Swine”. Can you tell us what has happened in your life during this time span?
I’ve moved a few times.  I used to live in Ohio and then I lived for a few years in Ecuador, teaching English there and doing volunteer work.  I moved to Austin in 2011 and have lived here since, completing graduate school and working for the state government for a few years.  I was making music privately throughout this time but decided to be more public with it recently.

How did your relationship with yourself as an artist and with music develop during this time? Did you try to repress it or did you reach an equilibrium point in which you thought: “This will survive no matter where the world goes”?
I don’t know.  I only like to think about what is alive in what I’m doing and how to access that but nothing beyond that in terms of how it could last.  Like so many others, my life experiences – especially choosing to wander off the beaten path – are distilled in what I do.  When you have strayed for so long, it becomes natural to do things for yourself more than for others because there is no one else around.  I’m comfortable with that solitude in how I work.

First of all, I’d like you to comment on the title you’ve chosen. The Italian equivalent is a very inflated slang expression, so you might like to explain to us better the actual meaning of “Pearls To Swine”.
Sure, the title is a line from the album’s second song, "Some Beast Will Find You By Name". But the phrase is an idiom refers to sanctimony that came from the book of Matthew. I am pretty much an atheist but I really liked the imagery and power of that passage and I also like the idea of devolution and how beauty and ideals fade over time. Beauty is a serious problem and even the idea of beauty can be repulsive sometimes. I wanted to write dynamic songs that hint at that idea in some ways and phrase "Pearls To Swine" was appropriate.

There certainly is a big “cesura” in your musical expression from “Nostra Nova”: sparser arrangements, but I think the most important feature is recording the album live (except for vocals if I’m not mistaken). “Pearls To Swine” has a very strong, raw emotional drive, it sways you back and forth. It can be also tiring, for the general listener. What was your aim in terms of general sound/mood/atmosphere for this record?
I wanted this album to sound sparse yet expansive – geographical in the sense that the songs sounded like the American West because that is where I live and that is where I was born and where my family is from. The landscape is a character in this album and it, too, is devolving into something unnatural, like in the last track City Limits. I wanted the mood of the album to feel like the listener was outdoors and that they would be able to dream about the landscapes around and within themselves.

I read in many of the articles regarding you and/or “Pearls To Swine” that you are defined a “prodigy” of the songwriting world. I could see why, after listening to something like “Nostra Nova”, a beautiful and incredibly layered debut album. A very strong songwriting, something you appreciate in “Pearls To Swine” too, of course. How do you look at those days now and at the record itself?
Thank you for those kind words.  It’s hard for me to say, really, what is different between then and now.  I feel more comfortable in experimenting with my voice and how it can bend and move – more so than before.  But time is non-linear and who I was then and who I was now is still a person interested in similar things, similar beliefs, and similar ways of seeing the world.  My habits and work style are more weathered, for better or for worse, and maybe ossified in some ways.  I want to take more risks now than before and all that I can really hope is to continue to create and learn and grow.

I read that “Nostra Nova” has so many instruments and styles because you were trying to find your musical voice. Do you feel closer to that now, or it doesn’t really concern you anymore?
I feel closer to it now because I’ve spent so much time trying to feel comfortable in my own identity.  My guitar playing, my singing all stem from a place that I feel is uniquely mine and I am finally comfortable with that.

How influential were your current band members for “Pearls To Swine”? I can certainly recognise the kind of “impending doom” atmosphere Thor Harris gives to a song like “Outlands”…
My band members immensely inspire me.  The percussion on this album played by Thor Harris (congas, vibraphone, timpani, triangle) and drums by Matthew Shepherd and Rodolfo Villarreal III is a focal point of the record, along with Aisha Burns’ violin parts that kind of act as a duet with my vocal melodies and phrases.  Dailey Toliver’s bass parts glue everything together and are vital as well.

You share with Shearwater some underlying theme of the sacredness of nature, its relationship with the human soul - at least I can feel that from time to time. “Juniper Arms” is inspired by “Desert Solitaire”, a kind of Colorado’s “Walden”. Can you tell us about it and how your song relates to it?
Thank you.  I feel very strongly about how we as humans can and should connect with nature and how that connection is being damaged over time.  The concept of nature is easily understood because we try to define it institutional terms and values.  The idea of a place that is less affected by societal, economic, and technological shocks can be restorative and that, in part, is what my song Juniper Arms is about.

Many have acknowledged your talent, the artistic drive in your music as a real equivalent of the great names of the past. It surely is something rare nowadays. If you had to choose, which name really stands out for you?
That is nice for people to say that.  I don’t know, I don’t think about these things very much but I’m flattered that people relate my music in that way.

I read that some kind of disillusionment led you away from music, after “Nostra Nova” release. How do you find the music world, from your point of view, ten years later?
In some ways, it is refreshing to exist in a different music world than that of 10 years ago.  It is easier to connect with people and listeners and other musicians now than it was then.  But things are so much more ephemeral (probably only to be replaced by an even more ephemeral future music world) so it is really overwhelming to realize how much music is being made and how to take it all in.

What are your plans for touring with “Pearls To Swine”? Can we hope for a European/Italian tour and when/with a full band?
My band and I are touring for the next two months here in the US and a couple shows in Canada.  We’ll probably be announcing more touring over here in the early part of 2017 and there are plans in the works to get the band out to the UK and Europe sometime next April/May.