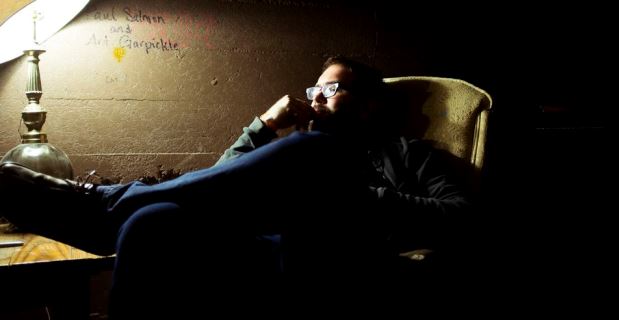 A shelter against the cold

interview by Gabriele Benzing
Tweet
Writing songs: the most immediate way to connect with other people. A loner like Owen Ashworth knows this well since he was a boy. Songs can create stories, exorcise nightmares, deliver from Christmas sadness. They can even protect from the cold that grips the heart, as the new moniker chosen by Ashworth suggests. We asked him to retrace with us his path from Casiotone For The Painfully Alone to Advance Base, in the occasion of the release of his new live album "In Bloomington".

Could you tell us something about the beginnings of your music path? When and how did you realize you wanted to be a musician?
I can't remember when it started, but from a young age, I had a strong desire to connect with people through art. I think it was just a natural extension of my loneliness, melancholy, social awkwardness, narcissism, etc. I wasn't always great at talking to people, but I badly wanted to feel understood. I tried lots of mediums (writing, drawing, acting, filmmaking, to name a few) before I came to music in any kind of serious way. I guess I was in my late teens when writing and recording my own songs really started to feel possible. I was very attracted to the immediacy of pop music. They can feel like electricity. Boom! Instant feelings, instant connection.

Advance Base began following the end of Casiotone For The Painfully Alone. Was it hard for you to start over with a new project?
It was hard, but I felt like I needed a change and a challenge. I started Casiotone when I was 20, and thirteen years later, that music wasn't relevant to me in the same way. It didn't feel good to keep playing the same old songs, carrying the torch for a version of myself that I didn't relate to any longer. I was proud of what I'd made, but I wanted to try to make a new thing that felt like an honest representation of myself in that moment. Advance Base isn't nearly as popular as Casiotone For The Painfully Alone, but I think it's pretty normal that people prefer the early songs, the songs that were made by a younger person, the songs that they listened to when they were younger and their connection to music was stronger. I have to keep moving, though. Hitting reset on a teenager's game at age 33 isn't easy, but it's exciting, too.

Advance Base was the name of a meteorological station in Antarctica. For those who didn't know it yet, could you tell us the story of the name you choose for your project?
In 1938, Richard E. Byrd published a memoir called "Alone" about a terrible winter he spent alone at Advance Base Meteorological station in 1934. He nearly froze to death, and experienced a sort of spiritual awakening in the process. It's a brutal and inspiring and beautiful book, maybe my favorite one I've read. I've revisited it many times over the years. When I moved to Chicago in January 2006, it was the coldest weather I'd ever lived in, and the tiny office where I set up my 4-track recording studio wasn't very well insulated, so I named it Advance Base as a sort of joke. I named a Casiotone for the Painfully Alone singles compilation after that frozen little studio where most of those songs were recorded, and after Casiotone ended, Advance Base was the name that I was left with. I like the idea that the music is a place. Thinking of my songs as a form of shelter against the cold is comforting to me. 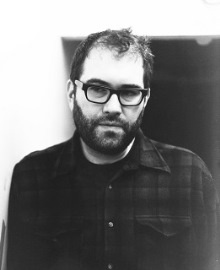 What difference do you feel between "A Shut-In's Prayer" and "Nephew In The Wild"? How do you think Advance Base's sound has evolved?
A lot of "A Shut-In's Prayer" was recorded live in a room with other musicians, which gives the recordings a warm, friendly atmosphere. There's an airiness to some of those recordings that I just love.
"Nephew In The Wild" was mostly recorded by me, tracking one instrument at a time, alone in my basement. That method partially came out of necessity, it also felt appropriate for the kinds of songs that I was writing at the time. I had some friends overdub parts here and there, whenever the songs felt like they needed something beyond what I felt capable of, but overall, there's a lonely, claustrophobic quality throughout "Nephew In The Wild". There is also a lo-fi abrasiveness that makes that album feel a little more Casiotone-y than "A Shut-In's Prayer" did, although I'm using more live instrumentation that I used to. I don't know if I can track any kind of linear progression from one album to the next, other than just feeling like I'm getting a little better all of the time. For all of their commonalities, each record I make feels like a separate obsession.

"In Bloomington" documents a special full-band concert. How did it happen and why did you decide to release it as a live album?
Because "Nephew In The Wild" had been recorded piece by piece, and I'd mostly just performed solo versions of the songs at my shows, I was really curious to hear how the songs would sound when performed all together by an actual band. I usually try to do some kind of special show around Christmas, so this past December, I got together with a bunch of good friends (including some of the people who had contributed to "Nephew In The Wild") to form a temporary "Nephew In The Wild Band". It was a real thrill for me. We ended up doing two shows, and the second one in particular just felt incredible. I hadn't intended to make a live album, but we found out afterwards that the live engineer had recorded the show, and as soon as I heard the recording, I knew I wanted to share it with as many people as possible. I'm very proud of that performance.

As a listener, do you love live recordings? What are you favourite live albums?
I used to really prefer studio albums, but in recent years, I've developed a special fondness for live albums. There is a rawness in live recordings that attracts me. I've become more and more interested in stand-up comedy in recent years, so maybe it's that quality of spontaneous performance that I'm connecting to. Some favorite live albums that come to mind are James Brown - "Live At The Apollo", Bill Withers - "Live At Carnegie Hall", Neil Young - "Live At Massey Hall 1971", John Prine - "Live", MF Doom - "Live From Planet X", The Raincoats - "The Kitchen Tapes", Harmonia - "Live 1974" and the live stuff on Jerry Jeff Walker's "Viva Terlingua". I also have about a half dozen Nina Simone live albums that are all wonderful.

How do you live your relationship with live performances?
I get a lot out of performing. I feel very grateful that I get to play my songs for people. I even like talking into a microphone. I like not knowing what will happen. So much can go wrong! It's exciting. It feels like an important part of my emotional life at this point. I start to feel crazy if I go too long between shows.

Your songs are full of different characters and stories. Is there any character that you've been particularly fond of?
That's an interesting question! Sometimes the characters are based on real people, and it's hard for me to separate the invention from the inspiration, but sometimes the characters are just made up, and I can't quite trace where they came from. Those are probably the characters that I have the most special feelings for. I think about the kid in "Pamela" and her family and the people in her town quite a bit. I think about the people in "Northfield, MN" and "White Jetta" too. 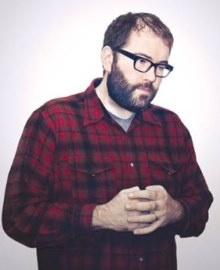 Why did you write a series of songs that take place during Christmas time?
I love Christmas and Christmas music. I have ever since I has little. Maybe it's the sleigh bells? Vince Guaraldi's "A Charlie Brown Christmas" is one of my all-time favorite albums. There's an inherent solemnity and melancholy to Christmas music that just hypnotizes me. Christmas is glorious and it's depressing! There are so many different ways to have a disappointing Christmas. I want to sing about them all.

There's a horror feel in songs like "Pamela" or "Summon Satan". What do you think is the secret of a good horror movie?
I think the secret is leaving a lot of the really scary stuff unseen so the viewer can fill in the blanks with their own horrible ideas. It also helps if the music is good.

Did you ever feel the need for a mean of literary expression larger than a song (e.g. a novel)?
I guess I do, but not in any serious way. At least not right now. I still get a lot of satisfaction from writing my little songs.

In your career you have covered songs from very different artists, from Prince's "When You Were Mine" to Springsteen's "Streets Of Philadelphia". For you what's the key to really make someone else's song your own?
Sometimes I'll just love a song so much that I'll find myself thinking about it all of the time, so it plays over and over in my head, but then, when I listen to the recording again, I'll find that it sounds different than how I remembered it. Sometimes I'm just compelled to make my own version because I want to try to capture that weird way it sounded in my head. And sometimes it just feels great to sing a really wonderful melody, or some really well-written lyrics, and it's as simple as that.

You founded the label Orindal Records together with your brother Gordon. In your opinion, how did the music market change during last years? What do you think about the chance for the artists to promote their music in the streaming services era?
I don't have a lot of hope for the future of the music market. It gets harder and harder for me to eke out a living from my music and from the label. The revenue I earn from streaming is small, and fewer and fewer people are buying physical media. I will keep making and releasing albums for as long as I can afford to, because it's the thing I'm compelled to do.

If your label could release the next album of any artist you want, who would you choose (and why)?
I would love to release an album by the Cleveland, Ohio singer and songwriter Bill Fox. "Shelter From The Smoke" and "Transit Byzantium" are two of my all-time favorite albums, and just to hear a new album from Bill Fox would be an incredible thrill.
Discografia

Advance Base on web

Nephew In The Wild