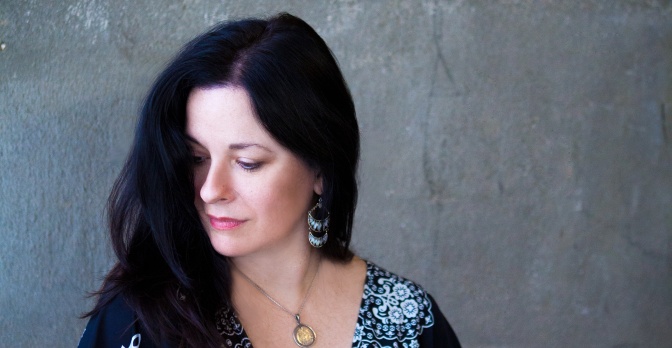 A songbird and her guitar

interview by Vassilios Karagiannis
Tweet
Imagine you meet and old friend of yours, one you haven't met for ages. You tell him you're a musician, then he asks you to play a song. Which one would you play?
“I Had A Lover I Thought Was My Own”, definitely. It has a picking pattern that I like, so it's fun to play, and there's a story that I like as well. I think it demonstrates my full vocal range and showcases all of my best qualities.

This year you released “The Song The Songbird Sings”, your fourth album. Can you talk about its conception?
Where I live there are many birds, when I record little demos at home I'll often hear the songbirds in the background. I ended up writing quite a few songs about birds, and the album as a concept came together naturally. Also, there are a few people who call me Songbird as a nickname.

Any particular anectodes about the songwriting and/or the recording?
I have been working with my friend Bob Kendall who did the recording and producing on my past few singles and radio sessions, and he owns this shed in his backyard, which is a magical place, that I thought was perfect for the recording of the album. Bob thought that it was best if we moved the recording process into a friend's studio. I was then left alone in this room full of drums, while Bob was on the other side of the window. It felt so cold, so lonely... At the end, Bob said it would be OK to go back to the shed. We got most of the songs there in one take.

What has been in Allysen Callery's player recently? Any advice for some great musician/band we might have missed?
I've been listening to Jessica Pratt a lot recently. I love her, everybody should go find her, especially her first record. I am discovering Joshua Burkett as well. He has been composing experimental folk music since the 90s and he sends me tons of Cds and compilations. We are talking about collaborating together in the future.

You said you were a poet long before being a musician, something I can feel a lot throught the way you write your lyrics. What/who inspires them the most?
I'm always motivated by love, longing for love, loneliness, desire, this kind of enchantment. With elements of the natural world as well.

What's the effect that being a self-taught musician has had on your songwriting? How did you develop your peculiar fingerpicking style?
I guess that's the point: when you're alone in your room, there's no one to tell you that you're doing it wrong. That's how I developed my picking style, which uses 4 fingers.

Has your songwriting somehow changed throughout your career?
Oh sure. It's funny. I used to write far beyond my capabilities, I think in the beginning my chord progressions were more complicated and left hand dominated. Now, I often use open tunings and make up my own chords. I can't notate music, so I have to videotape myself in order to remember what I've played. When I started using open tunings, my fingerpicking changed so much so that my right hand now excels the left one.

While your songs sound neat and perfect the way they are, have you ever thought about some changes in your style? Any new instruments, maybe?
Yes, I've met a violin player, a friend of my friend. She came to a concert in Cambridge, and she asked to sit in with me on her violin. The way she plays, with these far-eastern nuances, was really magical. If I composed with violin, that's how I would like it to sound. I asked her if she would like to record with me, and she agreed. I'm very excited!

Final question: what can we expect from you in the future?
There will be and Ep called “Princes Pine”, coming out soon on reverb Worship (UK). I have a new full-length album, too. I'll start recording in the next few months. Someday, I'd love to record and Ep with British isles folk music covers which influenced me so much as a musician. Also, the vinyl release for “The Song The Songbird Sings” will be coming out on Jellyfant in early 2017.
Discografia

The Song The Songbird Sings