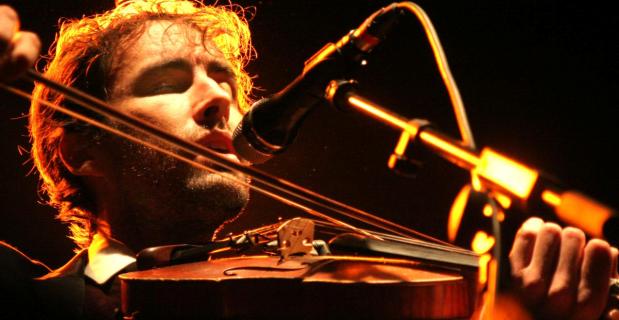 Balanced on a violin's string

Consumed by the music. Consumed as to take the shape of the melodies he's constantly looking for. An animal perfectly adapted to the music halls, as he sang in "Anonanimal". Last year, Andrew Bird brought everywhere his violin, from festivals to churches, from movies to museums. And after months on stage, he's back to give us an handful of his most precious songs ever. On the occasion of the release of "Break It Yourself", the American songwriter accepted to open for us his case of words, notes and old gramophones.

You have been making music for many years, collecting a huge number of recordings since your debut with "Music Of Hair" in 1996, when you were just 23. How did your relationship with songwriting evolve since then? Looking back at your music path, what do you see?
I see a restlessness from record to record but also within the songs. When I started making records I was still a student/fan of music, then somewhere before "Weather Systems" I was totally consumed by it. There's no style it's just me.

"The Mysterious Production Of Eggs" represents an important step in your music career: it received many enthusiastic reactions from critics and fans and helped your music reach a wider audience. How you relate with that album? What does it represent to you?
It took 3 tries and 4 years to make that record because I was teaching myself a new language. I still like playing all those songs. They are very well crafted.

After the release of your previous record, "Noble Beast", you had an intense year of touring. In the documentary "Fever Year", Xan Aranda depicted that period and your state of constant fever... Could you tell us something about that feverish time?
It was a rough time. It was like I had been on the road for 6 years and I was finally turning into an animal that lives in a cave in Mexico. Like my body temperature had changed to deal with constant performance.

In "Break It Yourself" your music seems to need more space (and less additions). The role of your violin sounds even more crucial than it was in the past. Do you think the instrumental music you worked on since "Useless Creatures" had an influence on that?
I think so. I was tired of quarantining the instrumental side and wanted to bring it back into the songs. Whenever I make a record like "Useless Creatures" or "Weather Systems" or "Fingerlings", where they exist to catch the overflow of ideas, people seem to really like them. 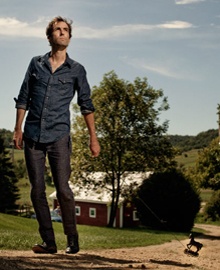 For "Break It Yourself" did you work as usual in your barn? How was the recording process of the album?
I have developed a lot of music in my barn but this is the first record I've made entirely in the barn. It was the most fun I've had making a record. It's mostly live. It's just four people playing music together.

Let's talk about the album's title. How do you think we're able to break our hearts ourselves?
I don't really think it's possible. That's sort of the point. When we are so self reliant though, who else could do it? When we get too close to the source things fall apart.

In the last track of the record, "Belles", we can hear the sound of crickets. Do you think your music could be a soundtrack for the breath of the nature?
It doesn't need one.

The cover of "Break It Yourself" shows an image from the beginning of the twentieth century. Why did you choose that picture?
My grandmother took if when she was 11 in 1915. I just think it's a remarkable photo pregnant with the future.

You made an exclusive limited edition of your latest album (just 1000 numbered copies), that includes a double vinyl version, a CD version, a DVD and many other collectables. What is your relationship with (music) objects? Are you a collector yourself as well or did you just mean to make your addicted fans happier?
My mother and many of my friends are artists so I enjoy collaborating with them.

How do you relate with the past? Who are the most influent musicians/songwriters in your path, the ones who changed your way of conceiving music?
Lester Young for improvising, Low for restraint. It's too hard to boil it down.

What are you listening to, lately? Are there any artists that you recently discovered and especially appreciate?
I just started getting into Townes Van Zandt.

The gramophone is one of the most distinctive symbols of your music. What aspects of this instrument fascinate you most?
It's modern but still a little Victorian so it has this naturalistic shape to it.

You use to make many variations on your songs during your live performances, almost reinventing them every time. What does improvisation mean to you?
I improvise to find melodies and there's nothing like finding a melody for the first time while people listen.

Did your approach to live shows change after your "Gezelligheid" concerts, which were based on the idea of coziness?
They are more patient.

On Jan 28th 2012 you played a concert in a very peculiar location, called "A Room For London": a riverboat inspired by Joseph Conrad's "Heart Of Darkness" that sits atop Queen Elizabeth Hall in London. What kind of influence do places have on you and on your music's mood when you perform or record?
I like having to adapt to my environment. It keeps things exciting. The boat from "Heart of Darkness" was especially inspiring. 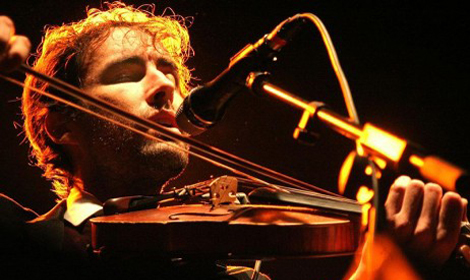 My Finest Work Yet

I Want To See Pulaski At Night

The Mysterious Production Of Eggs