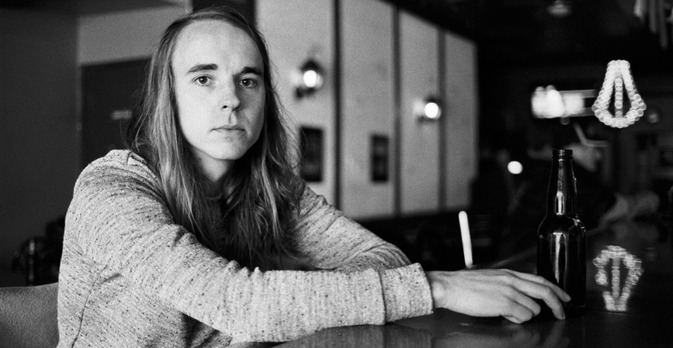 A sit-com of ghosts

Hello there – well first of all thanks for your new record, it’s probably my favourite this year so far. One of the things I did to picture “The Party“ in my head was to have a Streetview walkaround of Regina, your birthplace – as my only reference to Saskatchewan came from an old transsexual in Vancouver calling you “those rednecks”. So how is it to grow up in Regina and is “The Party” set in it?
Regina is a great place, the people here are really what makes it special. When I was writing "The Party", a lot of the songs I was picturing taking place in the house I was living in in Regina, so yeah - I guess it’s set here.

As far as I understand, this is your first album recorded in a studio. First of all, congratulations on the sound and to you as a musician, it’s incredible! But what really stood out for me was how focused your songwriting was. Was this professional environment also important for your inspiration? Sometimes you are led to believe that art and technique do not intersect…
I think that the setting of a studio for this album helped me to focus a bit more because there were no distractions. I went into the studio by myself and you needed a key card to get into it so I knew that no one was going to be dropping by at any point and it was just really nice to be able to focus and try things without the threat of being interrupted.

Will this be your last album in which you play most of the instruments and that you record by yourself, you think?
I don’t think it’ll be the last one. That’s how I work best. It’s the easiest way for me to be happy with what I’ve made. I can lean on my own ideas and try anything that I want to without having someone tell me it’s a bad idea. I mean, lots of the things that I try are bad ideas for sure, but sometimes following that path helps me come to a good idea.

In which song do you see yourself in the most?
The song "Twist Your Ankle" is probably the one that reflects me the most. I wrote it about a specific night that happened a few years ago.

I read that you are also a Friends fan – or at least you’ve seen it, as most of us did I guess. So I have to ask, which is your favourite character and which ones belong to “The Party”?
Gunther for sure is at The Party, somewhere in the corner. I think my favourite is Chandler, he might be there too, but none of his jokes made the album.

“The Party” will probably become a classic of mine, but it has in general a very “classic” feeling, and some very Beatles-esque tracks/moments. Who is your favourite Beatle? I’ll tell you mine first: George Harrison. “The Party” is probably my post-modern (sorry) “All Things Must Pass”.
I think my favourite Beatle is Paul. He is a true melodic genius. I don’t really skip around much on Beatles albums but I look forward to Paul’s songs the most. Also his Ram solo album is amazing.

I read that you won a grant for some recording sessions in a music-dedicated German castle, haunted by ghosts (!). Can you tell us a bit about that experience? Any ghost stories?
That was a great experience. Really nice setting and a cool studio. The sessions didn’t really turn out so we didn’t get to use that much from those. I think some of the strings from "Early to the Party" are the only German recordings to make the album. As far as ghost stories go, we didn’t have any encounters, but my friend Colin was having some weird electrical static during a Skype call with his girlfriend, so they definitely tried to blame that on ghosts.

Also, I do not take for granted that musicians can actually win grants here in Italy. I guess there might exist some sporadic, local initiatives but I exclude that it’s working as a system nation-wide speaking. Can you explain to us briefly how artists and musicians are supported by the State in Canada?
Canada has a lot of grants for musicians. The province of Saskatchewan here has been extremely helpful for me as I receive funding from an organization called Creative Saskatchewan. There are also Federal programs that fund recordings and touring as well. I’m really thankful that I have the support of my government in this process, I don’t really know how people get off the ground without that help.

Thanks for your time and come to Italy soon! Can you promise that?
Yes! I’ll be there this fall!

The Bearer Of Bad News