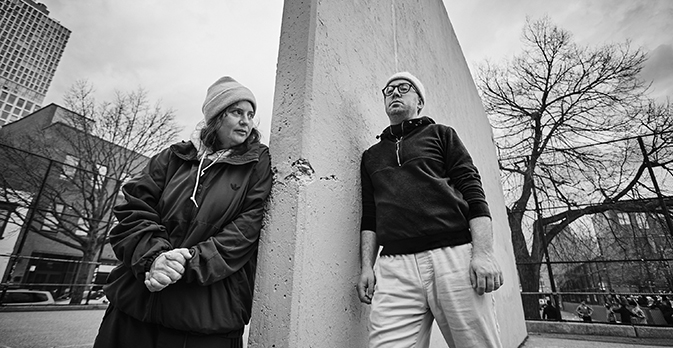 Let’s start from the basis of your creative process: how an Anteloper project/album commence? Also conceptually… Do you start from an idea, or a sound, or a mood?

jaimie branch: Anteloper starts from sound first always. We’re improvisers and so we put our ears to the ground and follow the sound whatever path that may go playing through a lot of different types of genres and moods and it's always different depending on where we're at physically, sonically, and spiritually. On this next record we worked with Jeff Parker as a producer and he took our raw material and added a layer of “songitude” to the music. In fact we have an Anteloper “pop tune” on our new record! “Earthlings” is a four bar loop extracted from one of our improvisations that Jeff sampled and I sing a real deal Melody on top - it’s a real song, ha.  It's been really fun rehearsing this tune and this tour is going to be the first time we do it live!

Could you describe your process of music composing and production? You used to make impro studio session? You compose a track by editing the recordings made together live? You work also separate, each of you in your home studio?

Yes, we do all those things Jason and I each have our own Studio spots that we work in but generally speaking we improvised live together in the studio. Sometimes one of us will have an idea for a song or a melody or rhythm but generally speaking is all improvised and then our records up until this one have been edits from long improvisations with very little post production. “Pink Dolphins” is different because we're working with Jeff Parker in the role of producer, so there’s a lot more going on in post production. When I compose for my band “FLY or DIE” my process is completely different in some ways because I bring compositions to the band, but the starting point, it's still improvisation. When I'm getting ready to compose I do a lot of playing into my phone or singing into my phone or recording to a computer ideas and then I work them out and I keep recording as I'm working them out because you never know when you're going to play the thing that is the thing!

jaimie, you generally design the artwork of the records. So the visual plays a specific role in your music-making process? Are you influenced by images (abstract, real, etc.) and/or by the act of creating images while conceiving and playing music?

I'm extremely inspired by color in particular and I feel like when I compose with paintings I generally start with water and raw ink going onto the page and then, a lot like the music, I follow that color wherever it may go! I love looking at art. My favorite painter is Rothko, Ellsworth Kelly is amazing with color, and I recently saw a Yayoi Kusama show at the New York Botanical Gardens that blew me away. I feel like her use of color and scale is amazing and in the setting of a gigantic Botanical Garden that ecology was really clear. A full ecosystem. The sympathetic vibrations between the art and the nature were so obvious it felt like it was breathing and I wasn't even high! (maybe a little high…)

We would like to explore a feature that characterizes your upcoming album. How did you decide to involve Jeff Parker? Which was his contribution in the making of your new work?

Jeff Parker put his unique musical stamp on “Pink Dolphins” for sure. He worked a lot in post-production and added guitar, bass, some synthesizers – he enlisted Chad Taylor to put some in Mbira on it… Jeff is a huge inspiration to me musically and he's an incredible human being personally, so I always jump at a chance to work with him. His band Tortoise was one of my favorite bands when I was in high school and it's sometimes still amazing to me that we work together at all!

How are you approaching the live concert in relation to the recorded album?

Well, what's different about “Pink Dolphins” is that we actually have songs we need to learn! We're still going to play an uninterrupted set but we will play “Earthlings” and we'll go in and out of other scenes that appear on the record - in an Anteloper way.

What differs and characterizes Anteloper from the other art projects that each of you has?

Anteloper is a true Duo. Jason and I each bring our musical personalities to the table and we meet each other where we are at. A big obvious distinction for me versus some of my other projects is the extensive use of electronics. In my solo practice I use a similar setup to what I use in Anteloper but in almost all my other projects I'm doing a more acoustic thing or a pared-down electronic thing in Anteloper the electronics are integral to almost every move I'm making even if I'm playing acoustic trumpet, it's rare that I wouldn't have a loop of some sort of electronic chaos going on underneath. Occasionally you’ll get a fully acoustic moment from me in this band, but it’s rare, ha. It's been amazing growing with Jason because both of our practices have changed over the years but we're still making music that is authentically ourselves and authentically Anteloper and I’m hear for it!! On a personal note I'm so glad we all get to experience music again together!