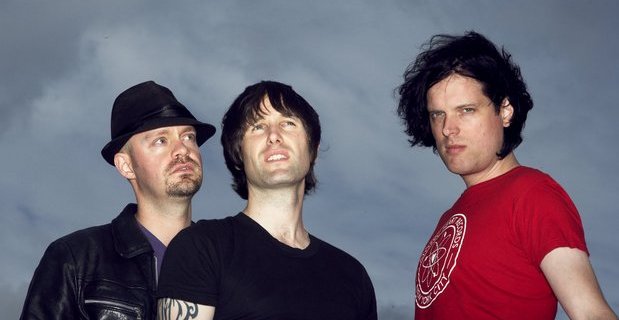 interview by Stefano Bartolotta
Tweet
For the release of the new album "Islands", we had the opportunity to talk over the phone with Tim Wheeler, singer, guitarist and songwriter. His answers give us an inside view of the whole process behind the making of the band's songs, from songwriting, to selection, to the work on the sound.

I think this new album is the most diverse you ever made, Ash went through a lot of different phases about style and sound, and in this album you did something new, that you never did before, and put everything you did in your whole career.
First of all, a song, to me, has to be good in a basic way, I mean melody and lyrics have to be good. Then, I think the diversity in this record came out of writing a lot, I wrote like ten songs in ten hours and I did it once a week, and because of all of this writing, I ended up experimenting a lot. I can play around on different styles when I’m writing.

About what I think it’s new for Ash in this album, I mean a song like “Did Your Love Burn Out”, that goes back and forth between a slow moment and a strong one, and, in the last couple of songs, you used the keyboard in a way that I never heard before in Ash.
“Did Your Love Burn Out” is really fresh for us, the bluesy feel and the funky feel, when I was working on it I was wondering if I was going too far, but I think it really works actually. Rick is very versatile, he always work on new styles, and I heard The Clash say that they could play anything because their drummer could play anything, and I think this record’s so good because Rick can play around on different styles. About keyboards, I got a vintage keyboards collection, but they’re hard to get into Ash records most of the time, but I’m glad they made it to the last couple of songs and their walls of reverbs, the songs are built around the keyboards, which is kind of new for us as well.

You just said you write a lot, but how does the songs selection process? Can Mark and Rick say “we like this, we don’t like this”?
Yes, that’s when I really need them, because I probably know when a song is good or not, but I need them to agree, and sometimes they like song I think are just OK, sometimes they give really strong responses, and when they say “this is really good”, we play together. I need their perspective, and that’s a really good thing about being in a band.

About playing different styles, at what point you decide which style to couple with the song? Do you decide since the very beginning, or you just write the basic melody and lyrics and then you work with the band on the sound?
I think the style is already in when I write, but when we start playing it kind of takes its shape, and it can evolve. We choose the songs to work on mainly because we think they’re melodically strong, and lyrics are good, and then we start to play and say “hey, it’s a different style than it was supposed to be, OK, we’ll put it in then”. We always try to find a balance between sounding like Ash and sounding new and exciting as well. Anyway, we don’t do different versions of the same song, we play it once and see the shape it takes, and if it works, we stick to it.

Lyrics on this album are about a breakup. Is it the first time that the whole lyrics in an Ash album talk about a specific event? You did it in your solo album, which was about the passing away of your Dad, but did you do it before in an Ash album?
I think other albums are about breakup and falling in love again, I think “Free All Angels” has a bit of breakup and new love in it, “Burn Baby Burn” was quite a breakup song, “Shining Light” was a new love song, but I think this is the first Ash album when I wrote all the lyrics about just one feel, there were bits of it in other albums, but I think you’re right, I wanted this album to have a whole feel and concept in it.

You, Mark and Rick are credited as producers too, and then there is another guy. Did you have him because you needed the so called “external eye”?
He helped us in engineering in our studio and mixed the whole record, so I wanted to give him credit for this. He can help shape the sound during recording and mixing.

Every time I read press releases and reviews, I think the element in Ash that gets less praises is your voice. I always read about melody, sound and lyrics, but I rarely read something specific about your voice. Do you feel a little bit underrated as a singer?
I don’t know, I’m so many things together, a guitarist, a songwriter and a singer. I think my voice got better but I never thought I’m a great singer, I have my own kind of thing going on, my singing style and my personality, and I think now I’ve got more and more confidence. I don’t worry about not getting credited for it, my voice is just one of the vehicles I use to express my songs to people, but it would be nice to hear that my voice is good, especially in Italy, land of good singers!

What can we expect from your upcoming live shows? Anything different from the past, or jut the three of you playing?
I don’t think we’ll approach it too differently live, it’s always very exciting to have a new set of songs, and a lot of these new one have been really exciting in the rehearsal room. I can’t wait, I think it’s gonna be fast and powerful, and loud.

You played anniversary shows for “Free All Angels” and “1977”, does this mean they’re your favourite albums, or did you do it because you thought it was more attractive for the fan base?
They’re our most successful records, so they’re definitely the ones that mostly connected us to our fans. I would love to do the same for the other albums, but it would be a lot of work…

Can you choose a favourite album, or is it like asking to a parent who is the favourite son?
I’m still really attached to “1977”, and it was great to play it live again on the recent anniversary shows.

My favourite Ash song is “A Life Less Ordinary”, why is it not in any album, but just in the movie soundtrack?
Because it was written just for that soundtrack. We were commissioned to write a song, and it was after we finished touring for “1977”, I hadn’t written a song for one year and a half I think. I kind of wish we could have put it into “Nu-Clear Sounds”, but we didn’t start recording it until the next year I think, so it ended up being just an in between song, but I regret it’s not in “Nu-Clear Sounds”, it would have been nice, and I think it’s definitely one of our fans’ favourite songs.

Twilight Of The Innocents