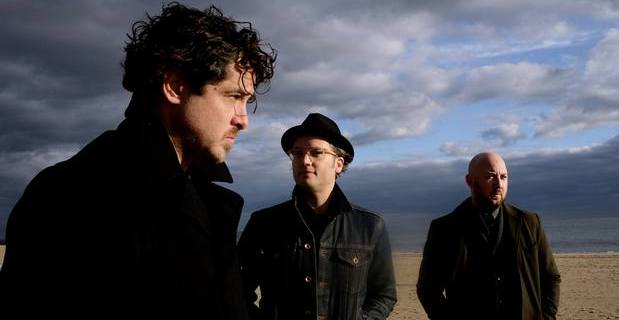 interview by Stefano Bartolotta
Tweet
On the occasion of the third album "This Is Your Life" release, we sent some questions by email to Augustines. Their reply, by the drummer Rob Allen, highlight the band's certainty that their musical path is still coherent and natural and the nature of their project did not change, even if in this record there are several differences from the past.

In “When Things Fall Apart” chorus, you basically say you’re going somewhere else, I don’t think it’s related to music, but then you actually did something different musically in this album, so maybe the choice of this song as a first single was a kind of warning to your fans…
I don’t think that this single is as much of a departure as people seem to think. Throughout our career, we’ve used different types of pianos, synths, strings and what have you, just perhaps not to the same degree. So sure, it’s a little different, but it is still very much Augustines. We chose “When Things Fall Apart” because we thought it was the right choice to get people excited about the new album, and we are proud of the way the song turned out.

And how did the idea of doing something different from the past started to emerge?
Doing the same thing is boring. You don’t learn or grow that way. It’s natural to want to push boundaries and experiment, at least for us. For me this is a natural progression.

You say there are a lot of collaborations in this album, and I guess this is also related to your exploration of new musical territories. Did you want to collaborate with other artists from the very beginning or was it an idea that came out after a while during the making of the album?
We’ve always wanted to, but it’s often not easy to find the right person or group to work with. We’ve always been fans of African music and when the opportunity arose to work with Pape et Cheikh, we jumped at the chance. It took a lot of hard work to pull that off, but we did it, and it was worth it. Beyond that, I wouldn’t say there was a lot of collaboration, but we did get to work with some very talented people on this record

Actually, the range of the sound is much wider, there are more elements and harmonies, both instrumental and vocal. Did you only lean on these collaborations to expand your sound or did you also work in it when it was just the four of you?
Well firstly, we are still a three-piece. We looked at ourselves and our music and analysed where we thought we could improve and what we could experiment with. Vocal harmonies were certainly something we had fun with. We hadn’t really done that before. Another was focusing on the groove. I mean it’s always been there naturally, but we paid a little more attention to it on this record.

You also explain the lyrical content of the album saying that it “questions what this life right here and right now means as we move forward through uncertain times”. Do you feel your lyrics are more deep and meaningful than in the past or do you think lyrics had a lot of importance in the previous albums too?
Bill is a lyricist, and a natural one at that. If you know our history, you’d understand that lyrics in our songs have the utmost importance. They are meaningful and real. Taken from real experiences and feelings. That is one of our strengths as a band, and a lot of hard work goes into creating those lyrics. I don’t think that will change. Bill, myself and Eric are passionate about that.

A lot of fans will be probably quite surprised at the first listen of this album, and maybe someone will not like it. Did you ever think about this or did you just go straight on with what you wanted to do without being afraid of the fans reaction?
Oh for sure, but again, for me, this record is a natural progression. It’s still very much an Augustines album, in my opinion. A lot of hard work and dedication goes into writing a record and all we can do is hope that people like it. I personally think it’s our best work.

It seems you are more popular in the UK than in your country, at least from your next shows list. Do you actually have an idea why, or it just happened and you just go where you have a bigger fanbase without wondering why?
People in the U.K. and Europe for some reason connected with our music more. Keep in mind that America is bigger than the whole of Europe, so that’s a lot of ground and people to cover. In certain regions in N.America we do well. Over time, we are confident that people all over will get to know who we are.

Can we hope for some continental Europe gigs after the UK tour, maybe even in Italy?
We’ll be visiting Europe throughout the year. Hopefully Italy as well. Fingers crossed.

This Is Your Life