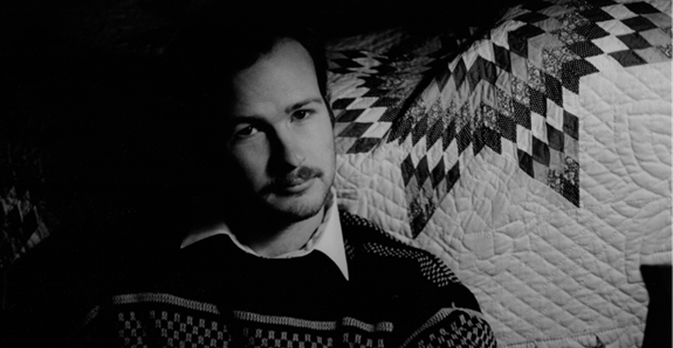 When I finished listening to “Small Talk” for the first time, I felt like the guy in “The Catcher In The Rye”, wanting to know more about Benjamin Dean Wilson, wishing I could call him on the phone whenever I liked. I knew I wouldn’t forget those songs easily. Can you tell us a bit about your life and about yourself?
I'm currently a mathematics student. I have 2 cats. I like to play tennis and paint.  I enjoy fruit smoothies. H'mm... what else... I live in a house in Tulsa, Oklahoma where I have converted the guest bedroom into my music studio and my guest bathroom into a darkroom. It's a very nice set up... except for when we have guests. Ha.

What I read in your inspiring presentation on Tapete Records is that they felt the need to explain to the casual listener, in a similar way, who you are. In my opinion that is also because “Small Talk” sounds like something a very “shrewd” songwriter, at the peak of his career, would write as his greatest artistic bequest. There is a mastery of songwriting tools that is difficult to even “understand”, in a debut. What can you tell us about the genesis of the record, of its songs?
Thank you for the kind words. Honestly, I wasn't really planning on doing anything with this record other than putting it in a box or something so I could listen to it later. I know that sounds funny, but I've always enjoyed playing music as a hobby and have been more focused on writing for films. But as time went along I realized I could kind of work some "filmesque" story elements into music and that could be interesting... So I recorded the album, showed it to some friends and they encouraged me to send it out.

This is a pretty lame, standard question, but it’s hard not to ask it. How do you write songs to be this complex? Do you patch different parts together or build up progressively?
It depends. I like to discover whatever I'm writing as I write. I don't outline or anything.. But I don't always work from beginning to end either. It's kind of a process of building up a melody and lyrics until I think, "okay something else needs to happen in the song now..."  But I think it comes down to the fact that the people I'm writing about are complex...  it's difficult for me to do a character justice if I can only talk about them for three and a half minutes.

I also read in that brief interview that you listen more to classical, symphonic music than to popular and songwriting music. Do you think that played a role in your songwriting? Your songs do sound like songwriting symphonies, both from the lyrical and from the musical points of view.
I do think it plays a part. Before I knew how to play any instruments I used to make up words to symphonic music so I could sing along with it.

Is the demo you sent to Tapete the actual record?
Yes. Ha. I recorded all the instruments and did all the engineering myself so at the time I thought of the songs more as demos... but I think Tapete liked the sort of "rawness" of that approach and we never even talked about re-recording.

There is a definite “retro” streak in your artistic expression, does that reflect on your recording equipment and your instruments?
I do record on 1/2 inch analog tape through a tube preamp... so yeah, it's a little retro. But at the same time, musically, I'm not a purist at all. I take elements from whatever genre I find most fitting to tell the story.

What do you play when you play live and have you got any plans for putting up a band for touring?
I did a small tour in Germany last November and I just played my acoustic guitar - we had some lyric booklets printed up so the audiences could really follow along with the stories. It was very cozy in that way. As for a band...   Logistically it doesn't make much sense right now, but at some point, sure, it would be fun. I watched a Frank Zappa documentary recently and enjoyed seeing how he performed and conducted the full band for live shows.

When I thought about that Salinger reference that got into my mind, I then thought that “Small Talk” gave me the feelings of a book, rather than a record. It rarely happens to me that I am endeared by lyrics as much as by music. Do you also see it as a kind of “multimedia” work of art?
I do. When I'm writing I'm mostly thinking about the story and the lyrics. When I'm recording I'm thinking more about the flow of the music. When I'm mixing I'm thinking about all the technical aspects. When I can step away and listen to it as a whole, I'm really able to "get into" the song as you would a book or movie... and that's when I can tell if the song works or doesn't.

In a sense, it kind of explained to me with a direct proof why it was “right” to give a Nobel prize to Bob Dylan. What is your take, by the way, on his reaction to the award?
I wish I had a better answer for this question. I was amused by Leonard Cohen's commentary on the subject, "its like pinning a medal on Mount Everest for being the highest mountain." But to tell you the truth, I didn't really follow the story.

Thanks a lot for your time. Can we hope to see you play in Europe again, in the near future? Maybe in Italy… I don't have dates set for anything yet, but I certainly have some plans for 2017. I think another European tour would be very nice and, yes, I would especially like to visit Italy.