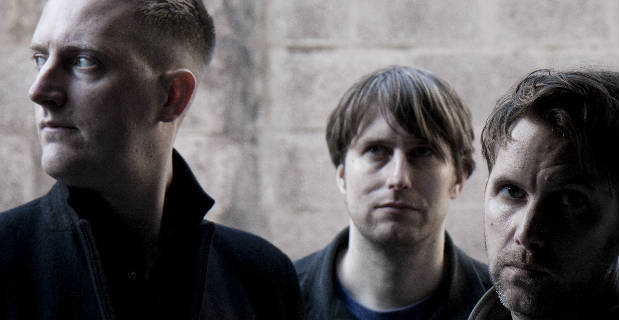 When post-rock met its whiteness

interview by Matteo Meda
Tweet
Let's go with a flying start: do you like pop music?
Of course! I don’t trust anyone who says they don’t like pop music.

Of course, that first question was about the new element I found your fifth album: do you agree in defininf it as “Blueneck's pop album”?
It’s definitely an attempt to bring more of our most accessible elements to the fore. I think Duncan’s songs have always been very melodic, particularly his vocal melodies. So by bringing his vocal performances front and centre, I can understand why someone might describe it as more ‘pop’.

Well, no doubt about the fact you've been trying to evolve the sound you've been porposing in your previous efforts. Did you feel the need to explore new musical lands?
Sure. King Nine was a deliberate effort to make our songs as vibrant, diverse and accessible as possible. That was the main ‘evolution’ we were trying to make. To spread our wings somewhat.

Has there been any new musical discovery or some new stuff you started enjoying to guide you into this evolution?
I think we’re always finding new (or old) music as an inspiration, and I think quite naturally we have been drawn more to electronica for "King Nine". Whether it be back to the music we enjoyed when we were kids (80s synth and new wave) and more modern EDM. But also I think because we were file-sharing back and forth as we were writing and composing it felt easier to draw upon electronic tools and instruments. But to be honest that has always been an influence in our music.

I found your “new” mixture very close to a form of art-pop – Steven Wilson's No-Man immediatly came to me – while a colleague of mine said that “Sirens” sounds very “Talk Talk-remembering”. What's, instead, your opinion?
The Talk Talk comparisons are interesting. A few people have made that reference but I don’t think any of us were fans of that band when we were making King Nine. We knew the early 80s New Wave Talk Talk songs, but not the later period work. However because people have been making the comparison I decided to listen to "Spirit Of Eden" and "Laughing Stock"... And now I consider myself a huge fan. They are monumental records. So I’m flattered that people would choose to say there are similarities, but I don’t always hear it myself. Although I guess we are closer in approach to Talk Talk-esque early art or post rock than we are to a band like, for example, Slint.

What does the album's lyrics talk about? And what about the cover art?
I think Duncan wants to keep the true personal meaning of and inspiration behind his lyrics to himself, even though you can read them on the album art. But I’m sure anyone can draw themes of family, loss and personal responsibility from what they read. But we want people to draw their own meaning from what they hear. The album art closely reflects the album themes, particularly the absence of life.

In the past years you've been often labeled as a “post-rock” band. What do you think about this definition?
We don’t have a problem with it, really. I think that label helped us in our early years (when the term had less of a stigma) as it meant that people were more likely to listen to us. I think "King Nine" is harder to label as post rock compared to our earlier album "The Fallen Host", but while we have long instrumental passages in our songs I guess the label will always stick.

What are the bands, the artists you musically grew up with?
Initially it was pop, rock and electronic bands from the 80s (Depeche Mode, Genesis, Tears for Fears) and you can probably hear some of those influences on "King Nine". Then in the 90s we became more interested in American and British rock and metal, shoegaze, Indie etc. And nowadays our tastes are very eclectic – folk, alt-country, electronica, prog etc. I think we’re now at the point, maybe because we’re getting a bit older, that we don’t feel tied to any particular music scene. We’re now kind of interested in all types of music across the last 4 decades or so.

Your tracks are often credited to the entire band. How do your songs see the life?
They always start with Duncan. He’s the songwriter and without him there would be no Blueneck. A few of his songs, by the time they reach the rest of us, are practically complete. Some will take more of an influence from myself and Ben, either in instrumentation or arrangement. When it comes to playing live, the arrangement and playing becomes more democratic – these are songs that cannot be easily played live so we have to reinterpret them as a group.

What's the human relationship between you outside the studio and behind the stages?
We’re very close friends. We live quite remotely from eachother but we talk on most days, whether it’s about Blueneck or our personal lives. Obviously we love discussing new (and old) music, movies, TV etc.

And regarding stages, what do you think about live dimension?
Playing live is a completely different aspect of the band. "King Nine" was recorded in layers, either in our homes or the studio environment. It wasn’t built as a band. To recreate it live is going to take quite a lot of thought.

Are you planing a promotional tour for “King Nine”?
There’s nothing planned at the moment. I think we’re just trying to rest and recharge our energy after what has been a long recording period. I really don’t know what the future looks like at all at this point.

You're one of the most faithtful Denovali's group... Did you find a good professional partners in them?
Yes, Denovali are trusted friends and professional partners. It’s a really good working relationship and obviously it’s an honour to work on a label with so many other fantastic artists.

The last one should probably be impossible to answer for you: are you going to follow in your next songs the direction you've undertaken with “King Nine”?
Very hard to say at this point. I think "King Nine" has given us the confidence to trust our instincts, and made us think that we could successfully take the band in any or all of the musical directions we enjoy... Electronic, guitar-based, stripped back, soundtrack. It could be any or all or none of these things. It’s going to be interesting finding out what happens.