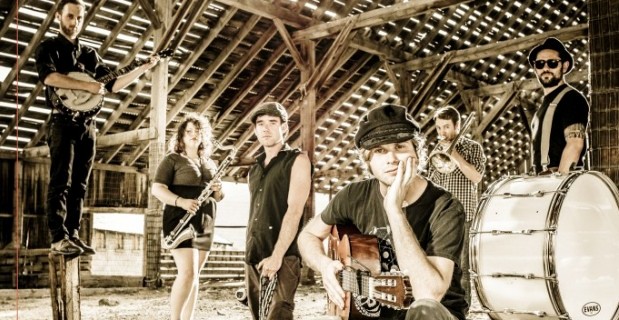 Ghost hunters and wandering musicians: with a name suggested in a dream by a mysterious cowboy, Buster Blue could be the characters of some old folk song. A gang of childhood friends who found their home in an America haunted by the spirits of tradition. After the release of the new record from the Reno-based band, "Sleep Less Where The Heart Is", we asked Bryan Moses Jones to tell us something more about the Buster Blue’s adventure.

On your website, Buster Blue are presented as a “family band”. Could you tell us something about the beginnings of your music path in the small town of Gardnerville?

We all had different musical backgrounds, but found a common bond through marching band & garage bands. Being from a small town has a way of making you focus your attention in either a really destructive way, or toward something better.

When and how did you come out with the idea of starting a band?

I wrote a song titled "Moonlight" for a childhood friend of mine that had died after I graduated high school. It was my way of saying everything I had wanted to say to her. I had never really liked folk music previously, but found myself writing in that style & was discovering my voice as a songwriter. It seemed logical to ask my friends from childhood to be involved. I don't think I had ever thought about having auditions or anything.

Just out of curiosity, how did you choose the band’s name?

I was getting advice & song ideas from a cowboy named Buster Blue in my dreams.

In addition to the band’s core members (Andrew Martin, Rachael McElhiney and Brendon Lund), there are some new entries. How did today's line-up of the band come together?

Our previous drummer, "The Drum Panda", left this last winter to get married to a lovely lady back home. Billy Dohr had been tour managing us previously & took the challenge upon himself to learn to play drums. Filly Corbitt, another new member, was my next door neighbor growing up. They switch between drums, percussion, banjo, guitar, etc.

Your previous album, “When The Silver’s Gone”, was recorded on the stage of the historical Piper’s Opera House in the ghost town of Virginia City, Nevada. Do you think the places where you play can affect your music?

I think location affects mood dramatically. You have to have enough respect for the music to try & find the right setting for the recording. Recording this latest album in an old house was perfect for the songs Andy & I had written both sonically & lyrically.

Is there any ghost you wish you’d met during those sessions?

I had a ghost experience during the recording of "When The Silver's Gone". I had a window open & close on its own in my hotel room. I believe he was going for my whiskey on the table. I can't be too picky about the ghosts I meet. I've had the pleasure if meeting a few on the road. 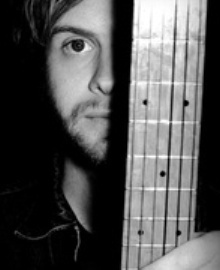 How was the recording and the production of the new album?

We produced it ourselves with band member Brendon Lund doing most of the engineering. It was really liberating being able to work on things as much as we'd like. It can also be a curse when there's no one to tell you to move on. I really learned a lot from working with Zak Girdis & Kevin Bosley as producers previously, but feel we've all become better musicians after having to steer the boat ourselves.

“Sleep Less Where The Heart Is” sounds a little more intimate and stripped down. What difference do you feel from your previous record?

We never want to repeat ourselves. These group of songs felt best served with more attention given to the words & storyline. I think it is lyrically our heaviest album to date.

The songs of “Sleep Less Where The Heart Is” have often to do with sleep, dreams and nightmares… Is there a common thread through the record?

I think both Andy & I have gone through similar experiences with all the traveling we've done with the band. Although different in songwriting style, I think we found a group of songs with a common thread that expressed what we were feeling. Everybody has their own interpretation of what the album means. I'd like to think it's someone re-imagining their lives in a fantastical way whilst living in an empty house.

What do you think about the present folk/Americana scene? Do you feel part of it?

I'm hesitant to attach myself to anything that might be considered "trendy". It wasn't always "cool" to be playing banjo until a couple years ago. I think the real musicians are more worried about writing great songs & will last through whatever trends come & go.

Is there any artist that you especially appreciate?

I've always been a big fan of Langhorne Slim. Both his music & his tenacity. I listened to his advice after a show about putting everything on the line to pursue music. I have to admit that I listened.

In 2011, your cover of Townes Van Zandt’s song “Rex’s Blues” was featured in the volume of our OndaDrops project dedicated to outlaw country. For you what's the key to really make someone else's song your own?

People in general tell stories differently from each other. Playing someone else's song is an opportunity to tell the story with your own musical voice.

Your shows are described as very theatrical: what’s your favourite thing in a live performance?

The connection with the audience during a show feels the most important. Music has a way of tearing down boundaries with strangers. I think us giving our all on stage breaks the ice for people to find meaningful connections both on & off stage with the members of the band.

We like to go ghost hunting. We've spent many nights on the road looking for the dearly departed. We are lucky to stay at a lot of haunted places. The time the Drum Panda was propositioned for sex by a hooker in Denver, Colorado was a funny one as well.

Buster Blue often like to mix up instruments. What’s your favourite one to play?

Mine would be either the Banjo, or Electric Guitar. I find myself smiling most whilst holding them. I sometimes get jealous that Brendon gets to play the chains though.

You released “Sleep Less Where The Heart Is” with a campaign on Pledge Music. From social media to crowdfunding, what do you think about the chance for the artists to promote their music in the digital era?

I think an artist has a fighting chance for anything if they put the work into it. Social networking has given a voice to bands that otherwise would have a difficult time doing so.  It's like a room where everyone is allowed to talk loudly at once. You have to know exactly what you want to say to get anything across to anyone.

If you could collaborate with any other artist, from today or from the past, who would you choose (and why)?

Neutral Milk Hotel changed my perspective on what beauty in music meant. I'm not sure he would want to play my songs, but even planning a birthday party together would be enough for me.

What about your plans for the future?

I'm writing you from the beginning of a long tour. My present goal is to write as much as possible from the road & come back home ready for whatever adventure happens next.

The Unlikely Death Of Moses

Sleep Less Where The Heart Is

This Beard Grows For Freedom