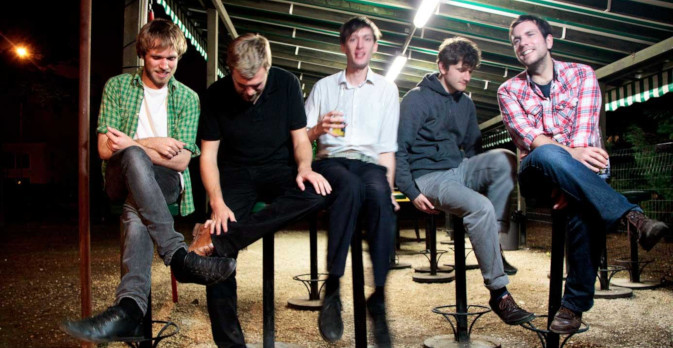 First of all, thanks for the album. I’ve been listening to it in repeat for days now. What surprised me is the incredible sense of direction, in terms of songwriting and arrangements in this “III”. Especially because eight years have passed from your previous release. Can you tell us briefly what happened in this time?
Thanks so much, I’m happy you like it! When we finished the album, I guess we were a little dejected that our then current label weren’t going to release it. Apparently it ‘didn’t sound enough like the last album’, which was sort of the point really. I don’t know why you’d want to make the same album twice. The writing and recording of this album took a lot out of me at the time, so for it to lead to nothing was hard, and I wanted to not think about it for a while. We all started to playing in the other bands in Manchester, some of us in the same bands, and I did a bit of synch music for television which im still chipping away at.

I read in the description of “III”, that it was recorded between 2013 and 2015, but only saw the light 4 years later. How did you keep a sort of clarity in your goals, in general as an artist and in particular for this album, throughout this span of time?
The writing/recording time frame for this album may sound protracted, and in some cases it was.  The mixing/mastering took longer than usual, we were always relying on unpaid voluntary help, which although we were (and are) profoundly grateful for, it means things took a little longer. We also recorded everything ourselves – apart from drums and bass (Airtight Studios in south Manchester) - so we were learning as we were going, and might’ve spent time unnecessarily agonizing over minor details. BUT it still felt like quite an intense period of lots of work, which the time frame doesn’t really suggest, and we were always moving forward and never really got stuck. These things just take time.

Was there any change in the record before its final release?
It was left untouched for ages. Earlier this year we eventually decided to put it out – originally for free digitally, then Bobo Integral came in to press it physically – which meant that we went back to our friend Pete Philipson to give it a fresh mix and master. But all the songs and the order stayed the same.

There seems to be little information about you as an artist. Where does the name of your band/project come from, in the first place? Can you tell us something about your beginnings as a songwriter?
The name doesn’t really mean that much. I was reading something about how stories from the pub or bar shouldn’t be cannibalized for art, and I think I must’ve remembered it wrong or just decided on these words instead. I often feel embarrassed by the fact that I don’t have a specific explanation for it, so I just make things up sometimes.

I started writing songs for what would become Butcher The Bar in 2006/7 when I lived in Lincoln. I had a digital 8 track recorder that I hadn’t ever really used, so I decided to write some songs so that I could learn how to use it. I uploaded 3 or 4 of them onto Myspace and started sending them to people, I don’t really know why and didn’t expect anything to happen. I sent them to Morr Music and they listened, liked them, and got in touch asking if I had any more songs. I said I did, but I didn’t really. So I quickly wrote some more stuff to send over, these are the songs that would eventually become the first album "Sleep At Your Own Speed". By this time I’d moved to London working as an editor’s assistant, which was great, but the long days didn’t leave much time for music. As the LP came out (2008) I’d moved to Manchester, where I wrote the 2nd LP "For Each A Future Tethered" (2011), which I recorded with friend and producer Barney Freeman through out 2010 in his home studio in Richmond. We put together quite a long tour through EU in support of FEAFT, so put a band together in Manchester (plus Barney on harmonium/clarinet/keys). We played so well together and had so much fun that this would then be the band that would record "III".

Your fans have surely noticed that Butcher The Bar “went electric” in this new release. Sometimes this is an illusory change, meaning that the songs will just have different arrangements. In your case, the change seems a little deeper, in the sense that it seems you adapted your songwriting too, to fit the power-pop style of this record. Do you agree?
Yes, I think you’re right. ‘Going electric’ was both natural and intentional. I’d always preferred being in a band and was bored of playing acoustic so used the opportunity of this new band to do so. The demos for the LP were in between the old stuff and what would eventually become ‘III’, the band helped step it up to a more ‘power-pop’ style that was different to the folk-pop stuff we’d been playing before. I definitely wanted to write songs with more interesting arrangements and spent time doing so, but never with an actual genre or even any other bands or writers in mind. I just wanted to make the best music I could at the time.

Was there an evolution also in the band, during these years, in terms of members but also in your collaboration or in the sensibility of each individual, to inspire this change?
Absolutely. Everyone’s contributions improved the songs and facilitated the change in direction. I have to admit that only seems obvious now after a few years without listening to the album. When you’re in it you just get on with it, and I didn’t think it was all that different. After spending time touring and playing together you start to feel like a gang, where each member has their own role, and for that reason everyone’s personality came through on the record. We’re all still proud of it which says a lot I think.

You are releasing your record with the Madrid-based Bobo Integral, another of a small but relevant streak of Spanish indie-pop labels. Was this (i.e. having support from a label) one of the factors that kept “III” from being released? What is the role of a music label from your point of view, in these days?
Initially yes. We’d been knocked back by Morr for this LP, and although approached others too, we didn’t have any luck. Then we decided to give it away earlier this year, as an effort to move on and start making new music. We thought it’d be cathartic to put it out under our own imprint, and hopefully some people would still care enough about Btb to listen or download it. Obviously we always wanted to press physical copies, but we didn’t have the means to do so, so when Bobo Integral came along we were very pleased and excited for them to help us out. It was a nice confidence boost and the beginning of a brief but enjoyable period having the chance to talk about it again and see how people responded to it.

I think the role of a label is pretty much exactly what Bobo Integral are doing. They put out music they like, get it to the people who’ll like it, without any pressure. I think if the same approach was used at every level that would be a decent ‘industry’ to be involved in. My experience with labels is that they don’t often give much away, and can feel like they’re doing you a favor, not always great for your self esteem or creativity. You shouldn’t pander to anyone when making art and I think you might even unconsciously do so when working with a label, the reason it’s been nice with Bobo Integral is that the album was already finished when they got involved, but I imagine the process would’ve been just as easy if we’d have worked together during the making of the LP.

What is the situation, in this moment, for an independent artist, in the UK, from your point of view?
I depends what you want. If you want to make a living and live comfortably as an independent artist, you might struggle, and your quality of life may suffer. But opportunities to play music and express yourself and be heard is really great. BtB has been on hold for a number of years, but individually we have all played more than ever in other bands. The more you play the more you’re exposed to different pockets of the music scene over the country, meeting great people and amazing artists. I’d say if you can embrace this you can do what ever you want and feel satisfied, successful and appreciated.

What are your plans for touring? Is a full EU tour (including Italy, hopefully) something your fans can hope for? Thanks for your time.
We don’t have any plans for touring unfortunately. Although if the opportunity arises then definitely. Touring is the most fun you can have as a band, even the lows are still great really. But all this happened so quickly that we haven’t had chance to plan or prepare anything other than an album launch party (The Eagle Inn, Friday 23rd August). Tours in the past have often started by being approached by agents/promoters from other countries (including Italy) so you never know.

For Each A Future Tethered

Sleep At Your Own Speed