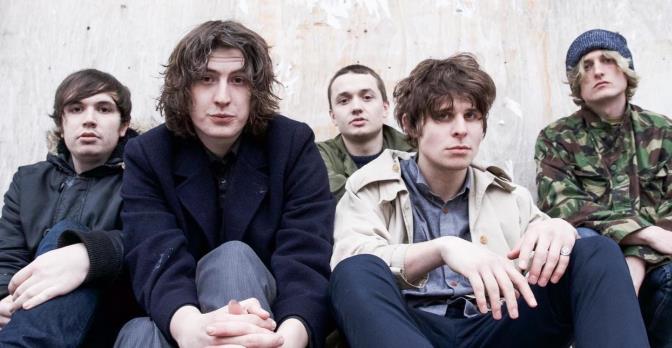 interview by Michele Corrado
Tweet
Hi Lee, where are you? How are you doing?
I am at home with my family and I'm doing extremely well. A little under pressure with the amount of work we have set ourselves but it wouldn't be a special moment releasing our debut record if it was a walk in the park now, would it?

Although you’ve produced already so many songs, your upcoming record is your first Lp. How different has it been to approach the record process of a full lenght?
It wasn't that all different from the last compilation as we recorded that as an album, but we diluted it to 3 EPs to make it more accessible for our culture that operates and evolves at an instant. The techniques used and the emotions produced were different but the quest and work ethic remained the same. We have entitled this one the difficult debut album. James helped us develop some of the songs that we hadn't completed writing whereas the compilation we had all the songs ready to record. Both influential experiences that have left us feeling stronger than before.

Nihilistic Glamour Shots has been recorded at Parr Street Studios of Liverpool, a place where have been written pages of rock music history. How has it been to record in such place?
We have the habit of making wherever we are our home so it didn't take long to get comfortable. Being a two minute walk from bold St it puts you directly in the centre of the Liverpool culture that we have developed quite a taste for now. James and Rich together make the dream team and our personalities complimented each other so immediately we had great ground to make a record.

And what about the supervision of two production gods like James Skelly e Rich Turvey?
Precisely what I said above. The two work as a chord and its one of the better chords like E or F.

Let’s talk a little bit about the artworks you choose for you covers. Till your last Ep they fully resemble a garage background, but something has changed with the one you‘ve chosen for Nihilistic Glamour Shots, which is quite dark, almost esoteric.
I can see why someone would view it as esoteric but I think that would be looking into it too much. The fact we clashed nihilism with satanic imagery is a philosophical mess. Nihilistic Glamour is a direct attack on materialism and consumerism which at the core feels soulless so we thought we would use the occult and satanism to sell our product. We have always been fascinated in the wicked and deranged and Aleister Crowley and his work was largely influential on our lyrics and aesthetic.

Disinfect Us, for instance, sounds quite dark too, something that listening to your Eps I wouldn’t have expected. It looks like you’ve widened your musical range with this Lp, did you mean to do so or did it happen naturally?
Again that was natural and how we felt. It's human nature to bottle anger, rage, dissent and this record was our moment to release. Everything being so of the moment that's just the way it happens. Music with darkness can be more powerful in creating euphoria.

Even if NGS si basically your debut, you’ve toured for years, we’re talking about over two hundreds gigs. Looking tot he many sold out your upcoming tour has already recorded, I imagine that the crowds you play in the front are getting bigger and bigger. Do you feel slightly intimidated from it or don’t you feel any difference?
At first I required a couple of drinks to perform as I spent my whole music career as a drummer so moving up front was unnerving for me, especially when there is such a thirst for the way we look or weigh today. You can pretend all you want that you don't care about it but it's now ingrained in our society we find it hard to expel our self from what we are told. But now it's like we, Cabbage, are doing what we were meant to do. We played at LCCC this summer and that was close to 30k people. It's more nerve racking playing to 5 people.

You come from a little town near Manchester, a city that has always meant a lot for pop music. Do you feel very bond to this city? How do you think ist he musical scene of manchster as today?
The scene is strong. There is band's such as. MOLD, Afghan Sand Gang, starlight magic hour, PINS, The Blinders, Mother, The Piccadilly Rats and many more. Manchester is our city and I'm proud of my city. Manchester has always been one of the first for human rights, multiculturalism and culture.

Is there any interesting new band you’re listening to lately? I mean, some brand new stuff you would like to reccomend to our readers.
Afghan Sand Gang are the newest band I know. They just sold their first headline show out and it's pure kraut-synth pop. Glorious.
Discografia