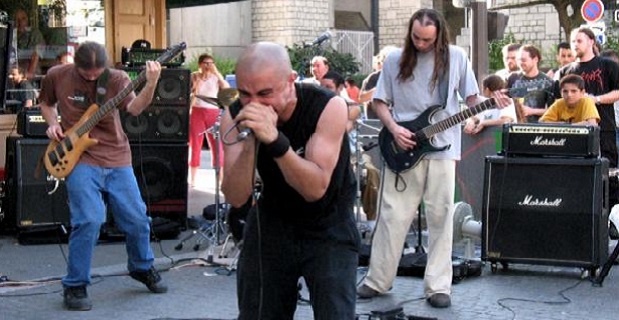 What about your pre-DaCast experiences?
Tibo was playing music with some friends and study music at the parisian school of music called "Atla". Sylvain was having a metal band called "Peryoem" and was studying music at the "Atla" too. Drixxe was the drummer of the death metal band "Whispering Tears". Abdel never had any experience before the band except singing under the shower or in karaokes with friends! Adrien is entering in the band recently, so he had time before to play with a lot of bands like "Third arm", "Sickbag", "Hellbats", "Hangman's chair"...

What are your most important musical and not musical influences?
We share few common influences as Dillinger Escape Plan or Converge but each one has his own influences, for Abdel, it is, for example, Mike Patton, Radiohead, Candiria, Guru, Meshuggah, Tool, Job for a Cowboy and for Sylvain, it's more bands like Comity, King Crimson or Behold... the Arctopus. But we listen a lot of music, we are always looking for a new song, a new album, or a new band who tear the roof off! So it's different each time! For the not musical inflences, we love old movies (50"s and 60's), documentaries against the capitalism, and also futurism and egyptology...

In the beginning, there was "The Undertown Experiment" demo, than “Smooth As A Riot” and then "Dédale"... How your musicianship is changed through these works?
The demo "The Undertown Experiment" was just some kind of way to know each other better and to see what we will be able to do together. At this time, we was just discovering the new hardcore way (essentially Converge) and we just came from traditional metal (death, neo or fusion). So it's already a crossover, but no so violent... Then we started to compose our first EP "Smooth As A Riot" which we wanted to sound more metalcore, trying to make something tougher and find our own originality. In the mean time, we discovered some crazy bands playing weird stuff who have also influenced our vision and our sound. Few gigs later, we started composing "Dédale".

"Dédale" is really an excellent album... very raw, passionate and creative... and it's a self-released album... No label wanted to release it?
In France, people in general and producers in particular are rather followers than leaders, they invest money only if they see you succeeding. And of course, the ambient gloom of the music industry does not help neither.

Is "Dédale" a concept album?
A concept album? If it is to be different than the standard or to gravitate around a particular idea, sure it is. But if you mean that it has been entirely thought and then designed, no, it is not. This album has been itself, a long journey which we hope, is not over yet.

I really like the cover... What does it represent?
Actually, it's a collage from differents covers of old 50's independant movies. But it represent a deadalus; a journey fraught with pitfalls; a modern labyrinth where some of us are kept stuck for ages.

How would you define your sound?
Something that brings together post-hardcore, noise, jazz, prog and other stuff which should be played very loud, something that smashes you on the face! (But play twice before listening...)

What "DaCast" mean?
It means "The cast" written at the end of a movie, so the list of people taking part of a piece, it is such as gang, crew, band, clan but in a cinematographic way.

Is DaCast part of a parisienne or french musical scene?
For sure, some slight part of the underground Parisian hard-core scene and we are slowly but firmly digging our hole.

What about the future of DaCast? Do you have new material to release?
Well actually, it's hard to say.. Some of the Dacast's members are very busy these days with another band called Cowards. They are often on tour, so DaCast is kinda sleeping this time and we don't have any new materials, only parts of songs... Anyway, if we write other songs, they won't be long duration like "Dédale", that will be the total opposite, very short and dense song.

What are the main themes of your lyrics?
It depends of every opus. As for "Dédale", it's about a stormy life path, exile, inner conflict, struggle against the system, etc. when on "Smooth As A Riot", it was about our consumer society, visual manipulation, violence and prejudices. We don't have particular main themes but we just talk about any items we do care about.

What kind of feedback have you had after the release of "Dedale"?
Most part of the reviews are very positive, a few reviewer don't like it or don't take the time to understand it. And there is some country were it was very well received like Italia for example. But, we miss proposition of concert and so far no label have made any proposition for producing another album.

I see on your facebook page a "Dédale" full movie clip... What about this movie clip?
So that video editing was done by a friend of ours. It is a long collage of old film in black and white, more or less kitsch and more or less disturbing. Normally, this should be broadcast on a screen while playing the song in concert. Point of the film should be synchronized with the music.
This is a little bit like the answer to collages colors on the cover of "Dédale".

Do you think that music can and should always have a political impact?
I don't think that music "should" have a political impact. It will always be a way to express so many different feelings, we need it to party or just to listen and enjoy, and it is also an outlet for revolt and anger. Well, now a day I think that it's getting more difficult to use it for political means of expression, cause the majors choose only bands which are politically correct . Also, when a band want a larger audience, they try to avoid this kind of subject. So, I don't think music could have a strong political impact in the western countries. It can only work very locally in very underground stages. Then, in many countries not democratic at all such as China, some Arabians country, Russia, etc. (a lot of countries in fact!), it still have an impact and as you know, you may even end up in jail because of lyrics!

Which are, from your point of view, the differences between the music webzine and classic print magazines?
There's no real difference, except the possibility for the readers to add comments and discuss online. I think it's always the same struggle between physical and virtual material as for the CDs, books, zines... The problem is well known, virtual may be free, so it means that physical will disappear and afterward, we will have to pay for virtual. It's just a change for sellers and consumers because of new technologies. It is a kind of transitional period.

Add what you want to conclude
We all know that this world is full of shit, but you can always enjoy a 35 mins trip out of space if you listen to "Dédale" ! So just do it, damn it!