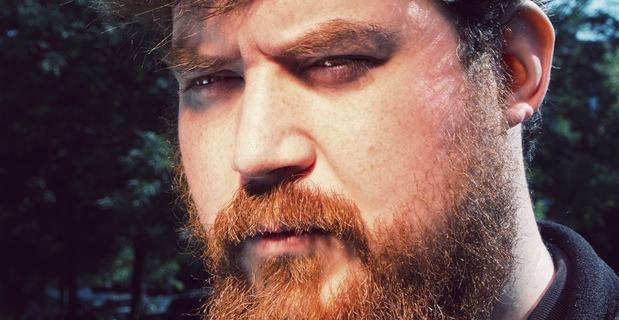 The adventures of a lonesome American

interview by Lorenzo Righetto
Tweet
Try to picture a young man, freshly arrived in a big city to study cinema. Nothing of the "professional" approach to art can really break through him, so he finds himself roaming the cityt at night - pretending to be its guardian, if not its master. One night he sneaks in the Hilton and takes the elevator to the panoramic restaurant, and ballroom, where everything resonates with past gala dinners, smiles and chatter. There a dazzling grand piano is waiting for him, a living object, calling for him, kidnapping him. Every night he goes to exercise at the piano, undisturbed by the night guards. Until a gentleman leaves a tip in a leftover glass, on the piano...

Can you suggest a song from "Daniel Knox" that we can use as the "intro" theme and as a guide to the record and your music in general? What is the song about?
The intersection of Lawrence & MacArthur is famous for car wrecks. I grew up on the corner in an old grocery store and pharmacy built in the 1920's. My mother and stepfather lived on the grocery side, and I lived on the pharmacy side. There were so many crashes in the summertime I used to sit on the porch with my video camera and wait for them to happen. More interesting to me than the wrecks were the people who came out shortly after. They were like informal block parties where people of all sorts would step out of their homes and stand on their lawns to have a look. I shot this video all on the same day in 1996.

It was really inspiring to find about the story of your beginnings as an artist, playing grand pianos at night in a hotel ballroom. Do you think you would be doing the same things, right now, or even be a musician at all, without that kind of mythological start?
I think if I hadn’t found my way to music, I would be telling stories in some other way. I grew up wanting to make films, and I still think I have one good film in me yet.

So there is this moment in your career when you meet David Lynch in the cinema you’re working at, and you get to play something on the cinema organ to introduce him. Did you actually meet him in person and what was it like? How does he influence your music? What do you think of his musical projects?
Meeting David Lynch was certainly an important moment for me. I grew up on his films. They spoke to me in a very direct way, more than anything else did.

When I was a kid I used to make films myself. I made them with a video camera, in my neighborhood, with friends. My brief interlude of proper film school told me this was no way to make a film and was incredibly discouraging. But when Lynch spoke about making “Inland Empire” he spoke about making it the very way I had done when I was a boy, and with the same enthusiasm. It was an important moment for me just to meet an artist I admire so much, but also to have him dispel a lot of the discouragement that film school and film people had given me most of my life.

“Daniel Knox” is the first album you record in an actual studio, so there are different instruments and sounds, other musicians and so on. It also seems to me that it is the least classical of your albums, in terms of sound, and songwriting too. It does have a “post” feel (sorry for the wording), it’s much more atmospherical and cinematic. Do you consider this the trademark of the record, its biggest artistic leap or achievement?
Well, “Daniel Knox” was what I would call an inevitable accident. We had gone into the studio to record my next record “Chasescene” and needed more time. We also had a handful of songs we knew weren’t right for that record because I had written too many. So, needing more time, and having extra material, I looked to two other projects I had been devoting most of the last two years to. “Black & Whites” and “14 15 111” are two video projects I worked on with photographer John Atwood.

“Black & Whites” is a collection of 12 songs and pieces of score which accompany video shot by Atwood and edited by the both of us. This was where “By The Venture”, “Lawrence & MacArthur”, and “White Oaks Mall” came from. We created “Black & Whites” at Robert Wilson’s Watermill Center and performed it at The 92Y in New York and The Kennedy Center in Washington DC. We played it in various incarnations but the full version is for piano, voice, drums/percusison, electric bass, string quintette, horns, melodica, and saw.

Footage of the finale can be seen below.


“14 15 111” was written for Intuit: The Center for Intuitive and Outsider Art. This is where “Blue Car”, “David Charmichael”, “Car Blue”, and “14 15 111” come from. As in “Black & Whites” the video is projected onto a screen behind the musicians who play in the dark below, but in this show half of the music is pre-recorded and in sync with the video with the musicians playing along with the pre-existing music.

Don’t take it bad, but I think the additional arrangements (brass, synths, drums, strings) really add something to your music. How did everything get in shape? Does it bother you not to be “alone” in your record anymore?
It doesn’t bother me not to be alone. I’m a musician, I can be alone whenever I choose! But I’m really proud and fortunate to be able to play with some brilliant musicians. My drummer Jason Toth, bassist Paul Parts, musical saw player Chris Hefner, string bass Jim Cooper, and I’ve added a really great guitarist to the band now named Joshua Fitzgerald Klocek. You’d like him, he plays in a band that covers Italian movie scores. I’ve also been fortunate enough to play with people like Ralph Carney, Thor Harris, and David Coulter.

But I get plenty of “alone” time (wanted or unwanted) when I’m on tour these days.

I was really impressed by the cover of “Daniel Knox”, it has a very plastic, vivid feeling, like it was from a resurrected painter from the XIXth century. At the same time I find it hard to really catch the main feeling you are showing, much as with the music. Finally, it is slightly unusual to see the artist’s face and name on the cover. Can you tell us about this choice and the cover art? What was the mood you were trying to capture?
The painting on the album cover is by the artist Gregory Jacobsen. I can’t overstate how impressed with him and his work I am.  I was thrilled when he agreed to do the cover. It became apparent making this record that if this wasn’t my “self titled” album, nothing else would be, and since it was somewhat of a departure for me I wanted the cover to reflect that. I think it’s something of a departure from Jacobsen’s work too, though only in the thematic sense.

I did not understand whether you are still working as a projectionist, but surely cinema has played some part in your development as an artist. Can you connect a movie to “Daniel Knox”? It sometimes reminds me of “Shame”…
I still work at The Music Box Theatre in Chicago. I will as long as I live there because I love it so much. It’s a beautiful place to see a film and an inspiring place to be in general.
I’m not sure I can connect “Daniel Knox” the album to any movie apart from that in my imagination which remain visually unmade. If I were to connect any one movie to myself however, I would probably have to say The Marx Brothers’ ‘Duck Soup’.

Places like malls and highways, let’s say the landmarks of the American landscape, populate your songs. You once said in an interview: “I wrote a lot of love songs about stores.” I sometimes find this in American artists, and I asked the same question to Matthew Milia of Frontier Ruckus. Is this your way of casting a net of mythological places, to find a geographical simbology of places which mean something to people, in a country where historical common grounds are not so defined?
I’m not sure I understand the question.I think a lot of people write about malls, highways, and roadside construction or decay with a critical or nostalgic angle that doesn’t interest me. For me it was a matter of discovering how much the landscape I inherited growing up had actually infiltrated the landscape of my imagination.

If there’s a mythology to be found in my songs about Springfield it’s an abstract one with a loose thread and a lot of space to move around. I’m not interested in defining any of that stuff nor rendering some biographical tale of my boyhood. I’ve just started to pay closer attention to places I’d taken for granted, mainly because I’ve seen a lot of them disappear in recent years.

It was interesting to find that your second record was released by La Société Expeditionnaire, run by Lou Rogai. He is another of my favourite contemporary artists, so can you tell me what your relationship with him is?
I know Lou Rogai well and he’s someone I greatly admire and adore as a human being. He’s a tireless creative force and someone I’ve learned a lot from. His new record is quite good as well.

In 2013, there were rumours that you would be completing a trilogy, made of your first two albums and “Chasescene”, your would-be third chapter. Then “Daniel Knox” came about, but “Chasescene” is still in the making. Can you tell us about “Chasescene”? Will it come out on Carrot Top as well, with the same recording process?
“Chasescene” has been recorded. As I said before, “Daniel Knox” came from the same sessions. There are just a few overdubs and the mixing to be done. I’d have done that sooner but I’ve been touring most of the year.
I’m more proud of “Chasescene” than anything I’ve ever done. I’ve been writing and re-writing songs for it since 2006 so I’m very anxious for it to come out next year.

I was at The Handsome Family concert a few weeks ago, here in Milan, and it was very crowded – I guess it is no big mistery that their success was helped by True Detective’s opening song. Are you planning on some movie/TV collaboration? Can you tell us the name of a movie director you’d be thrilled to work with/for (besides David Lynch, I guess)?
I’ve been writing for film one way or another for years, but scoring a television series is something that’s intrigued me for a long time now. I really admire Michael Giaccino’s score for ‘’Lost’ and Brian Reitzell’s music for ‘Hannibal’. I love film score in general but television offers composers such a large canvas to work with; themes that can evolve over the course of years and develop over time.

I would love to write music for a Wim Wenders film someday and I think I would love to do a proper action movie score. But really any filmmaker with a clear and interesting vision would be something I would look forward to.

I’m also very interested in radio at this point but not sure what my place in it is.

So we don’t have a thousand people to shoot while playing one of your song, but can you promise you’ll come to Italy on your next European tour?
No promises, only wishes I hope will be granted.

Won't You Take Me With You