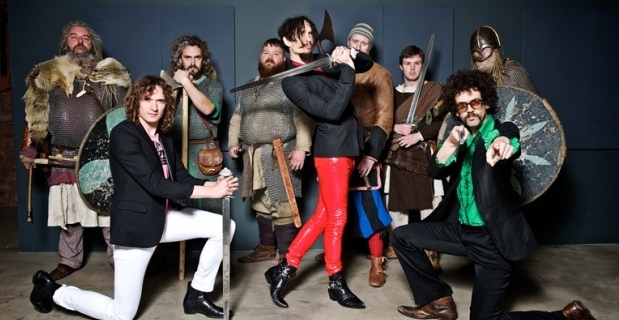 The beginning of something beautiful

interview by Stefano Bartolotta
Tweet
We met Justin Hawkins during a promo day in Milan on March 27th. Listening to the album makes you feel that The Darkness are in their best moment ever, and the frontman's answers clearly showw that the band has the same feeling too.

I could listen to your record only this week, but actually I listen to your music since the very beeginning, since 2003, and I have the feeling that this is your best record.
(he slaps me a high five) I agrre with you. I know there’s a lot of people who love the first album, probably there’s a lot of people who loves the second album, in America, when you speak to American fans, it’s their faavourite. For me, when we’ve done sonething, I can’t listen to it again, I think about the next thing, but this is the one I listen to a lot, I’m really proud of it. I don’t know if it’s because I’m older or because maybe it’s better. Maybe it’s the beginning of something beautiful for us.

When the band didn’t play for some year, did you have the feeling that it was definitely dead, and so now you feel like this is a second life for the band? Or did you feel that the band was never dead and sooner or later you would have done something new?

I don’t know because I’m not really dealing wwith absolutes like that. The situation was always very fluid and I think there’s a trajectory for a lot of bands, like you breakthrough, you keep doing, you keep working, have a rise and a gentle fall, over a long period of time. I always thought the story wasn’t over, but I had no idea which way it was going.

Before this album, the second one was the most ambitious, because you added a lot of instruments, but now I feel this album is ambitious the same way, but it’s a different kind of ambition, because I feel that you picked up an almost traditional rock set and tried to do different things with your rock instruments, apart from that synth used for an intro of “Mighty Wings”.
That’s not a synth. It’s Dan’s giutar but it’s through a setting that generate synthetizer’s tones, but actually it’s Dan playing guitar. There aren’t any synthetizers, there’s a piano on “Sarah O’Sarah”, there are keyboards on “Conquerors”. It’s partly money restrictions, we can’t have a sitar and we can’t have a special pipe and stuff like that, but I think it’s important to achieve the sound you’re doing on a record with the four of us live. I’ve alwayse been quite resistant to the idea of a fifth person on stage, I don’t like that, when I go and see a band I wanna see the band, nobody else. We were trying to make sure we could achieve in a live capacity.

There is a lot of variety in your vocals, much more than in the past. There is your trademark falsetto of course, but there is much more, you are angry sometimes and I never heard you singing so angry.

It’s weird, what happened was kind of when writing, I had to find my melodies and I was pretending to be a character that was angry and then I thought there’s no reason why you can’t sing a song like that. Then I thought of Freddy Mercury, there’s a lot of different voices that he was singing, even in the same song sometimes, he really changes the character. So I’m quite happy to explore that a bit more, singing in different styles and also doing thematic monologues. I think in the future we’ll develop that more. It’s the first album where we’re experimenting in that way.

The only song I found hard to pick up, but now I’m starting to like it, it’s the opening song and first single “Barbarian”. I was quite surprised when I listened to the rest of the album because I found “Barbarian” the least immediate one buti t was the first to be released, to make people know that The Darkness were back. How did you choose that song?

We chose that one deliberately, because we didn’t want to put a teaser song out there, who could have gone on the radio. Someone may have perceived ita s a failure, because if you got a radio song out and it’s just a teaser, people would have said “oh, your first single can go on the radio”. Instead this was an opportunity to share something a bit harder and challenging for our fans. That was deliberate.

So, for what you said earlier, we can expect that the live sounds quite faithful to the album.

Yeah, I think you’d be surprised on how close we can get to.

And are you the usual charismatic frontman on stage with costume changes and your moves?

We have to think on how we’re gonna approach the look of it, but yeah, it’s the same as The Darkness with new songs we’re excited to play. We’v arleady done a few shows in Ireland, and we played “Barbarian”, “Open Fire”, “Roaring Waters”, “Hammer And Tongs”, we playeed these songs live and they were really good to me. It was challenging because when you play a song and nobody heard the album, you really have to stay with the song, it’s exausting, cause you have to sing it so clearly, so precisely. Once it’s out you got your fans making noise and it doesn’t really matteri f you miss a beat, so we didi t and we really enjoyed playing those songs.

Probably, when you read the album reviews, you’ll read that your musical style is quite clearly related to the kind of rock music called adult oriented-rock. Would you be happy to be described just as an adult oriented-rock band or would you like people to understand there is something more?

I think the adult oriented-rock is a very broad spectrum, and probably the most part of our influences are drawn from that spectrum. So I’m quite happy with that. There are a couple of thing that influence us that are outside of it, but they’re not enough to justify an exclusion. So, if it’s about categorizing, adult oriented-rock is fine because you have a lot of freedom.

Listening to the record and trying to pay attention to the lyrics, I think that probably the lyrical style is what remains almost the same in all your albums. Epic attitude, big landscapes, tumultous things happening, …

Before we started writing, I was writing a lot of poems, and I was really determined to have them as a body of work with really complete ideas that could stand up on their own in poetry, I wanted them to be strong in that way. So I had books of stuff to pull from, and whenever something came I was able to choose the lyrics. It’s alwayss the same style as in the past, but this time I was much more prepared, so I’m very proud of it. I think it’s a Darkness album but in high definition.

When you read or listen to interviews of big bands, they often say that to become big, you have to want it since your very beginning, when you are in a small rehersal room in a basement and you play just for yourself, you have to want to be big. Is it the same for The Darkness?

Yeah, that was great, we headlined there! So, the goals we were aiming for were actually quite achieved, and now we’re ambitious in a different way I think, there are none of these dares, nobody dares to say that again, but it’s more like we’re gonna make an album thaat we’re proud of and that’s it, that’s what we can do, what we can have control on. It’s ambition, but creatively, and we are happy to work with label partners that simply appreciate where we come from and don’t even try to interfere with creative process.

A lot of big artists and bands have a say about the streaming services to listen to music. There are people that don’t like the business model and the share that goes to the artist and stuff like that. Are you interested in this, do you have an opinion, or do you just think that people should listen to music the way they want?

I joined this Spotify and I did have an account and I don’t have it anymore, because it turns music into sonething totally disposable. I think that’s a shame. I’m not that outspoken about it but one of the things I did in the last couple of years is I bought a record player again, and I’m really happy that vinyl is becoming much more popular, the ceremony of putting a record on is really special. I’ve got a little girl, she’s one and a half year old, we put records on together and she’s really excited to see the needle go down and she dances. So now, records are part of her upbringing as they were of my upbringing and I think things always swing back. We’re lucky to be probably the last band who spent money on a rock video. In the medieval times, before record players, musicians were providing a service, you’d get paid a chicken for doing a song, and live music was the service you provided. Then records came and there was an ownership of recording, so the music beecame a product. Now music is a service again, because you have to do gigs to survive. I think there’s something special about records.

The photo on top is from Scarlet Page

Last Of Our Kind