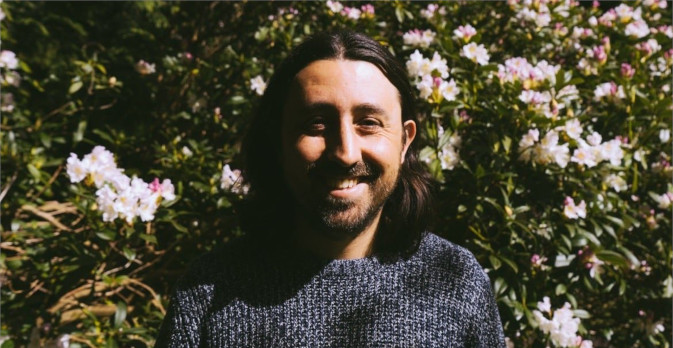 Well, first of all, David, thank you for your music and for such an inspired record. Since there is little information about you on the Web, would you like to start by giving us a brief introduction to your career as an artist and musician?
I’ve been playing guitar since I was 11, and started making home recordings when I was 15. I’ve been making ‘albums’ fairly consistently ever since but only felt ready to properly release something with St Clears in 2014. I love recording music and would still be doing it if no one was listening. Over the last few years I’ve been performing a lot more and I’m gradually growing in confidence as a performer. I just want to keep getting better.

Five years passed between your debut album, “St. Clears”, and this new “Travelling Bright”. Looking back at these five years, can you reconstruct a path that led you to this second album?
I was beginning to write "Travelling Bright" even before "St Clears" was released, and midway through composing I moved from Herefordshire to Cardiff, which was an exciting time as I was able to meet lots of great musicians, and start playing live a lot more. I got funding from a BBC/Arts Council scheme called Horizons, to record an EP, with some of the songs that were going to be on the album, so this gave me the chance to try recording at Fieldgate studio near Cardiff, with producer Andrew Lawson, and 2 great musicians that I had met - cellist Kirsten Miller and bass player Aidan Thorne. I was very happy with those sessions, so I was then confident about making the rest of the album there with those guys. The EP was released on Welsh label Cambrian Records, who have now put out the album, so making these connections in Cardiff was really what brought the whole project together over those years.

I read that at least some of the songs were conceived in an altered state, caused by the insomnia you were suffering from. So it seems like the core of the songs comes from a specific time in your life. Can you describe it to us?
It was a very exciting and intensely creative time for me, and I was struggling to sleep. Often I would lie awake and be unable to stop thinking about the music I was composing. Hypnagogic images inspired a lot of the lyrical imagery. The album comes from a definite 2 year period where things were very up and down and I had lots of strong emotions, and experiences I needed to express. I’m sleeping very well these days!

How did the arrangements evolve? Did you start recording with specific ideas about the final form of songs or did they evolve in time, maybe as a result of collaboration with other musicians?
Most of the arrangements came about through making lots of demos by myself at first. Lots of the songs came from separate fragments and ideas that I had to stitch together and they evolved lots with each demo. It was kind of a big puzzle. Robert Pugh who played on "St Clears" had some great ideas for piano parts on 2 songs, and I recorded the demo drums with the help of Adam Huyton who produced "St Clears". Kirsten Miller, who plays cello on the album, recorded lots of amazing stuff on the final round of demos, and her playing was extremely important to how the final arrangements came together. When it came to the proper recording sessions we largely followed the demos note for note, but there are parts where Aidan, Kirstie and Daan Temmink on piano all improvised, and I love listening to those parts now.

In our review, there is a statement that says: “This record could exist even without a voice” – not to discount your voice or vocal melodies at all, but this seemed to me quite a new feature to your approach to songwriting. Do you agree?
Yes I hope they would sound good without the singing. The music is just as important as the vocal and lyrics for me. There are lots of instrumental sections on there. It somehow didn’t really feel very new to work like this, as I’ve made lots of instrumental music in the past, but yes it was fun to mix that sort of arranging with the songs.

There is a strong sense of nature in “Travelling Bright”, such that many reviews around describe the record as a perfect companion to a walk in an unexplored area. Is there a natural place that you relate the record the most (I’m sure Wales abounds with examples)?
On the album cover there are fragments of photos that I took, that are from places that were inspiring to the music. Park Wood at Hergest in Kington, Credenhill woods near where I grew up, Cefn Onn Park in Cardiff, (where the inside photo on the album was taken), Ystradfellte waterfalls, and the Whitchurch canal are some favourite places I like to walk.

Can I ask you about the situation, right now, for a young musician/artist in the UK, from your point of view, in terms of opportunities?
I think the opportunities to record music by yourself are better than ever before - you don’t need a big studio to start being creative with recording. And I think there are lots of opportunities to start performing too. But there are probably more people than ever trying to make a career out of it, and there are so many incredible artists around doing great stuff, that I think you have to accept that there’s no guarantee that you’re going to make a lot of money. There’s huge competition for very limited funding too - so I think doing things DIY, and having a good time with it are what’s important, and probably most healthy and fun for young artists. As long as you’re doing stuff and trying to make things happen for yourself, you’ll be improving and learning all the time.

Can we hope to see you play in Italy in the near future? Thanks for your time.
I would love to play in Italy and around Europe sometime in the next few years if the opportunity arises. If the UK leaves the EU I expect things to be more complicated but I will do my best to keep performing further afield.