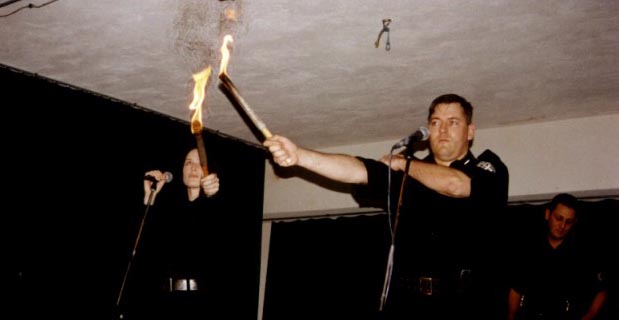 From Darkness to Lsd

First of all I would like to know about how did you give birth to your project … what was the aesthetics, the imaginary, the artistic context that influenced you the most and in which way?

Well, initially….and you probably won´t belief – Der Blutharsch was just planned as a “one off” project to release an album I recorded which didn`t fit for my former band. So the plan was to release a 7inch followed by a 12 inch – both ultra limited – and then lay Der Blutharsch back into the grave again. But then thing, as always in life – got a bit crazy – my former band did just burst like a soapbubble and I suddently had time, energy and passion a gogo.. and secondly – the reactions to the music was amazing – people loved it, and so I decided to continue it. And since, I never regreted!
The aesthetics then was quit martial – as I was interrested in a lot of aspects of the 2oies and 3o ies – and these were times of constant “extremities” – which somehow got reflected in our work and image and style. I think it was quit “brutal” in a positive way then… long ago, hmmm……and since things changed slightly….

From the very first LP, released in 1996 to now, your music has come through several transformations. The first period that ends in 2006 with “When Did Wonderland End?” and the second one that ends with this new release. In the first case you introduced more wave influences and in the second you have begun to follow more psychedelic elements. What do you think about it? What has marked these changes?

Now looking back over all these years..yes…its really funny how we changed!
But – “Change has to be an essential part of life!” – if you never change or move you are dead!
And for a band its quit important to change – or at least to be “on its way” – to be still hungry for excitement..to find new ways, new sounds, new abitillities!
Talking as a “musician” – which I am not, as I see myself more as a “soundcreator” – the most exciting thing is to still discover things..be hungry for new experiences . or as Goethe said..”the journey is the destiny!” – which is totally true.
I love to work on music, songs etc..but as soon as its done, I loose interrest in the little bastard! – and am heading towards new targets!
So, obvioulsy – or not – but be aware that we might change again and again….!

What does the new LP represent for you? What concept, what idea is behind it?

Its another album….and that’s it! And emanwhile we are working already on new stuff…so for me the last album is already hiding in the clouds of the past! – and I do not want to waste any energy or thoughts about it – as I want to collect all energies for new adventures!

The new LP shows new and interesting aspects about your style. In particular compositions like “Acid Haze” and “The Final Stand” seem to be influenced by 13th floor elevator and ‘60s LSD scene….

Hahahaha …well…..I think you got to the point! Somehow…..both, LSD and 13th floor elevator are not the badest things in life..besides some other pleasures…..but they still might be waiting to be discovered? Lets see….

The number of collaborators you have involved in your project is always large, is this the “infinite church”? what is the “leading hand”?

Not really..or maybe yes?
I always liked to involve people I like, adore their music or think they are Genius individuals in their own heoric or tragic way – to involve in my music and make them a little part of my life. Its all about this. I am a privileged person to be able to work with such talented musicians. Lets just pick out Matt Howden…have you hear his last “Sieben” album? If not…you don`t know what we are talking about..but to be able to have just to “call” ad people fly in to be part of what we do is … I still can`t find the right words about this all…..its really, REALLY a privilege!
And I am – not proud..that’s the wrong word..but very deeply oved to have all this happening!

What is the meaning behind “Birds of prey” (in which I found a darkwave taste) and “Reincarnation!”( astonishing and epic in its Indian shadows)??

There is no “meaning” – or do you really belief into meanings?
Everything is meaninless – more or less…compared to the world and all going on every day…what are we? Not even a grain of dust! So, don`t ask about “meaning”..hahaha. It’s a song..that’s all! Tunes and rhydm and some lyrics……and if you like it..even better! If not, it will be forgotten even before it starts to be a memory!

The new album is crucial also for the presence, for the first time, of titles. Does it mark a radical change in your approach to composition and the structure of albums?

Not a radical change for the structure of an album, as for me, after finishing the songs and working on the artwork…the track order is always the most important thing…I see an album not as a collection of songs but as an internal project – and the trackorder is an important way of making an album “flowing”or not flowing…..so, titles are not essential for me. BUT … it was something new…and new things are always a challenge. But tiles are nothing..just titles!

What could you tell us about the collaboration with Aluk Todolo? How was it born and how did it influence your sound?

We met first on a festival we both performed together in Hollan some years ago…..and although I at that time didn`t know their music I liked them…as persons. Jörg, our guitarplayer already was a big fan of them..and luckilly he intorduced me to their music, to make me a fan imediatelly as well…..
Then we played Paris on the last tour and they were part of the organisation there – we got along very well, these people are such fucking nice people….we had fun and laughs and deep human respect..and one day I just thought I would like to work with them..and they luckilly wanted to work with us as well. So we exchanged two basic track each which the other had to work on, and – voila…that’s the long story in just a few words.

Now a boring question, I’m sorry. Many musical journalists has always marked your project as an example of the neofolk\martial scene, but you always rejected their opinions.. why? What is your idea about the evolution of neofolk and martial scene?

I never really rejected to have been part of this scene…as in the beginning I think this was my place to come from. – somehow. But I never really felt that we were a Neofolk band or did do neofolk music – even in the early days….and martial? Hm..its just another boring label. And then – at that time this scene was quit interresting and fresh and quit wild……so many sexy uniforms….but well, uniforms are always changing …and suddently you discover new sexy dresses which attract you more…!
An even more sexier people!
Meanwhile, I have to say..the Neofolk scene for me is a dead bird…..its over – and it should remain over….If I look at all the new bands in this genre – which fortunatelkly I o not do too often – its all boring and uninspired!
Martial Industrial is deaaaaaaaaad!

Do you have a clear idea of your path for the future? Do you have planned anything about new collaborations and material?

Oh my dear….yes.,…unfortunatelly.
I hoped to make 2o12 a sleazy year for us and get a step back..but as I already mentioned….”lets get rid of plans!” …
At the moment I work on a collaboration with Skullflower. It’s a dream which suddently became true..I follow this band since 15 years and always loved what they did..and one day I got a mail from them that they would like to work with us….so, you see….how much beter can life get? And I have to say..this collaboration is quit intense.
Then I work ona brand new album which hopefully will be ready after summer…but I am quit positive..and last but not least I am working on a collaboration with Austrian band Fuckhead together with Josef Dvorak (on volas) – who is founding memner of Wiener Aktionismus and a well know “Satanist” expert……
And – besides of this, to make the list even more expressive…Dave of White Hills is working on a new solo albuma nd wants me to be part of it somehow..lets see what we will come out with in the end……!
The way is thee destiny! 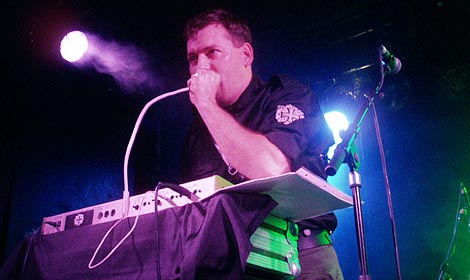 DER BLUTHARSCH AND THE INFINITE CHURCH OF THE LEADING HAND + SKULLFLOWER

DER BLUTHARSCH AND THE INFINITE CHURCH OF THE LEADING HAND

DER BLUTHARSCH AND THE INFINITE CHURCH OF THE LEADING HAND

The End Of The Beginning

When Did Wonderland End?