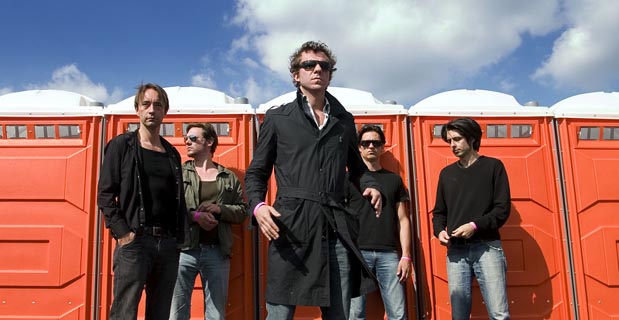 Cohesiveness and intimacy seem to me the commitment of the record, is it just an unpredictable resultor was it a goal, a specific necessity to you that guided the recording sessions?
We wanted to change a bit the environment of the songs, the mood of the songs, because we thought that "Vantage Point" was a bit colder sounding than other previous records. Although we had some good reactions, for instance from Italy, but other countries, other territories were like "what?". So also for us because it was a pretty dark record, "Vantage Point", we wanted to resurrect the lightness of it and also a bit less full, less crowded songs. Also production-wise we had some malcontent; we were a bit malcontent about that, so we wanted to have it more light, more dynamic, less compressed.
So that's what we did, that took us a long time - two years and a half just to record, to write the songs and mix it. And then we did another two months mastering it, because we had two or three different guys mastering it and it always turned out really bad or too much bass, not enough bass, like very high pitched. We had Bob Ludwig doing the mastering, who's a world-renowned name, and although he loved the record, he turned it into something like american college rock, that was horrible. That was actually the opposite, the thing we tried to achieve with more warmth in the sound, he just cut everything out - so that wasn't a good idea.

This record sounds classic and fresh at the same time, compared to other records of the band it is harder to identify external musical influences. Do you agree?
Yes, I do actually. Because we had like 35 songs and we wanted to mold out of these songs, we wanted to create a small universe of maybe twelve songs, but then, because we had a lot of songs, more than double that amount - we thought "why don't we do a double album?" where we have the poppy side and the more experimental side. But that didn't work out, because we didn't have enough time.
We recorded like 20 of the 35 songs, but we only used nine. So we used the songs that fit together, also mood-wise. I think that was the only inspiration to sample a record as a whole and not the obligatory soft song here and a rocking song there, then a ballad there and a poppy song and a single there. In that way it's a different record than any other record.

What were you listening to at that time?
Not much. When we did "Vantage Point" everybody was listening to "Do" a lot - ten thousand times a day, we fucking destroyed the record! What you are listening to influences in any way or the other what you are making; so we decided not to listen to anything - the only thing that maybe influenced us a bit was "Max Roach and His Orchestra", we wanted to have a sequence of this, like in "Dark Sets In" you have the (humming melody of the bridge in "Dark Sets In") that is a bit based on that, but for the rest I can't come up with anything. 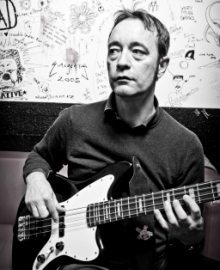 Two adjectives for Greg Dulli…
He is very funny and he is one of the best singers of this time; best rock voices of this time. We are very glad we have him on the record. It wasn't planned at all, we had the song almost finished, we were mixing it. Tommy said "We need something else, like a screamy voice on it, to left the hard parts a bit more". We were thinking about having a guest vocalist on this record but we couldn't find out who to ask.
So eventually we didn't ask anyone, but all of a sudden he was playing with the Twilight Singers and Tommy met him in a bar and said "Hey, why don't you come over and sing in the studio?" and he was like "Yes, sure man!". Everybody was like "Is he serious?", I  mean, but he was there and he did two songs. The bar is called "Kassa 4" in Antwerp. He was playing in "Trix" (Centrum foorMuziek, Antwerp) and everybody goes afterwards for a drink in that bar.

dEUS has an incredibly close audience in Italy, where you play often. Do you have any particular memory or anecdote of this country?
Italy is a beautiful place, I remember in Rome, we played in this park, that was huge, with trees and everything... It was like a forest, a wood. And we played in a conservatory as well; with the Amphitheatre; that was nice as well. Ah, near Bologna, at Ferrara - one of the most beautiful spots ever I played in the entire universe. That's lovely man, the way the sun sets and the castle and all the people - we didn't know that so many people were coming to see that... just beautiful.

Speaking about the live show: How many songs did you prepare and which criteria do you use to select them? Did you have a specific feeling for this live show?
Well, it's the sixth record and you have to please everybody - but we prepared like 35, 40 songs. But we still rehearse on stage when we have the soundcheck, we listen to the songs on the iPods and play them that night to keep it a bit on edge. But lately we were saying goodbye to the older stuff, because most of the time it doesn't blend with the new stuff - or it blends but the stuff from "Worst Case Scenario" is sometimes very happy flappy and this new stuff sometimes very dark and longstretched, more emotional - so that for Tommy it becomes too emotional to sing them in a row, because he wents so deep lyrically, it's like searching all the time in front of 2000 people... Well, he should have known before writing them. I think we found a good blend now, our setlist consists of 20-23 songs and it varies, from old to new stuff...

Just like you did on Bruin Festival in Maastricht; a good mix between old and new: I loved the tracklist.
Yeah, I remember that. But we change it a lot of times, for don't become one of the bands that play the same setlist over and over again, it becomes groundhog day, different setting same set, you know?

This is the first dEUS record collectively composed. And you said that now more than ever you fell closer to the image of the band, even if you are not the commander in chief, which is unusual and remarkable. What has changed?
The introduction of three new band members with whom it works, we introduced something new to dEUS; a new kind of sound, a new injection of more rhythmically stuff, I am more of a rhythmical drummer like the previous one was. And that synergy gives different kind of ideas, normally Tommy would start with a guitar lick or a whole song... we are all very creative and we enjoy playing together, there is no trouble, no discussions, I mean in the past there were...