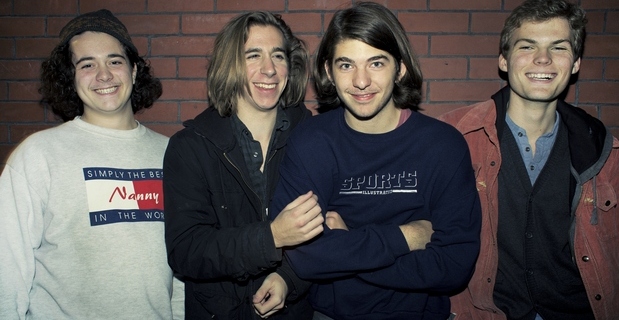 We sent some questions by email to The Districts, who are currently on ytour in USA and Europe, and will play in Italy on April 21st in Magnolia, Milan. The answers are by the drummer Branden Lawrence and showcase how these four guys are united as a band alìnd all their passion in making music

Your popularity is increasing fast after this second album, at least here in Europe. This probably means that a lot of people, including me, will be listening to your first album only after this one. What should they expect?

I'd say it's more all over place stylistically. I'm still proud of it and think people will understand us more if hearing it.

How is your songwriting process? Is there only one songwriter or is it a collective work?

Robby usually comes into the den with a new egg(or song) and we all help crack that egg and make scrambled eggs or over easy, hard boiled , etc.

I think that one of the most important plus in the album is how dynamic the guitars are, the texture between electric and acoustic ones is always different. At what point does this come when making a song?

Rob and pat are pretty tone conscience, and love weaving guitar parts that attempt to make the song sound full and interesting.

Another thing I find important is the use of the rhythm section. You here all this energy on guitars and vocals but the rhythm is always kind of controlled, but in the end the energy emerges clearly even without a properly ferocious rhythm section, and I think this adds personality to your music. I’d like you please to tell me whatever you want about this.

Sure, me and Connor try to lock in with each other tightly and not play over the song, but try and do what might work best even if it's  the simplest thing .

Because my mother language is not English, I confess that my attention to the lyrics eventually comes only after the music. Are lyrics important in your songs? Would you like to give me a general description of your lyrics?

It's okay! And yeah they play a big part. I love robs lyrics and he writes really truly to himself , they're usually autobiographical lyrics, and people seem to relate to the words.

You are from US but you are touring extensively both in your country and here in Europe. Are you getting better reactions here or there or are the feedbacks equally good everywhere?

We haven't reached the middle USA yet on this your where we've basically never played. But Europe is going great, it's hard for us to gauge our popularity because we've never touring mainland Europe or have done an extensive American tour.

There are already a lot of positive live report on the internet, but I would like a description of your live shows in your own words, while waiting for your first Italian date in April.

I really like the cover art of your album, please tell me more about it.

It goes along with the title of the album "a flourish and a spoil" the rotting grapefruit on a stem is supposed to represent both the flourishing themes and spoiling.

Haha not particularly, we don't watch too much sports but go eagles!!! And roebling is a bridge /street in New York. A great man had that name before his ultimate death.

You Know I'm Not Going Anywhere

A Flourish And A Spoil