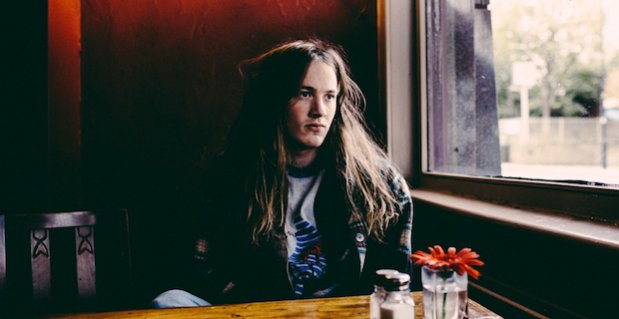 The wise young man came from the countryside

Dear Joseph, first of all it's a pleasure to meet you, although digitally. Where are you now, actually?
Grand to meet you too! Just got back from a handful of live sessions in London. Back in Leeds currently indulging in Nirvana and spaghetti. an unbeaten remedy for a hangover.

Eaves: "the lower border of a roof that overhangs the wall; a projecting edge (as of a hill)"; is there a meaning in your moniker?
Nothing direct or fanciful. I discovered the word for the first time in a short story by Thomas Hardy. Lacks meaning but I thought it was beautiful with a typically English rainy sentiment. I had been looking for a new moniker and I guess ‘Eaves’  showed up at the right time.

Listening to your debut LP I have felt your deepness. 23 years-old, you write like an young adult. Where do your thoughts and words come from?
You just built up on experiences and note down whats going on along the way. I don’t think it has anything to do with being ‘deep’ so to speak, just being honest with how you’re living. there’s enough people around hanging a veil in-front of their faces to hide how they feel about the world they’re observing. its mostly just notes of what i see day to day, less of a direct sentiment and more of an accumulation of moments over a period in time.

Nick Drake, Jeff Buckley, Neil Young.. Could you please explain something more about your music influences? I was reading that you listened a lot of metal music and so on..
my music taste in my late teens was kinda split between that singer songwriter stuff and harder rock. pearl jam and mastodon had as big of an impact on me a Nick Drake or Nina Simone. i'd rather not be considered just a fella with an acoustic guitar because i think there’s a lot more to the music then that. And I certainly want to move into more of a harder band sound. thats the music I use to love playing when I was a kid and I’ve finally got a band that could bring that sound to the forefront.

What living in Leeds? How, in your opinion, environment influences people or artists? Are you an artist?
I think anyone who creates anything is an artist, writing a diary or doodling in some note book is the same kind of personal release as forms of art like literature or painting, just more stark and unpolished. every persons environment they’ve grown up in chips away at them and moulds them to at least a point where they can survive in that place. its harder to be autonomous and ignore that environment than it is to embrace it and try to understand it.

Looking to your cover album we can find stuff, objects supposing to be linked to you / your life: is it true? is it a frame of your small room? and last of all what does "What Green Feels like" mean?
I grew up with the artist who created the cover (Sam Caldwell), and we both wanted to be as personal as we could to keep a balance with the music. We both accumulated trinkets from our childhood, families and short histories. Things like my granddad’s capo, photographs on the day of the paris shootings… It’s not meant to represent a room, we were playing with scale. The importance of these things we keep and questioning why they are important to us. The title is about an internal battle I have with myself between wanting to live in the city or the countryside. I guess its just about being aware of how things such as colour can have an affect on your decision making.

Your fingerpicking style brings to memories others great composers from the past: "Which kind of feeling or emotions do you have with your instruments (Guitar, Piano)? Will you be able to define them?"
I think if you play guitar to relax or as some kinda of escapism then you’ll always find colours and sounds that reflect what you’re trying to escape from. They’re not all happy but not all sad, they’re the grey in-between the black and white. I think I’ve always felt I gravitate towards a darker sound overall. and I guess the fingerpicking style is influenced by the players I love as much as any emotional connection with the instrument. you can define the playing style in the sense that if its harder its likely got more fervency to it that a lighter song.

Within 9 tracks of your wonderful and extremely sincere debut are there any songs which are you fond of? Why?
I guess the longer and heavier compositions. “dove in your mouth’, ‘Hom’a’gom’ and ‘Purge’. Dove was the last song I wrote for the record and lead into a new kind of style I’m working with for my second. There were songs that had more of that developed sound that simply weren’t finished quick enough to put down. it seemed important to me to juxtapose the other intimate songs. I wanted it to have space and movement, to be loud as it could, and that quite too.

"Father, you're drunk.. / Mother an ocean.." you sing in "As Old As The Grave". Did you live hard and rough life events?
I live away from my home town and moved away from the house I grew up in quite a long time ago now. I don’t live in any kinda of rough environment, life is good to me at the moment. My upbringing was tough but everyone has these weights on them in some shape or form. its just finding the right route to improve your situation. another place to help you realise what you need.

You started your first World Tour and i guess it was awesome when you supported Phil Selway on his last album tour: How is it? Will there be a chance for Italy?
touring’s pretty new to me but I’ve had an intense introduction to it over the last year. great supports with Selway, Mulvey and Boy and Bear. Get started with the first headline tour starting on May 5th with the band. and yeah we’ve managed to sort three shows in july! (8th, Unaltrofestival, Milan/ 9th, Vicolo Bolognetti, Bologna/10th Spilla Festival, Ancona) That’ll be my first time over, I’m thrilled we managed to get some shows, it’ll will be one of the highlights of the year no doubt! I’d Love to see you down at one if you could make it?
Thank you very much for getting in touch with us and hopefully see you soon.