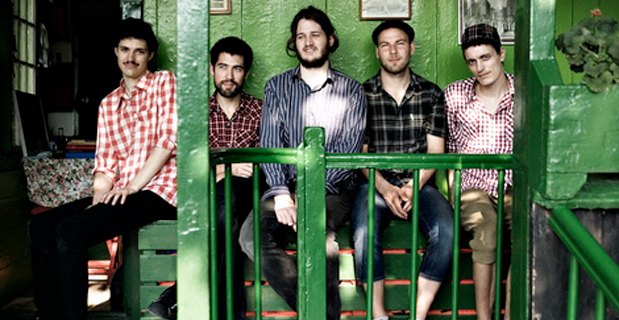 On the occasion of "Magic Chairs" release, we asked guitarist Rasmus Stolberg to overview Efterklang's artistic path and the persisting changes showed in the albums amd Ep's they released  and its never stopping. From "Tripper"' "nordic electronica" and "Parades" orchestral implant to the recent and peculiar pop nature, let's try to understand the unstoppable transformations of the Danish band, both live and in studio.

How did the core of the band initially get together? What are the artistic backgrounds of its founding members?

We got together when we were quite young. We didn´t have any artistic background. Efterklang is our only and first project.

The number of musicians gradually increased from the beginning, particularly in "Parades" and in your live formation. Is there any substantial difference between the way you play in the studio and the one you play live?

On our latest album "Magic Chairs" we have tried to combine the way we play live, with the way we were making the record. When we did "Tripper" and "Parades" the studio setup and live setup felt like two very different things. Usually in the studio we can experiment a lot more with making music and on stage we can enjoy just playing and being part of the whole thing

Still about live performance, you are often supported by the Broderick siblings: how did you get in touch with them? How did their multi-instrumentalist skills contribute to the sound of the band?

They are perfect to have in our band. They both play many different instruments and they understand our music perfectly. Their contribution is very important. We found Peter on Myspace many years ago or he found us actually and then through him we met his sister Heather.

Your first album "Tripper" was kind of close to the dreamy electronic formula of some other Northern European bands. Then clicks, bleeps and buzzes got replaced by orchestral insets: strings, winds, percussions... How did this change develop, and why? Was it a deliberate choice, or did it all begin with an unexpected occasion to enlarge you sonic palette, promptly seized and put to good use?

We always try to renew our expression. But it happens quite organic. We make an album and then we learn something and get new inspirations and then this forms into what the next album is about. "Magic Chairs" is highly inspired by the many concerts we played after the release of "Parades" in 2007.

And your conception of music, or let's say the "sense" of the band... Has it transformed in parallel, or is it basically the same as it ever was?

It changes as well. In the early days we were trying hard to define what Efterklang and what it wasn´t. Today we have learned that almost no matter what we try or do it will always come out as Efterklang, because of our close relationship and understanding of the band.

Besides the changes in the instrumentation, your artistic path seems to reflect a remarkable mutation in the mood of your music. At first it was more explicitly coy, and pensive; now it's very colorful and extroverted. Specially in your concerts! Was it a precise artistic choice, or the byproduct of a subtle change in your attitude?

Our attitude has always been positive - we in general happy people,  but I think we found out a way to make positive concerts and albums without them being cheesy or shallow. At least this is what we are trying to do. Before we would avoind anything that was light or poppy, because we felt that was not what Efterklang was about. Now we are more relaxed and enjoy using these elements as well

You're not the only contemporary band having undergone a transformation of this sort: from more restrained and minor-key music towards a more luminous and collective dimension. Do you feel that this change mimics some change in your personal everyday life, or in the way people relate to music nowadays?

I feel it relate to how we in Efterklang feel about music nowadays. We never analyze ourselves that much. We get inspired and try to follow these inspirations and we enjoy investigating music.

Your new songs still feature subtle references to Northern European folklore, but also some Mittel-European elegance and mood. Is any specific musical tradition particularly important for you? If it is the case, is your interest just a matter of style, or more of a link with some ampler cultural context?

It is always about our intuition and that we like music. All sorts of music. We never intellectualise our or other music. We enjoy it - we dive into it. Like kids. And we use our taste and energy to make it into our music.

Are you able to detect any traces of Denmark in your music? Not only speaking about Danish musical heritage, but also about Danish landscapes, climate, way of life...

Not really. Denmark is flat like a pancake and I feel our music has a richer landscape J

What are the most important emotions for you, or the ones you try to portrait with your music?

We just feel music, we never portrait feelings. Or I mean we do of course, but we are not aware of this. We don´t talk about music like this.

The sonic richness of the many tiles of "Parades" (akin to the ones in the cover) found its perfect completion in the performance with the Danish National Chamber Orchestra. How did you manage, as an independent music band, to get in touch with such an official institution? Do you think that the orchestral dimension is now the most fitting for your music?

We were so lucky! We had talked about doing something like this but then we dropped the idea, when we started investigating how expensive it would be. Then six months later they contacted us!! They wanted to play with us. This way we got to be part of their yearly program (and budgets) and this made it possible. We felt very very lucky at that time.

I think the collaboration was perfect for Parades. For our new album I think maybe it would not be the perfect collaboration. Maybe we should try to perform Magic Chairs with a big band and string quartet this time.

You're also active in the discovery and promotion of new artists, as the activity of Rumraket demonstrates. In the meantime you published for the Leaf label and now your "Magic Chair" is coming out for the renown 4AD. What have your experiences been with these labels? What's the overall idea you got of the contemporary musical market?

We have our own label and have worked with fine independent labels. We are happy to see that good labels exists. We hope that they can continue to exist. They are important filters and they can be very helpful towards bands. We have never felt cheated - that's for sure.

Many of your songs show an impressive descriptive/"cinematographic" potential: even when melodically and rhythmically driving, they can evoke very strong images. How do you conceive the relation within music and images? Have you ever thought of associating your music with some sort of soundtrack? For what kind of images, if so?

We have made soundtracks for a few films and theatre. It was very interesting!! We would love to do more of that. And it would also be great to see our music together with beautiful / interesting films! Maybe Lars Von Trier could be convinced. We would love to score his films.

At the times of your first musical outputs, someone associated you with generic notion of "post-rock". With the passing of time it became evident that you were developing a strikingly personal style, which showed a progressive conjunction to pop. What do you think of the "post-rock" concept? How would you define your music, now?

I like the original idea of the term post-rock and also the term indie. But these two terms evoke so strong pictures in peoples mind. If you say post-rock then everybody think of ten minute long songs that are quiet and loud quiet and loud and so on. Therefore I try to avoid Efterklang being categorised like this because this thing has never been what Efterklang does.

In the past few years we have used the term post-pop. We havnt seen other use this term, so maybe we invented it J We have no idea of what it is exactly though. And this is how it should be.

We also describe it sometimes as "orchestrated experimental pop music"... 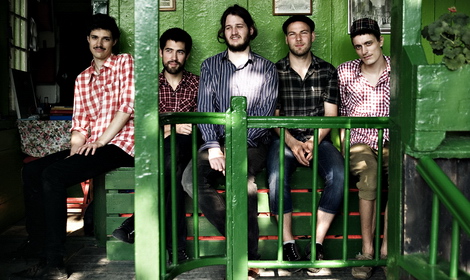 Leaves - The Colour Of Falling