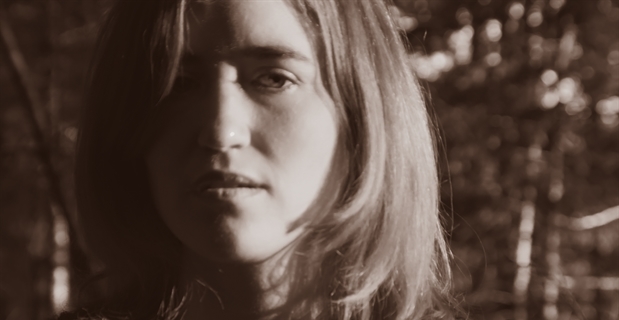 Sounds from the holy mountain

Before going to your current production, I’d like to go back to your first days as a songwriter. What was the first song you ever wrote and why did you write it? Did you have in mind to write it to be a songwriter?
The first song I ever wrote was an accapella lullaby when I was probably around 12 years old. I still recall the melody and most of the lyrics.  It’s about flying through the clouds, to the stars, and far away from the world.I think I wrote it as a response to the emotions of being that age.  I didn’t have it mind to be a songwriter at that time, or a singer for that matter. Instead, I remember being very focused on becoming a drummer. It wasn’t until I started learning the guitar a couple years later that I considered being a songwriter.

There are a lot of artists labelling themselves as folk, but very few who can claim to put traditional folk songwriting –rather than straightforward pop –up front in their music. Do you feel like one of them and is it ok for you to fall into “traditional”folk?
I wouldn’t want my songs to be considered “traditional folk” because I wouldn’t want my writing process to feel limited to those songwriting structures. However I definitely do use musical and lyrical ideas from those traditions and let the songs develop from there. I prefer only to stay in the traditional structure if it feels necessary for the emotion of the song. I do love the character of traditional folk music but I also love to explore outside of it as well.

Your career reflects, though, a very clear growth in your songwriting and in your artistic expression as a whole. “Bury Me Into The Mtn”sounds like your most intimate and involved record –being even kind of  “unsettled”in some moments. Do you see yourself in this evolution? Is the title connected to a personal feeling?
I approached the songwriting for "Bury Me Into the Mtn" with the intention to take myself out of the songs, actually. The songs still reflect my experiences and emotions, but less literally. I wanted them to feel like another person wrote them. This does feel like my most involved record for that reason, in that I spent the most time writing and re-writing the songs. And I feel that unsettledness is influenced by the intimacy and sparseness of the instrumentation.  Also recording in an empty church definitely had an effect.

If your previous records could be played alone, on an acoustic guitar, with no problem, it seems harder to me to do that for this latest one –it sounds much more collective and I feel the arrangements are always there for a reason, not just to add something to the songs. Do you agree?
I actually feel the opposite! My previous record, “Oh Thunder” was full with other musicians and it really influenced how I toured and performed with it. I felt I could only perform a few of those songs solo and the rest I needed a backing band to pull the song off. For “Bury Me Into the Mtn,” I wrote and arranged the songs with the intention that they could stand on their own solo with just a guitar. That way when I toured with it solo, I could have more songs to pick and choose for my setlist.

In this record you are associated with Phil Elvrum and his musicians. Is this a new collaboration? Did they contribute to the “haunting”atmosphere you sometimes feel in “Bury Me Into The Mtn”?
It was a new and exciting collaboration to work with Phil Elverum, Paul Benson, and Allyson Foster on this record.  Phil drums on the song “Great Carving”, while Paul sings the harmonies. Also both Paul and Allyson sing on “Fourteen” and “Aurora.”  The rest of the instrumentation I played myself. I had a lot of fun writing and playing the other guitar parts, which I feel contribute to the haunting effect. The windstorm definitely played a part in that as well.

The entire album was recorded inside a renovated church, you can hear the windstorm at the beginning and during some of the tracks…Was it a deliberate choice or just an opportunity that came by?
Both! In some songs, like “Louise”, the wind played a beautiful part as we were recording live and we were thrilled to keep those tracks as they were. We also decided to record the wind by itself and to then later add to a track as well, like in the beginning of “Aurora”.  That windstorm definitely influenced and contributed to this album a lot.

Is this a direction –using more suggestive elements in your music –you want to impress in your music? Maybe taking something from your post-rock side project AANTARCTICA…
Aantarcticaa definitely encourages me to explore outside the box, which I appreciate very much.  So yes, I think the more different routes to approach a song or album, the better!

In “Bury Me Into The Mtn”there’s a track about Ursula K LeGuin’s translation of the Tao Te Ching. Is this a casual reference to Eastern religion or philosophy, or are you more deeply connected to it? How?
When I was attending college at Evergreen, I spent some of my studies reading and comparing different translations of the Tao Te Ching.  Ursula K LeGuin’s translation was by far my favorite.  The poetry she brought into it breathed a new life into the wisdom of the text that I very much appreciated.  That’s as far as my studies go, though I definitely have had that book on hand at different times of my life to help center myself.

Can you speak a little about your future plans? A label deal? An European tour, maybe?
I’ve started making electronic music in a new project called Cavegreen.  We have just finished our first EP and music video, which will be released Monday, March 30th.  I’m very excited to explore this direction - it’s been such a delight to make music I can dance to!  You can listen at our new website, www.cavegreen.us .

Can you tell us a bit more about his project? What inspired this electronic turning point and this work in particular?
Cavegreen was inspired by the desire to return to a simple yet sincere appreciation for nature.  We live in a time now where everything appears so explained, and it’s easy to overlook the mysterious nature of existence. This project is our way to explore and praise the mysteries, complexities, and beauty of the world; to remind ourselves of our personal relationship with nature and to reimagine our place in the larger scheme of things.

As far as the music, it started as a collaboration where I composed Gianluca’s poetry into songs on the guitar. But then one day, Gianluca suggested I learn how to make some electronic beats and now here we are!

Will this sound "setting" influence your solo career as well, and how?
I’m not sure yet. I think it might influence my solo career in that my attention may be more focused on Cavegreen compositions for the time being. Though I do think it would be fun to re-mix old songs of mine with some beats at some point.

Bury Me Into The Mtn