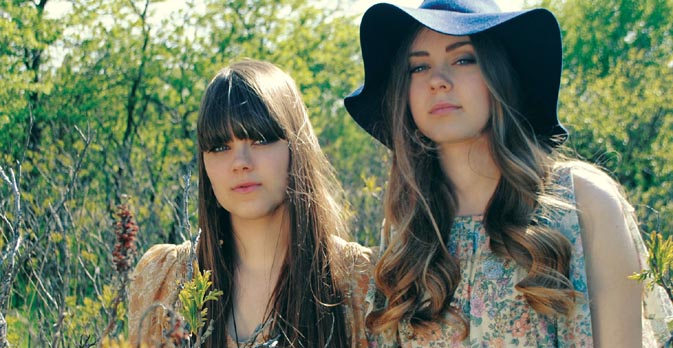 interview by Righetto, Cortassa, Bartolotta
Tweet
We met Klara and Johanna Söderberg during a promotional day with several Italian media. The huge amount of interviews could have make the two sisters bored, instead they were always very glad to give detailed answers to all the questions.

The music of the great songwriters of the 60s and the 70s reverbs throughout all your music. You even cite a few of them in "Emmylou". How often do you find yourself listening to a record and thinking: "I want to write a Bob Dylan song", or a Neil Young song? Is this the case of some of "The Lion's Roar"'s tracks?
J: Yes, we do that all the time, almost all song are like that
K: Definitely! You know, you listen to something and you're like "God this is so good I wish I could write a song like this" or I think "If I were Joni Mitchell, which kind of song I would write now?" and then I start playing.
J: That ends up like the first take of the song
K: Yes, then it sounds like our own song, I just tried like being someone else and it didn't work, so I just sound like myself. But that's a good observation.

That was a time when songs could shape history, they could orient people's minds, or at least this is what we think now. I read frequently of your mother speaking to you about feminism and I was wondering if writing that kind of songs was one of your aims. Do you think it’s still possible to write such songs, nowadays?
J: Mmmhh... I don't know...
K: People listen to music differently now... In the 60's and 70's it was all about record labels picking like “these are the people that we believe in”, and they were the big stars. Now it's more like everybody sort of has an audience, if you make music you can have fans, but it's not alike...
J: Perhaps there can be one song that I hear everyone listens to that can change the world but it hasn't happened for a while so...
K: No, no...
J: But I do think that music can change people, can inspire the good in people. That's what we try to do, the opportunity to use, when we feel sad or angry, use the music in a positive way, so that we can inspire other people to do that too; like in “You're Not Coming Home Tonight”, which is one of the first songs that we wrote, it's about a housewife leaving the husband... I think it has a sort of feminist story.
K: We hope all the housewives could hear that song! [laughs]
J: Yeah! Our mother's influences of a feminist perspective comes out from all of our songs, and I think we want to be a role model for young girls, and girls in general, you know...
K: People in general! I think for me the kind of music I listen to inspires me to be a better person, it makes me feel better, it's sort of a relief when I feel sad, I don't take it out on anyone, I just listen to music and it makes me feel less lonely and therefore, you know, happy in a way.

[Guia]I think that, anyway, this feminist upbringing perspires, maybe unconsciously, from your songs. I mean, you two are very young girls, with a delicate and sensitive appearance, like singing fairies, but then your lyrics go like “I'm a goddamn coward, and so are you”, which one wouldn't expect, just looking at you.
J: That's very important for us, we don't have that kind of an image. We don't want to sound for how we look, we always try to avoid those kind of things. We want to make our music real and important, singing about real life situations. Because all other music, you know, it just don't feel like it's honest about nothing that matters, I mean, that music can be good too, it's amusing, entertaining, but we want actually make music that moves people.

Aren’t you afraid of falling victim of this “Retromania” going on?
J: We already are! [laughs] We've been fascinating by all that thing by...
K: I don't know if it is a bad thing because, you know, to me, there is so much great great music, there is nothing bad about listening to all this amazing music, just this having to be new all the time, I think it's a strange thing that we sort of have, also with the internet, you grow bored of a song that you're listening and you go on on a new thing, for me is just like going back and it's sort of nice.

You will attend again the End Of The Road festival this year – and us with you, on the other side, for the fourth time in a row. It’s like Woodstock, but in a softened, comfortable way. What is your position? Is all of this, this folk music revival, a vintage memorabilia, completely spoiled of its social meaning, or do you think there is still some “greater reason” for people to attend festivals, to listen to some kind of music? It’s probably more liberating than depressing to think that now it’s music that counts, in the end…
J: Yes, festivals are something more than just music. They do that in England a lot, I think it's great, people there have not just a musical interest but more cultural in general, there's writers, comedians... End of the Road is like a family festival, too, it's very chilled out, relaxed. It's fun, it's like a big party for us, working on the same genre we get to hang out with many people we know.

Your first festival appearance ever has been as SXSW though, quite the opposite in size and hype to EoTR. How did you feel debuting in such a big occasion? How do you feel playing at Coachella in April?
K: SXSW was our first in America, but probably our twentieth ever, we had been playing festivals in Sweden, Denmark and in the UK before.
J: Coachella is legendary, we really look forward to it; and it's two weekends now so we are going to be there twice, it's cool. It's gonna be fun, if we miss someone we can just see them the next weekend!

Your story reminds me a bit of another Swedish artist, The Tallest Man On Earth. He came to the US more or less unknown, and in a very short time he was opening for Bon Iver. Do you know him? What is your relation with the scene of your country?
K: It's very inspiring, we think he's great... J: One of the few artists in Sweden doing similar music to us, so it's really inspiring to see him doing so well; it's very similar to help people describe him, because he's very american in his sound, so are we, we to get the same kind of reactions, it's cool. Swedish music is not our biggest theme, you know, Abba, there's a strong pop tradition...

[Stefano] My favorite band at the moment is a Swedish band, I think you know them, Kent...
J+K: YEAH!! [they sing a little from "Parlor"]
J: It must be interesting for you because you don't know what they sing about! You know, there is also Demien (???), he's in Swedish too, and it went big in America, that is fascinating because he sings in Swedish.
K: He's very 70's and psychedelic J: Yes he's really into all the swedish psychedelic 70's music.

And what about indie-pop, like, I'm From Barcelona, for example?
K: Yeah, we like that too, for sure.
J: Yes, I just see that maybe it's all something that it's very connected to our music.
K: NO!! But I think that it's all sort of been inspiring to grow up and know that all these Swedish bands are big internationally; it sort of made us feel that maybe we could do that too.
J: Yeah, you know, it's such a small country and everybody kind of knows each other and supports each other, so when we started some other musicians came to us, they were very supportive, like a great recording family, it's really great.

[Stefano] That's interesting because, you know, I can't properly tell because I'm not an artist, but I feel that here in Italy people belonging to the same big underground scene most of times pretend to be friends just to show off, not in a sincere way; while you in Sweden seem really connected.
J: I do think so, it's not just a show off, and it's not like a competition for us, if one succedes in being a great artist that means there can be ten more; if he's big doesn't mean we can't; we all help each other. It's a good environment to be for a musician.

We spoke of your '60s and 70's influences, but what's inspiring you of today's music?
K: Well, Fleet Foxes obviously, Johanna Newsom... we listen a lot to Dylan LeBlanc, he's great, he has a new record out this year. He has an amazing voice and when we saw him live for the first time we realized that, because it doesn't come through all the time, when he played the [End of the Road] festival we sang together, we were just rehearsing, and it was really moving just singing together the three of us. He's really amazing, a great voice.
J: Yeah, it gave us goosebumps I don't usually get that when I'm singing myself, but just his voice was so “Aahh”, amazing. There's also things from the UK and its folk scene, like Laura Marling, Emmy The Great .

How will you present yourself on stage, for “The Lion’s Roar” tour?
J: Well, just the two of us and a drummer, that's it. We just try to keep it very simple, because we think that when we have a big band sometimes it just overpowers our voices and what we are about, which is just being simple with our songs, and I think it works, we don't need a big band. For us is very important to have a connection with the audience, to be able to look at it in the eye, it feels real. We are not really afraid, we don't have stage fright, so.
Discografia 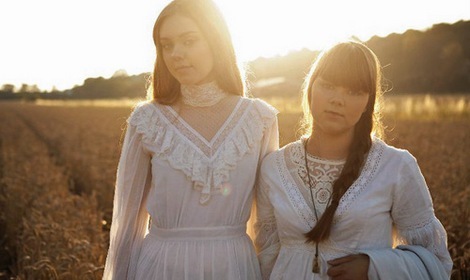 The Big Black And The Blue