interview by Lorenzo Righetto
Tweet
Let's finish off the "Bon Iver question" right away. The story of the recording of "Anywhere But Where I Am" coincides somehow with the creation of "For Emma": the fact that you were in an abandoned office in Wisconsin, without heating, first of all. Do you think that this kind of side information is important to "understand" what is behind the music? What brings people to create myths (like in the case of Bon Iver's case), in your opinion? Have you already experienced it in your blooming career?
I do think it's important for people to understand where you're coming from when you're making something that's not so traditional. Well, maybe not "important" but it adds. It adds to the experience that we want all listeners to have - to put them in a place. We want the album to serve as a vehicle to the wintry, rolling hills of Wisconsin. It has nothing to do with Bon Iver, as an artist, but more as a person. I'm sure he grew up shoveling the snow on the coldest winter nights just as we did. Where everything appears to be glass.

You then finished the record in your Nashville studio. Did you work on "raw songs" - like guitar and voice - or you had at least in your mind, already, how the arrangements would be like? In the end classical "folk" arrangements are quite rare in "Anywhere But Where I Am"...
Every one of our songs started out with a guitar or piano part. I would say close to all were written in a "raw" song format, with guitar and vocals. Where I think we differ from traditional folk is that if you think of this "raw" song format as a skeleton of a song, then Eric and I collectively break every bone before we're done with the song. Grotesque, maybe, but it fits how nearly ever song we write goes through quite a change throughout the course of recording.

The music of "Anywhere But Where I Am" changes a lot from track to track, but you seem to draw, in particular, from ambient music and cinematic music in general, like post-rock, other than folk and roots. Is this a reflection of the combination of both of you, one  - Brian - being the songwriter and the other - Eric, who has studied Film Scoring - being the arranger?
You know, one of the only reasons why we call this album a "folk" album is because that's where our intentions were initially. Both Eric and I like creating soundscapes, him more of the technician of that than I. I'm not sure if I would consider myself the "songwriter", as a lot of the album was written collectively.
As a side note, this is one of the hardest things for me to do - get in a place with someone else and write something together, but we both know we write some of our best songs when we're both fully involved. We compliment each other and play off of each other's strengths and weaknesses all over "Anywhere".

Also, your lyrical style seem to change a lot throughout the record, from the sad tale of "Where The Willow Died" to the impressionistic "From The Lake To The Land" and to more confessional tracks like "Fake Arms". How would you explain that? Is there a unique songwriter in the band, or you both write the songs?
We both write the songs. You know, I don't think lyrics are something Eric and I think about much before the song is written. A lot of thought goes into the lyrics when we're in the process of writing, but lyrics are always subject to the music. Our thoughts come out more in the music.
What pulls me personally to music is finding the idea, the emotion in music itself. One of the most powerful pieces I've listened to is "Light Through The Veins" (you can hear this starting Coldplay's "Life in Technicolor"). It speaks to me more than our words can. 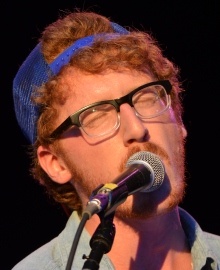 What would you indicate as a main feeling for the record? You have chosen a very existential title, implying a never ending unsatisfaction, a wanting for a displacement in space, but maybe also in time…
That's it. The title says it all for how we started the album, and finished the album. It brought us to Nashville, TN. Eric and I both have a feeling that creeps up, that we're not where we should be. It's the pursuit of happiness, to a fault. For me personally though, bringing this up, and being aware of it for a full year has brought some closure to that feeling. It's nice to be content with where you are.

What I really like about your music is the longing it emanates. Take these lines, for instance: "How am I?/Taller?", which sound to me a kind of confrontation between himself and the world. Was this sprung from some specific events or is it a general reflection on human condition?
I wrote "Taller" right after moving to Nashville. It's about my personal journey going from Wisconsin to Chicago, to Nashville, back to Chicago, back to Nashville. Each move felt like it was something I should be doing, that it felt right and final. That I was happier leaving something behind.
But I realized after moving back to Nashville that it was a temporary joy, of being somewhere new and feeling like you were starting fresh. That you might be happier now than before. "Taller" is about the realization of trying to manufacture growth for yourself. You can't just move somewhere and expect to feel more fulfilled. That happens on a daily level. I've realized that the scale for happiness is very, very small.

Have you ever asked yourself the question if "folk music" should speak about people's material problems? Do you still consider what you do as "folk", in general?
I haven't ever thought about that, no. Maybe I need to do some research on the history of folk. You know, that's something we're dealing with (if we consider ourselves folk). I would say "no" in the traditional sense. I'm not sure where artists who we align ourselves with - Patrick Watson, Bon Iver, King Creosote, and then Bjork and Steve Reich fit.

From your record one can clearly feel you are attentive scholars of contemporary music. Do you also find a tendency in other US bands to mix folk, intimate music with cinematic music, as a way to expand one's feelings? Do you think this is an adaptation to American roots music of what other bands have done in the past, Sigur Ros above all?
Yeah, I think so. I'm not sure about US bands, but just bands in general. There's always something new to explore within music. We just happen to like exploring wide, boundless spaces.

I have seen you playing at SXSW with other bandmates. What is the live setup of Foreign Fields?
Glad you asked! We're playing with some of the best musicians who've been around. Nathan Reich plays guitar and sings. Nate Babbs is our live drummer from Minneapolis, and our newest addition is Clayton Fike who will be on bass, synth, and vocals.

SXSW has also marked the endorsement of Adam Duritz (Counting Crows) for your music, and he also chose you to support his band in its current tour. Can you tell us how it happened and how the whole thing developed?
Adam, and Counting Crows, have been amazing to us. Adam specifically has helped us out in more ways than I can explain (down to "Adam, we don't know what to do with this album... but we want it back up, what do you think?").
To be touring with them is a real honor. They've done it, they've been at it successfully for twenty years - an accomplishment that we can only strive for. He found our music through Sean Moeller at Daytrotter. He really liked what we had to say with our music and we've been talking ever since!

You started as a self-released, Bandcamp digital project. Only now you are releasing physical copies of "Anywhere But Where I Am". Are you willing to go on without a label?
We like where we are right now. People are discovering our music everyday and it feels great to be able to make decisions and move on them as we please. That said, we're receiving offers and will align ourselves with anyone who believes in us.

What are your current plans now? Will you come to Europe?
We're tour prepping right now for the Counting Crows tour in a couple weeks. After that, we're hoping to get back into some of the same markets we're hitting on this tour. Hopefully we'll be out to Europe soon!
Discografia

Anywhere But Where I Am