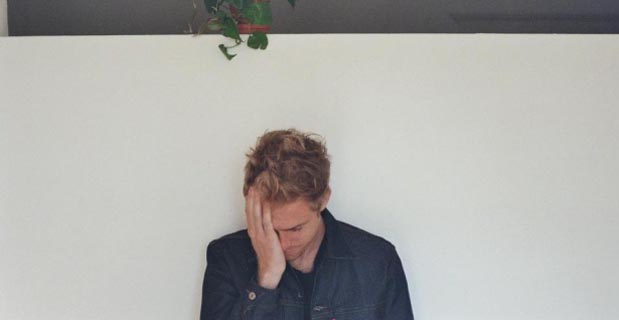 interview by Vassilios Karagiannis
Tweet
Fred Wood's "Documenta", an emotional and thoughtful collection of songs critics and audience are not much aware about yet, is one of this year's most interesting songwriting releases, putting its author among the best talents coming out in 2013. We long interviewed him per email to discover a promising musician's past, present and - why not? - future.

Let's start from the beginning of your music journey. When did you realize you wanted to become a musician?
I guess I've always wanted to be a musician…as far back as I can remember. The first time I was left alone with a guitar was definitely a big thing in my life. For me, writing a song is one of the most satisfying things. Why not try to do that my full time job?

You were formerly known as the singer of a band named Château. What do you remember of those times? Did that experience help you somehow in finding later your own sound?
It was a really good time. I mean, we had no real ambition or anything. We were just making music for fun in my parents' basement. It was also the first time I was including vocals in my own music. I started singing pretty late,  when I was 18 or 19 years old, so it was the beginning of trying to find my own singing voice, which is a really hard thing to do. I've spent many nights singing and recording down there. I wrote so many songs during that period: two of them are on the record actually.

What's the reason behind your stage name? Judging by the “surname”, it seems it was inspired by the vastness of the Canadian wilderness.
Haha, it would have been nice, isn't it? But it's actually much more simple than that. Both of my parents have the word ''bois'' ,which means Wood in French, in their last name. I was kind of desperate to find a name and I thought: "why not take that word, translate it and add an “s” because they're two?"

Let's talk about your album. It features a lot of collaborations with other musicians, including a brass band. Could you please tell us something about the recording and the production of “Documenta”?
Well, the whole recording and production process was very much a collaborative one. My band consists of Francois Zaidan and Alexis AM, who are two of my best friends. They helped me a lot with the whole thing, especially with the arrangements. My initial idea was to record everything on my own in my apartment. Surprise, it didn't turn out as expected! It was just really bad. So I called Alexis, who was the drummer in Château and also happens to have a really nice studio set up in his apartment, and I asked him if I could record some songs at his studio for like 3 or 4 days. Those 3 or 4 days slowly became a year! I realized I wasn't gonna be able to make a record on my own because I'm probably too lazy and because I want to play with better musicians than myself. Most of the album was recorded at his studio except for some overdubs which were recorded at my apartment.

While being mostly acoustic-guitar driven, your songs have a really definite and recognizable sound, thanks to the employment of keyboards and a wider instrumentation, as aforementioned. In some ways, they are approachable to the current American indie-folk scene. However, do you consider yourself being a folk artist?
I don't mind being called folk or indie folk or whatever. I just don't think it's my job to label myself anyway. I like to write songs with a guitar in my hands: it just feels right that way. I like the physiciality of it. Maybe I'll get bored of that method someday but for now this is how I operate. I've decided to include electronic sounds because that's what I do on the side. I make sounds. I love it. It's a good distraction for when I'm not in the mood to write songs. I tweak stuff. I also think synths and acoustic guitar go so well together.

What musicians and/or bands influenced you and your music? Are there some records you may call essential for the definition of your sound?
A lot of artists inspired me on many different levels. For example, Pj Harvey. I love her last two records, the way they sound: they're so raw and honest. It's something I've tried to do with “Documenta”. Bonnie Prince Billy, Thom Yorke and Robert Wyatt are my favourite singers. I listen to a lot of electronic music as well, techno basically. I'm also inspired by movies. I'm a big fan of Dogma 95 movies. It definitely inspired the mood of the songs.

Is there any particular meaning behind the title “Documenta”?
I was just trying to find a way to say it's a collection of songs that belong to a certain period of time. Like: “Here's what I've done the past few years. Here's “Documenta”. You know?

What inspired the lyrics? Is there any specific concept that unites them?
It all comes from a stream of consciousness writing process. I write pages and pages, but I use eventually maybe 10% of it. I'm pretty economical in terms of lyrics. You don't need much to make a song. There's no concept that unites them but I would say that a recurrent theme in my songs is identity; you know, trying to find your place and trying to find who you really are. Are we playing a role all the time? If not, when are we our true self? So, honesty basically.

Is this melancholic, low-key mood that marks your record occasional, or is it instead your typical approach to songwriting?
It's just the way I sing I suppose. Even when the lyrics are pretty or uplifting, it sounds kind of melancholic and sad! I've tried to make more upbeat and happy sounding songs but they always sound bad, hehe. I guess I'll have to try harder!

You decided to release your music completely by yourself, without the support of a label. Do you think that platforms like Bandcamp will represent the future of music?
Well, I wanted to release my record out there as quick as possible because it felt right this way. Bandcamp is such a good platform and I wasn't gonna wait for a label to sign me to release it. But I still think there's a place for the physical thing. I didn't do it for the sake of being independent. I would like to have a team of people helping me in the future, but for now I have to make everything by myself, which is great as well.

You live in Montréal, a city that witnessed in the last years an incredible artistic and musical boom. What's your opinion about the current Montréal scene?
It's obviously a positive thing for the Montréal music scene to be under the radar like that. There's a lot of good music coming out of it, just like any other city in the world. And the scene you know: it's not a tangible thing. it's pretty abstract. As far as I'm concerned, Montréal is just where I live honestly, and I'm only living here for practical reasons. I wouldn't say “Documenta” was influenced by the city so much.

What are you currently listening to? An artist you think is worth checking out?
Most of what I'm listening at the moment is electronic music. Stuff like Terrence Dixon, Huerco S., Hieroglyphic Being, Actress is really inspiring. The new Nick Cave is also very good. You should check out my friends from Montréal: Technical Kidman. They're a really powerful band.

Last question: any plans for the future?
I'm going to Europe this spring to play a couple of shows in Paris and Berlin. Write more songs. Play gigs as much as possible. Record a new album eventually!

Fred, thank you for the interview.
You're very welcome and thanks to you!
Discografia