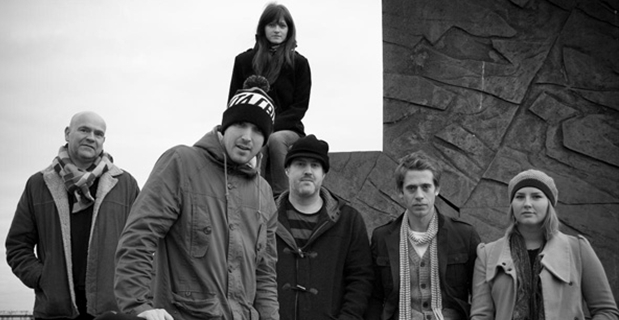 Toy boats on the banks of Albion

interview by Lorenzo Righetto
Tweet
Looking at your band pictures, it struck me there is a certain age difference between the members of the band. Can I ask you how the band got along and so on?
When Joe and I wrote the advertisement for band members we wanted to find people who liked the music we were trying to make rather than looking for a specific type of person. We advertised for any age any instrument to see what happened. Lots of bands seem to put “aged between 21 – 30” etc. which I guess is part of some kind of marketable image thing, but we figured that was all nonsense and it’s all about being part of a group who like playing songs together. It’s worked out really well in terms of the band dynamic. Phil is the oldest member of the band but it’s normally Joe who needs an afternoon sleep.

Coming from Brighton and playing chamber-folk-pop, I cannot help but ask you what your relationship with the local scene is.
There are loads of great bands in Brighton and it’s difficult to keep track of the comings and goings.  We’ve made friends who we hook up with for gigs but there’s always something new going on.  I guess The Brunswick in Hove is the place we play most. Amy Hill puts on an awesome free night there and that’s a pretty good starting point for folkish sounds in Brighton.

What would you indicate as your trademark, with this number of bands playing similar music?Probably having two lead vocalists.

In the relatively short time span of less than a year, you have released two albums and an Ep. Are these songs coming from the same “inspiration period” or were they composed in this last year?
A couple of the songs were finished a few weeks before we went away to record and a couple are almost ten years old and have been reinvented from different bands I’ve been in. Most are from the period between the last album and this one. I’m not very good at finishing writing songs so we’ve always got lots of bits and pieces to play around with in rehearsals and things tend to take shape gradually.
Inspiration wise the main themes that are different from last time are songs about animals and conflict (not both at the same time). Some of our “older listeners” said that they feel modern music isn’t very political.  I kind of agree, the Nu folk scene isn’t very political. I think most of the good politically or socially related music in recent years has been written by Hip Hop, metal or Grime artists. I tried to write a few songs that were more politically orientated, but I’m not very good at it. Whale Song is about people suggesting you should write songs about things.

For your second album, “Cloud Physics”, you started a crowdfunding campaign. Why? How did it go? Did you receive any “special subscription” to play on Skype or in some far away pub?
We really wanted to record the new album to a good standard but we were all fairly skint.  We had a bit of money put aside from the last album and gigs, but with six of us in the band most of the money we make just ends up getting sucked up in transport, equipment, accommodation and interesting sandwiches.  We looked at Pledge and saw you could have fun with people who liked your music and make some money to make some more music. Some of the many highlights were some brilliant people who came along to one of our rehearsals which turned into a mini wine fuelled gig, a lovely man called Alan in America who pledged for us to write a song for his wife, we also wrote a song for someone’s daughter, someone’s dog and had someone starring as the moon in a video we made for our first album.
Basically it was great.

Two records in a short time, still some differences start to emerge. Would you point some out for us, in terms of mood, arrangements, composition, etcetera?
We wanted the new album to sound a bit different to the first but didn’t want to sit down and work out how to make it different if that makes sense.  I think because we’d all been playing together for a while, everyone felt a bit more confident in coming up with ideas and we threw them together.  It’s definitely rockier and we spent more time thinking about arrangements.
Some folks felt that on our last album everyone was playing all the time so we tried to put more space into the songs. I love Pixies and Nirvana who I think show how important it is to have dynamics in your songs.  We also gave Viktorija a cheap Casio keyboard to play with which gave us a whole load of random new sounds to experiment with. We were lucky enough to be able to get some friends to add extra vocals and some viola and cello which gave some of the songs an extra dimension we couldn’t add in the first album.

You have been compared to a lot of different bands, without really catching the unique spirit of your songs, which I find very personal but also very much rooted in the British folk tradition. Would you indicate a point of reference for you and your music?                                                             I love British folk, but not so much the very traditional renditions. British modernish folk artists like Fairport Convention, Rachel Unthank and the Winterset, Trembling Bells, Richard Dawson and The Imagined Village do an amazing job of taking traditional songs and styles forward and adding something new. I think if you don’t do that then it becomes a historical exercise in who knows what.
Among my favourite non folky bands are Nirvana, Pixies, Joy Division, At the Drive In and Belle and Sebastian. Joe loves the blues, Bob Dylan and Dire Straits, Phil loves Jackson Brown and prog rock, Beth loves First Aid Kit and The Cranberries, Viktorija is into some random Latvian folk, Bach and Euro techno. Josh likes Dave Grohl’s drumming and because he’s 20 lots of bands we haven’t heard of. I guess all of that must get wedged into our songs somehow!

In your bio you claim you have recorded in a dungeon. Can you tell us more about that?
The dungeon is almost too terrifying to talk about. We made Phil and Paul (our first drummer) record bass and drums down there to get some separation from the acoustic instruments but I’m not sure they’ve ever fully recovered!

What intrigues me of your songs and of chamber-folk-pop songs in general, is the composition and arrangement process. Can you tell us about how songs develop, from Ben’s idea to the final product?
I generally write songs by playing guitar and then wailing over the top until I find a vocal melody that I like. Normally at this point there are no coherent lyrics to the song mainly just noises but sometimes the lyrics come first.  Then I’ll take this to rehearsal and we start putting it together. When we started the band we always felt we should be able to play the songs even if there were only a few of us because it’s not always possible to get everyone together for a gig.

Will The Galleons remain mostly a studio project, or is there space for touring?                               We would love to do more touring. We haven’t done a huge amount in the way of gigs outside of Brighton for about 6 months because we’ve been working on "Cloud Physics" but now it’s done we want to go out and play in as many places as possible.  Because we all have to work and there are six of us it can be difficult to organize a tour.
Last summer we had a great time playing festivals and gigs around the country and we really want to do the same the same thing this year. It’s really really great that people outside of the UK have been supportive of us as well so if anyone in the rest of Europe and further afield has any suggestions for where we should go please get in touch!  Or just get in touch anyway to say hi!
Discografia