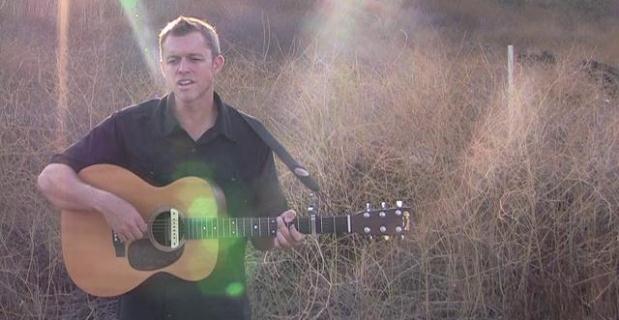 The warm waves of the soul

interview by Lorenzo Righetto e Gabriele Benzing
Tweet
Let’s start from the beginnings of your music path: when and how did you realize you wanted to be a musician?
Kyle Kersten: I’ve always really enjoying listening to music and playing music.  It wasn’t until 2005 or so when I realized I could write songs that people enjoyed. It’s been a fun journey.

Greater Pacific came out from a previous experience, that goes by the name of “Travel by Sea”. Can you tell us something about that band and how it relates to the current one?
K: I started Travel by Sea in early 2006 with a friend of mine named Brian Kraft.  We made our first album without ever meeting in person.  Everything was done via email/instant message.  After we finished our second Lp we were lucky enough to have John Phinney and Mike Cusick join the band, both John and Mike are in Greater Pacific.
John, Mike and I decided in early 2010 to record some songs under the name Greater Pacific.   We weren’t sure what would come of it but it’s now my main project and something that has been a lot of fun for us.

You have chosen, as some of your labelmates did, to name yourself from a specific place, the “Greater Pacific”. Is it a personal choice, or a way to express also visually the poetics – or, simply, the mood - of your music?
K: Honestly I just came up with the name one day and liked the sound of it.  It seemed to fit the vibe/sound we were going for so we went with it.  We’re based in Southern California which is very close to the Pacific Ocean and The ocean has always inspired my life and my songwriting.

In your music the classical ingredients of Americana emerge, in the instrumentation especially. But, at the same time, you have managed to build around them your peculiar, hushed sound. How did it come about?
John Phinney:  A big part of the concept behind the sound is sparseness. Giving the musical parts space and not being afraid to have less goingon. I try to really feature the vocal and build the instrumentation around it. My approach on pedal steel and banjo was dictated by the sound I was going for and Kyle's songwriting, which is in the folk/Americana vein.
I enjoy and respect classic country pedal steel and bluegrass banjo playing, but I didn't feel those styles would bring out the most emotion from the songs (except for “Someday Soon” in which I do try to some classic country style pedal steel). Kyle's got a special voice and to me it has the most impact when its out in front of the mix. I try to use the instrumentation to ebb and flow with the feeling coming from his vocal.

Since your “Rainfall” Ep you have taken some definite steps towards better production, but you still managed to retain the peculiarity, the warmth of your sound. Can you tell us a bit about the recording and the production of “Incandescent”?
J: Kyle and I do our recording separately for the most part. He does his vocals and acoustic guitar in his studio and sends them to me over the internet. I recorded and mixed "Rainfall" using Pro Tools witha DIGI 001 and a G3 Mac Blue & White. There were limits to what thatsystem could do in terms of track counts and processing power. “Rainfall” was also more of an exploration of styles, mixing thefolk/Americana with elements from modern styles like touches ofsynthesizers, shoegaze-y guitars, Bacharach Maj7s, sound collages, dubdelays, etc. I was taking each track and producing it individually,not as a band concept since the concept was really more of an outlineat that time. It was fun to approach things from different production angles and experiment. The sound of the band developed from that experimentation and subsequent live gigs.

For “Incandescent” I had a little bit better recording equipment (my G3 had died by the time we started on "Incandescent") and a more focused idea for the sound of the band. After producing the “Rainfall” EP there were areas I wanted to improve the sound quality on and with the idea of the sound of the band more fleshed out I engineered it in a more informed and consistent way.
My approach as producer for Greater Pacific is to let the song dictate the instrumentation. Usually I'm trying to create little musical moments of beauty and heartbreak, but I never really know what instrument will be most effective in any given song. I can go into working on a song with the instrumentation in mind, but it doesn't always work or work out as envisioned. 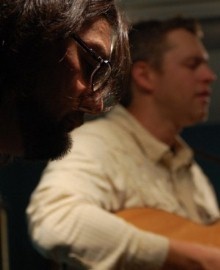 Generally our work flow was like this, Kyle would send me a demo, we would discuss the arrangement and then I'd send him a click track. Kyle would then send me his vocals and acoustic guitar parts and I'd work out the instrumentation and musical parts, and then send an "in progress" mix to Kyle to see if he liked what I was doing. After we both decide that we had something we liked I'd bring in the other musicians (Gretchen Lieberum for female harmony vocals, Rob Smaw for male harmony vocals or bass, Tomas Croucier for bass, and Mike Cusick for drums) to finish the song. Some songs took months to work out,others only a few hours.

The cover art of “Incandescent” shows a painting by Karl Haglund. Why did you choose it and what does it mean for you?
K: I’ve known Karl from quite some time and I’ve enjoyed his artwork.  I asked him if he’d be willing to come up with something for our album artwork.  I sent him the songs and he came up with the painting that you see on the album.  I didn’t give him any ideas…and we loved what he came up with. I think it really works for the sound of the album and I’m excited that he was a part of it.

Your lyrical themes explore mostly daily situations, little epiphanies, something deeply rooted in the Anglo-Saxon and especially in the American culture. Have you ever wondered why, if you agree?
K: I try to write songs that will touch the listener in whatever context makes sense to them.  Give them some sort of feeling that relates to their lives.  I try to get away from writing songs that make it obvious what I’m trying to say.  I want to leave it open to interpretation.
Most of my songs will start off from a few words that I jot down and I’ll build them off that.  Rarely do I edit my songs, it normally will take 5 minutes or so and the song is finished.  If I have to come back to it then usually it won’t make the cut.

What do you think about the present folk/Americana scene? Do you feel part of it? Is there any artist that you especially appreciate?
K: I think there a quite a few great bands out there that play Americana/folk music, but it’s a tough scene to break into. It seems to me if you aren’t an established act you are ignored.  In fact I can’t really think of any Americana/folk acts that have burst on the scene recently.  There is that Mumford and Sons thing going now but I really don’t see them fitting into the scene.  They are more of a pop act.
Some of my favorite bands going today are:  Centro-matic/South San Gabriel, Elephant Micah, AA Bondy, Dolorean, Jeffrey Foucault, Phosphorescent and Richard Buckner.

Back in 2007, you took part with Travel By Sea to the Sparklehorse tribute album “That Horse Yonder”.   Do you think Mark Linkous songs had an influence on your songwriting?
K: Yes definitely, Mark has always been an inspiration to me and my songwriting.  We were honored to participate in that tribute album.  Brian Kraft did a great job in making the song our own. I feel it’s one of Travel by Sea’s best recordings.

How do you live your relationship with live performances?
J: We've put together a great band for live shows (Kyle – vocals and guitar, John - pedal steel, ukelele, guitar and keys, Rob -vocals, bass and guitar, Shannon Hurley - vocals and keys, and Mike -drums) so that if people hear our recorded music and come out to see us they won't be disappointed.
Discografia