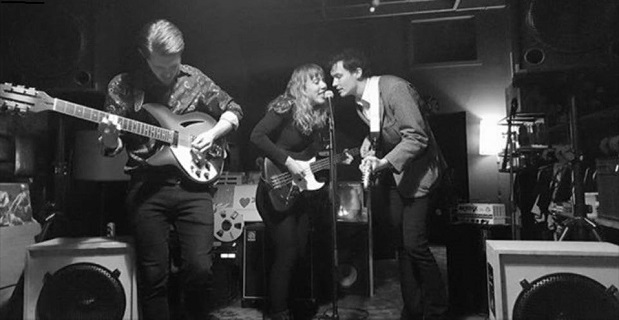 An interview with Heart Beach, one of the most interesting band of the moment...

Okay, guys: introduce yourself… tell us how you met and everything else.
Jonathan: I am a lawyer. Claire is a PHD student and Chris is a public servant. We met at Chris' wedding. We had known each other for years though.
Claire: True, I am a post-grad at uni. Jon bought me a bass for Christmas. It is still the best present I've ever received and a timely replacement for the beat up Falcon I was using at the time. We started the band after that.

Well, what convinced you to play along?
J.: We have always played in bands, Heart Beach is a continuation of that. There was no particular reason we got together to play. I suppose we limited the band to 3 persons with no drum kit and simple "guitar/bass" instrumentation because, in Tasmania, you need to fly over water to get to the big cities to play, this is achievable, but having a complex setup or lots of band members makes it much more expensive.

Let’s talk about your music: it is called “ocean-pop”. Please, explain this definition…
J.: Ocean Pop are everyday songs with bright guitar and feedback.

What are your most important musical and not musical influences?
J.: I'd say the DIY scene in Hobart would be our biggest influence.

Ok, let’s talk about this DIY scene in Hobart…
J.: I think the DIY scene in Hobart is pretty well represented by the compilations that have been released in recent years at Rough Skies Records and Wrong Place (Right Time) Records. They are free to listen on bandcamp.
C.: There are lots of bands that play in Hobart and no shortage of shows at the Brisbane Hotel and the Grand Poobah. There is also a great independent record store, Tommy Gun, and of course MONA - the museum of old and new art that makes Hobart pretty great at the moment.

You live in Tasmania, in a "loner" place, far from the chaos of modern life. Has this fact had an impact on the development of your music?
J.: Environment influences all music I suppose. It's hard to say whether Hobart has directly influenced our sound.

Your first album is a nice effort of minimal pop meets post-punk vibe, an imaginary soundscape where the heart dreams of being elsewhere (in “Holiday” you sing, for example:“Wish I was in Bali/ Wish I was in Hawaii”). Do you agree?
J.: Sure!

Where did you record the album?
J.: The album was recorded at Head Gap Studio in Melbourne.
C.: We recorded with Neil Thomason at Head Gap in Melbourne, because we wanted that shiny studio sound, rather than something diffuse and murky. 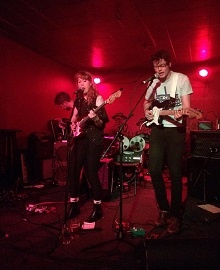 How was the recording process of the album?
J.: The process of recording the album was good. We used a traditional method of booking some studio time and having a deadline, about 5 days to record and mix. It's a very good studio so it was a good experience.
C.: Like Jon said we recorded 12 tracks and mixed in 5 days. We had no choice but to get it done, but it worked well that way. No band fights etc. Jon cooked a big lunch every day in the studio kitchen, and Chris drove us to and from with a car we borrowed from one of our old housemates.

What are the main themes of your lyrics?
J.: We tend to sing about work, sex and depression. Though you'd have to ask Claire about what her songs are about, we write fairly separately lyrically.
C.: I found our lyrics fairly plain, but maybe there's value in that. I write about normality or what is normal for me - working life, going out, travelling, that feeling you get on the weekend, or when you think to hard about time passing.

What kind of feedback have you had after the release of the album?
J.: I would say the feedback / reviews have been good from the media, our shows would get maybe 50 people to them, it took us a year to sell 150 records so it wasn't too bad by our standards.
C.: The feedback has been wonderful - quiet but steady. We've just sold out of hard copies of the vinyl and to be listed in top 10 under the radar bands by Australian Rolling Stone... well that was nice. Not to mention interviews from Europe. But also I really can't wait to tour the next release now.

What are your next steps?
J.: Next steps, we're releasing a 7inch through Rough Skies Records in the next month or two and we'll be touring that record throughout Australia. We will then return to the studio for the recording of our 2nd album, it's about half written.
C.: As Jon said we'll tour the 7 inch in Australia in May and aim to record a new album after that. Wish us luck!

How will the new album sound compared to your debut?
C.: New album will have one half sounding pretty reverbed and the other more rock.

Which are, in your opinion, the most important Tasmanian albums?
J.: Important record for me: Treehouse – Interzone Lp (2014); then Sea Scouts ‎– Beacon Of Hope (1998) and The Native Cats – Dallas (2013)
C.: My fav Tasmanian bands are The Native Cats, Treehouse, Bad Luck Charms, All The Weathers, Quivers and Tantric Sax

Ok, guys… good luck!
C.: Thanks so much for the interview, Francesco!