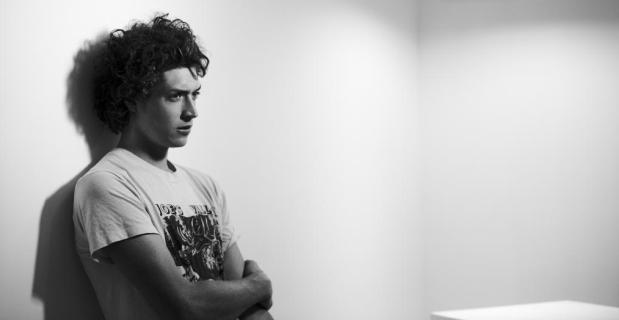 The importance of being Welsh

The folk roots of your music seem closer to John Fahey style, while the psychedelic elements are more difficult to identify, which musicians have really influenced your approach to music?
I listened to a lot of John Fahey in my late teens and still do, The Yellow Princes is one of my favourite albums and I was listening to him a lot around the time of those first albums. I'm a very big fan of the Beatles and their solo albums. Paul McCartney in particular, it's hard to find really bad songs on Beatles records (though there are a few, I know) but all of their solo records have some terrible songs on them as well as all the gems. I think that contrast makes the good songs on the solo records stand out, a George song like 'Give Me Hope' might get lost on a Beatles album. There's no way John would have let Paul do 'Monkberry Moon Delight'.I like Bowies approach to lyricism, I like the Tronics' approach to just getting it done; pressing record and seeing what happens (at least that's how it sounds). I also admire musicians like Gruff Rhys and Euros Childs, they always seem to have one eye on the next record and are in a constant state of creation.

In the plots of some of your seemingly simple songs, i notice a often manic cure for detail, almost as if all that really interests you, is what's around the melody of songs?
The melody is definitely the most important part to me, it tends to be what I write first. I think everything else should serve to highlight the melody when necessary and cut across it if it ever gets too sickly or boring. I also think that the simpler the song in the first place the more room you have to add counter melodies and noises to give it extra texture and depth.

Often, in your album, can be heard some noise that seem accidentally caught by the microphone, is a reasoned choice or random?
It's a combination of both to be honest, when Kris Jenkins and I started making the first album we would try and have the microphones on and recording all the time to catch any mistakes or noises that were unintentional. This is something I continued when finishing the album with Stephen Black (Sweet Baboo). Most often the parts of songs I like the most are the mistakes.

The decision to publish vinyl in very limited editions (150 copies), is due to the actual state of music market, or is a cultural choice and elitist?
It was the choice of a realist. When I released the first two records no one had ever heard of H. Hawkline. It seemed ludicrous to release 500 or more copies of something if I didn't think I could sell them all, 150 seemed achievable. It still took a year to sell every copy of the first LP.I remember at the time someone accused me of being elitist in making this decision, even though all of the music is available digitally.The thought of 450 unsold albums beneath my bed makes me feel depressed.

How was born the collaboration with Cate Le Bon, what kind of sound you try to realize for "In The Pink Of Condition"?
I've played guitar for Cate for the past 3 or 4 years live and have played a little on all her records, her last one more so. I think she's one of the best musicians around at the minute so asking her to produce was a no brainer. She has a knack of deconstructing songs and reassembling them in ways that I would never occur to me or many other people for that matter. She also plays guitar like no one else and writes the best riffs, the tips of her 12 fingers are like an oily avocado pit. The sound of the record is all built around the song 'Everybody's On The Line' I wanted something slinky and, for want of a better word, 'groovy' that still had plenty of sand in the chains. I wanted it to sound like the way Emil Zátopek looks when he's running.

You think that Gruff Rhys has interpreted your music in the right way with the production of Black Domino Box, or misrepresented some elements of your approach to psychedelic pop?Gruff's production on "Black Domino Box" was very casual, he helped a lot with the drum sound and the arrangements of some of the songs. When we recorded Black Domino Box and Ghouls we had been touring a lot as a band, the idea of those records was just to capture us the way we sounded live with a few other bits thrown in for good measure. I think Gruff has the kind of musical mind and ideas that could make anybody sound good, he guides you in a way that is completely subliminal, he wants you to arrive at the same conclusion as him, on your own.

Some critics quoted Felt as a possible reference point of your music, I find instead that the visionary nature of your music is closer to people like Jonathan Richman, Kevin Ayers or Ty Segall, in which of these musicians are a bit 'about you ?
I've definitely been through phases of listening to a lot of Jonathan Richaman and Kevin Ayers, the later particularly so, I love the register in which he sings and his melodies. They both share a good sense of humour.

How important is it for you being Welsh, and what are the real peculiarity of welsh pop-rock?
I feel very lucky to have been born in Wales and to be able to speak Welsh, of all the places and languages in the world, it was a great fluke. It's important to me in the sense that it's shaped who I am, but I don't have any tattoos, you know? I think the bands all share a good sense of melody, on the whole I think we're also able to not take ourselves too seriously all the time.

Which songs you would have wanted to write, and which character would you be in another life?
In another life I would be an accountant who played semi-pro table tennis on the weekends, I would travel to Japan once a year to take part in eating competitions - I would never win and though my inadequacies as a high speed devourer would haunt me they would also drive me to be the best bookkeeper in all of Cardiganshire. Either that or a carpenter.I wished I had written 'Helpless' by the Cleaners From Venus and La Marseillaise.

More than a question, a promise, did you will reissue the first two albums to satisfy the demand of your audience, now that finally the Heavenly has opened the doors of success?
I have definitely spoken to Mark who runs Shape Records about it, we'll see! I'm still not sure how high the demand would be, to be honest! Maybe we could release them both as a double album in an edition of 300. If they all go, who knows, we might even do a CD. It would be nice to do something with them, I don't think even I have a copy if the first one.

Would you like to play in Italy?
Of course, are you asking? I went to Bologna a long time ago with Cate Le Bon, she was playing a gig arranged by a good friend of mine and the tallest Italian man who's ever been to Wales - Dr Kiko. You must know him? I think everyone does, or at least he tells me they do. We were fed the best food morning noon and night and got to go on a tour of the city. I'd like to play in Bari, can you make it happen? Let's start a new email thread where we organise my debut Italian tour...

In The Pink Of Condition