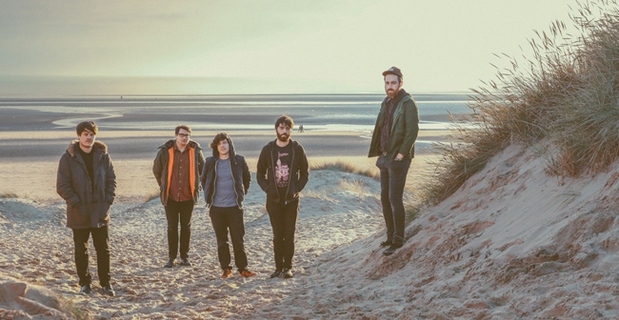 Changing and remaining yourself

interview by Stefano Bartolotta
Tweet
Hookworms' third album releae was the right opportunity to talk on the phone with their guitar player EO. His answers showcae very well the initial intensions from the band in making the record, the difficulties that delayed its completion and the work method of a band that keeps on ascending.

You just use the initials of your names to say who you are, so I would like to understand if there was some line-up change for this album. I know that there was a drummer change from the first album to the second one, so I would like to understand if now you’re the same five people from the second album to this one.
We are, we’re the same, but I used the initials SS, which are my actual initials, but I changed them to EO now, I always wanted to change it since the beginning, I really, really hated that, I’m glad I got to change it now.

I interviewed JN, the drummer, the previous time, and he told me that songs used to get born starting from a big work on rhythm, so I would like to know if it’s the same this time, or if you worked in a different way.
We worked in a very similar way, although the two records sound quite different, we started out with electronic loops which have a very strong rhythmic element, for example “Ullswater” ha a very pronounced, strong rhythmic loop, so, we built the songs around those loops, exactly the same way as we did with “The Hum”.

At which point of the making of the album did you decide to sound so different from the past?
We decided from the very beginning that we wanted to have much more electronic sounds, and our bass player, MB, he’s got a musical project called XAM Duo, he does lot of the synth work, in the last two years he progressively built equipment, piece by piece, so we started recording this album about two years ago, the song that we started with is the one now called “Opener”, which is track number 5 on the album, and we immediately started using a lot of synths and going through a lot of changes, we wanted to move away from the psych-rock and be different, definitely.

I think you can hear that the sound is very different, but still you can hear it’s Hookworms. Do you agree? Did you want to do something that people could immediately relate to Hookworms?
I don’t know really, it definitely sounds like us to me, so I agree that it still sounds like us, and that’s what we wanted.

The making of the album was very long because of the flooding that hit your studio in 2015, but I also know, because I have friends in Leeds music scene, that your leader MJ is also a very requested and appreciated producer, and he produces a lot of music for other bands in Leeds.
That’s right, we started in the Summer, and in December the flood happened to MJ studio, and it took him six months to get back on his feet again, and then his priority wasn’t definitely recording our record, he needed to make money, so we spent an entire year not doing this record, then we started again in 2017, and we recorded most of it. It was a real blow for him, really, really bad.

So, you said your bass player has a solo project, then MJ is also a producer, what about the other three people in the band?
The drummer JN is in a lot of other bands, there’s a band in Leeds called Cowtown and he plays with them, then he does an electronic thing called Game Program, he’s in a two piece drums and guitar band called Nope, they’re really good, but I think Cowtown is his most prominent thing apart from us. I also play music with other projects, and JW, who did the artwork for our first two record, works in design, and that’s quite a strong thing to him.

I knew that the artwork for your previous records was made by one of you, so do you mean that you used someone different this time?
Yes, we used a different person this time, I think that JW wanted to try to use someone else, and he’s actually one of his students, we were really impressed by his work, I think he did a really good job.

There is something different on this album also about the structure of some tracks, because there aren’t the instrumental interludes that were in the previous records, titled with Roman numbers, but I think there’s still a big work on the track list and on how every song is linked to the following one.
Absolutely, that’s very intentional. I think the instrumental tracks were purposely put into “The Hum” to link the songs, but when we did this album, we definitely decided to make changes, and that was one of them, so we didn’t include instrumental tracks on this one, but the sequencing of the album is very important, MJ makes quite a lot of study, so it’s very intentional how the tracks work together, he’s always strong on that, that’s always his goal.

I think that, when reviews will come out, reviewers will probably use dozens of different band names as influences. Do you like this thing or would you like reviewers to describe the actual sound instead of doing a lot of name dropping to make the reader understand the content of the album?
I don’t mind at all, I realize that, to describe how our music sounds, you’ve got to use references, and I think that we really enjoyed some of the bands we were compared to in the past. Sometimes people miss the mark, for example we got compared to Hawkwind quite a lot, and none of us ever really listened to them. But I think it’s actually fine to use references to describe us. I’m just trying to think of bands that we thought about while making this album…

I think that in some songs you can hear the most rock side of Primal Scream, and I also thought about The Stone Roses while listening to some songs, and some harmonies reminded me of The Beatles.
MJ quite listens to The Beatles, so you’re probably right about that part, but I think that most of the music we think about when we make music is American, I definitely think we’re not influenced at all by any part of Britpop, we never listened to The Stone Roses, or Oasis, we think of American music most of the time.

Talking about your live shows, first of all hopefully you’re coming to Italy for a headline show, and in general, with all the changes you made from this album, what can we expect from your live shows?
It will sound quite similar to our old music, we still play very loudly, so, even if the music sounds quite pop in lots of way on this album, we think our live shows will still be quite rough. We also have projections while we play live, so we think it’s going to be quite an intense experience, then, in our album we like to blend the songs together, and so we’ll do the same when we play live.