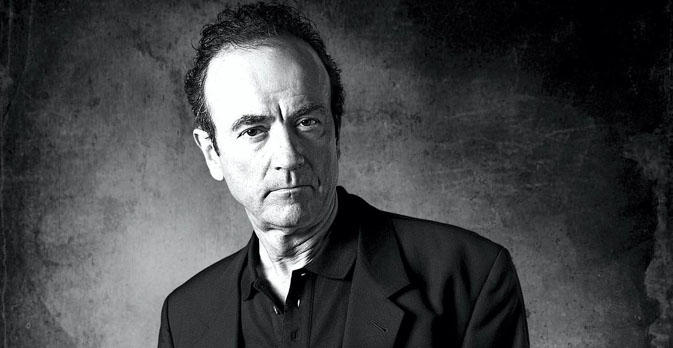 “Music is reversible, time is not” you could hear from a reverse-playing of an Electric Light Orchestra song. You can't turn back the clock, especially if we talk about Hugh Cornwell: The Stranglers' fans hoping – sooner or later – for a reunion with the former band can forget it. Hugh – being definitely right – started, almost 30 years ago, an amazing solo career that gave him a lot of satisfaction while giving the fans fantastic records and unforgettable songs. Not to talk about his raids into literary, theatrical and cinematographic fields. Recently, Monster saw the light; the new effort by the almost-seventy years old english gentleman melts in an interesting way his two souls: the acoustic and the electric one. Plus, it is provoking, so damn much. Here is what Hugh Cornwell has to tell to Onda Rock's readers. Have a good reading.

So, dear Hugh, musically speaking which differences do you find between Totem & Taboo and Monster?

Well, they were created in different ways, I mean with Totem we rehearsed the songs before going into the studio and it was really a live recording, with the three of us: me, the bass and the drum recording live with just a few little extra things. Whereas Monster was created in the studio with no other musicians, so it's quite a different situation to record. But what's interesting is that playing Monster live will be very exciting for me because it suddenly becomes real whereas in the studio it's virtual, you understand me?

Yes, in the studio you overdub and so on while on stage it's different...

Yeah, but I don't mean just overdubs, I mean: we've created the Monster record onstage, there's nothing being left out, it's all as it was! When we recorded – when I recorded Monster, I wanted it to be very simple, so that it could be easy to create. It's got similarities with Totem & Taboo because it's very simple and I did that deliberately but it's different in the sense that it's not live performances, it's studio performances!

Maybe Hooverdam was more elaborated in this way?

In Monster you face either heroes and villains. Do you somehow judge them in the lyrics or do you keep a neutral view?

No, I try not to be judgemental, the lyrics are supposed to have sympathy with them. When I say sympathy, I mean that I just try to understand them! There is a song which is very close to the italians because it's about Benito Mussolini: I don't want to say that he was a good man but I try to understand, because in the beginning he was a socialist and he wanted everyone to be happy, with a job and enough money to live happily. It was only when he connected with the german man- the tyrant – that things changed. I'm saying the same about Mugabi, I am sure that when he started his life as a revolutionary he wanted the best for his country, But we all know that power corrupts and this is what happens: their ideals were compromised. The important thing that I've understood now, after it's finished, now I understand that all these people on this record – Monster – have had fantastically interesting lives, you know? Very interesting people, whether they be good or bad people, but fascinating and interesting, people who achieved things! So they are famous for a reason, while now in today's society we find people who want to be famous but for nothing! They haven't done anything so you end up with people who are famous...just because they are famous, for no reason! So I realized that what I've made is a comment on today's society, for some reason...I don't know, why the people want to be famous, I don't understand it! Maybe it's because they find it difficult to have an identity in today's world, to make an identity for themselves so they are individuals, so they think if they are famous they will be an individual?

Yeah, it's quite shallow...

Yes, beyond Andy Warhol! Because it was something different back then...

Yeah, yeah, exactly! I think you get it!

Sad but true but also funny, you're right...

Yeah, it's funny, it's humorous. I always see the funny side of things, even Mussolini!

Tell us something about Restoration, the acoustic rearrangement of some Stranglers' classic songs. It's featured in the Monster album as a bonus...

The idea came from the record company Sony, they liked Monster but they said: “Let's try to get the interest of the fans of The Stranglers, maybe they are not interested in your music alone. Let's get them interested with something by The Stranglers!”. They knew I do acoustic tours every two years and they asked: “Why don't you record an acoustic album?”. I've never done this before, I've recorded live concerts acoustic and I released them but I've never been in the studio to record an acoustic album! The idea sounded quite good, so I picked some songs that I think work very well with acoustic guitar and a few little extra things. I wanted to make it very dark, almost like Johnny Cash or something and that also influenced the choice of the songs, songs where I sing in a low baritone register rather than high voices. Yeah, I'm very happy with it, you know it took almost as long to make the Restoration as it did to make the Monster album!

Yeah, something like the American recordings by Johnny Cash, actually...

Yeah, it takes a lot to...the less things you have on the record, the more careful you have to be at how they sound!

Yes, especially acoustic. How is to work with a major label such as Sony in this weird digital era?

It's fantastic, they are very good people, very forward with great ideas. They come from independent labels, so they have independent mentality! They like what I do so I am in a very fortunate, a very lucky position at the moment since they are very interested in what I'm doing, I'm very pleased .

Are you working on extra-musical projects at the moment?

Is there something you miss and you don't miss from the days with The Stranglers?

Well, I don't miss the fact that you have to be very careful when you are in a group because you have all the politics! So I don't miss the politics, I can do what I like now, it's my show you know...so I love that! I don't really miss anything: the people I play live with, the bass player, the drummer and the crew...we are like a little family, you know? That's very good, we have very good relations with each other! No arguments, everyone's happy, we enjoy the company of each other and we are like a little gang. It's a very good situation, very positive and the results are in the shows: the audience enjoys the new shows, they say it's the best sounding, things like this!

Could you send out a final message and greetings to the italian fans of Hugh Cornwell?

Yeah, I mean...I'm very unhappy that I can't come to play in Italy, you know...it's one of my favourite countries, I've got lots of italian friends, I enjoy being in Italy so I am very sad that I can't come and play there...you know that! I just hope that at some point soon there will be the opportunity to come and play in the towns, in Bologna or Milano, Roma...all these lovely places! I am looking forward to it...it will happen, it's just that I don't know when! I mean, now the profile is bigger with Monster and Sony, maybe now more people will be interested in trying to arrange and bring me in, you know? So, I think that hopefully it will be sooner rather than later!