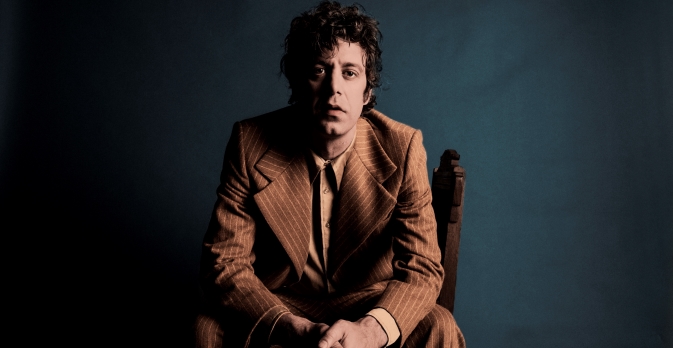 Your new album is called "Waiting Out The Storm". Which storm are you referring to? Is it perhaps a climatic or political storm?

It’s a storm of fate and trial. A storm of time and blood. It will never be over, but we will.

In your lyrics there are numerous references to contemporary issues, from the climate crisis to racism still widespread in our society. Are your texts deliberately politicized or are they mainly personal reflections based on the observation of what is around you?

It’s more of a personal reaction than any intention of being political. I don’t want to be politically charged. I’d rather be writing about ancient cities and telepathic sea people. I’d rather write about Buffalo Bill falling in love with Medusa.

Do you think that artists should deal more with issues like these? (e. g. the climate crisis)

Yeah, I think it’s important to use your inner frustrations. Speak out against the greed that is ruining our planet, and small-minded racism. Make sure that it’s good though. A bad protest song is worse than none at all.

“Tomorrow People” is a wonderful opening track. It seems to address both the people of the future but also directly the listeners. How did come to you the idea of writing this song?

I saw the words on a junk store bookshelf and just kinda rolled with some lines in my head. Wondering  what damages are really occurring in the present day that will greatly affect the future.

Once I got home all I had to do was write it down. Margo helped on a couple lines too.

Both your and Margo's latest album testify how a certain American music is in turmoil and new voices are taking their rightful place in the scene. What do you think of the current Americana and contemporary country music scene? You had the chance to work with Sturgill Simpson too, didn't you?

Well, I’ve known Sturgill for about a decade. I would never consider him Americana. I would consider him southern in tone but not even country really. I don’t really know what Americana is. I don’t really care what it is. Music is either good or it’s forced. I’d prefer to make good music, and leave forced music for selling Stetson hats and iPhones. I don’t like genres that much. I make American music, but other cultures are in there too.

What is it like to work and write songs together with Margo? How much do you influence each other?

It’s just about my favorite thing in the world. We influence one another a ton. We’re competitive and we push each other out of our comfort zones.

When you are intensively working and composing together how do you manage to separate work and your private life?

If I am not mistaken, you wrote together the text of "Someone Else's Problem" in a kind back and forth, one verse at a time. Yet the text is very uniform, coherent and gets straight to the point. Do you always find this harmony when you write together?

Most of the time, yes. I’ve written many things in Margo’s songs that are from her point of view. We’ve figured out how to speak for each other, and make it very natural.

I imagine that the song was written in 2019 or early 2020. Nevertheless its words are very topical in this second half of 2020. The references to the killings by the hands of racist police officers and to the climate crisis seem to refer to what we witnessed last summer, with the killing of Floyd and the outbreak of protests and then the violent California wildfires that dyed the West Coast sky apocalyptic red. Do you feel a bit like a prophet?

That’s a wonderfully worded question. No, I don’t feel like an sort of prophet. When you write a song like that, you just kinda feel broken... Obliterated. It’s sadness that turns to anger. I’ve spent many years learning how to turn my feelings into words. I’ve read books upon books, from Gibran to Vonnegut to Plath to Lorca. I can’t touch their work, but I have my own to worry about. Like I said, I don’t wanna write about this stuff, but when precious lives are being stolen in broad daylight by hateful men, there’s no ignoring it.

The surreal and the oneiric are recurring themes in your songs (“How It Has To Be”, “Movies”). Is the effect intentional or is it rather the result of a momentary intuition, ideas that come up, which you then transpose into a song? Do you think it is perhaps a poetic strategy to give lyrics multiple meanings?

I try not to over think the poetic muse, I let it flow through. I’m not too worried about it making sense or not. If it’s good and flowing, it will be understood. In “How It Has To Be”, I wanted make the point that all history is happening at once, and our biggest problems are timeless problems.

“Movies” was just transcribing a dream I had. I welcome the absurd, because there is truth in it.

Has anything changed in your writing process since your solo debut?

More freedom. I don’t think I could have put “A robot president that plays golf” [in “Things Could Get Much Worse”] on the last record.. haha

Has the long recovery after your experience with Covid-19 and the quarantine affected the way you make and conceive music?

Yes and no. Composition is an internal thing. Maybe hardships inform that deep place. I’m certainly enjoying the smaller things in my life more than before.

Last year you said you were planning to release a lot of music soon. Can you confirm that this is still your plan? Will you release new music in 2021? If so, can you tell us more about it? Is there a common theme, a concept, that links the songs from your next record?

Yeah, I’ll have another one next year for sure. Margo will too. Hopefully whatever mine turns into, it will be based on good songs, If not, I might become a rodeo clown or something.

Thanks for your time and stay safe!

Thank you very much! Hopefully I’ll get over to your beautiful country and eat and drink my way to heaven.

Waiting Out The Storm