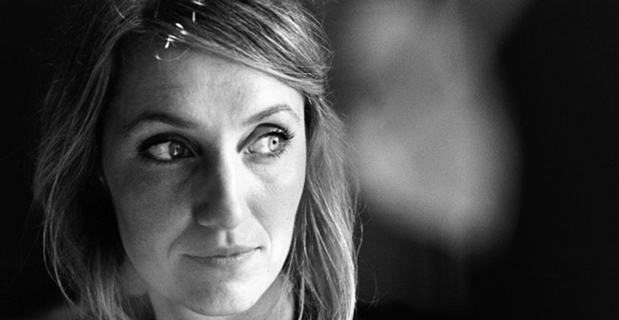 For someone who's never been to Kentucky, the Bluegrass State, it is easy to believe that the land itself is behind Joan Shelley's music, because her naturalness is too much of a rare thing among the ones who choose to perpetuate American traditional music. Obviously, she has grown up where that music is chewed, stepped on, taken to bed. And she has a voice that tastes like wheat sheafs bathing in the sun.

So let me first talk with you about this new album. I loved your first record, but I think you have reached, with “Over And Even”, an atemporal quality that is probably the key of folk music in general. Do you think something has changed during these years in your relationship with music and songwriting and how?

I've just been trying to write more, show up more, instead of the way I used to just let them come at me while I was doing something else. I listened to more of  the lyricists and recording artists I admire: Will Oldham, Elephant Micah, Bill Callahan, Dolly Parton, The Weather Station, Leonard Cohen, Joni Mitchell. What they seemed to have in common was a sharpness of observation, an intimacy in delivery. A directness. I've tried to be more direct with this album, and have as few things as possible in the way of the song and the listener.

“Over And Even” also came just one year after “Electric Ursa”. Can you tell us about the conception of the album?
This new album came quickly, as soon as Nathan Salsburg and I recorded the song "Electric Ursa" (the title track of the last album), we knew we had something good there. I wanted to swiftly make another bunch of recordings that rode that same wave. I'd written a bunch of songs in the spring after "Electric Ursa" was released, while traveling by myself ahead of a tour. I brought them home to Kentucky and Nathan and I worked up the arrangements and went into record them. The idea was to put in only what was necessary, and nothing more.

The record reminds me in a way of the understated greatness of “Stray Age”, its endless warmth, its hushed power. You have even shared your name with DMM on “Farthest Field” and he is the engineer on “Over And Even”, and he was a co-producer on your debut, “Ginko”. How did you two meet and what is your relationship like?
While myself and Nathan produced "Over And Even", Daniel played a crucial role on this record as an amazing engineer. He figured out how to put up just the right microphones for the guitar and my voice and was a trusted ear on which take was the one.  He was so generous and patient with Nathan and I, letting us record this record in his living room.
We first met during a tour he was doing with Ben Sollee when they invited my old-time trio, Maiden Radio, to open for them at a theater in town. We kept in touch and now Daniel is my neighbor. We've toured a lot together and been through hours of recording together. We know each other so well. He's like my brother.

What is his specific contribution to this record and to your music in general?
Daniel has been a great help to me in encouraging me to pursue this path, and supporting my earlier efforts, like "Ginko". He's a great champion of traditional music from our part of the world and Maiden Radio as well. He's got a great little record label, Ol Kentuck, that he uses to put out stuff he knows to be good but no big labels would give room to. That's how I got "Ginko" and all of Maiden Radio's records out there. He's one of those music superheroes that are out there.

You came back to a minimal sound and arrangements with respect to “Electric Ursa”. What made you decide again for a more intimate setting?
Again that goes back to the idea of directness. The less there was between the songs and the listeners, the better, in the case of this record. We built the record up from the song performances, instead of up from the rhythm section like we did with "Electric Ursa". The bones were the songs as Nathan and I performed them live.

By the way, I’m a big fan of Nathan as a guitar player, I think his understated but soulful style is a perfect fit for your music and voice. How is he involved in the recording process and does he influence your songwriting as well?

Every song on the album (except "My Only Trouble" - he was in the kitchen when we got the take unexpectedly) was recorded with the two of us sitting across from each other. There's bleed in all the microphones, you can't separate the parts. His guitar, it's harmonies, rhythm, it's iridescent tone, it is such a major part of the overall sound. The character of this record rest on the two of us equally.

“Over And Even” also lists the collaboration of Will Oldham, a myth of contemporary folk. You’re touring with Doug Paisley and Elephant Micah, another two favourite contemporary folk artists of mine. From the outside, it looks like the contemporary Americana scene is quite tight, with collaborations and labels sprouting freely here and there. Is it also a merit of nowadays “digital” connections (funny that they might be that important in such a “traditional” genre) or is there a  physical place where things are born?
You're right, it's a funny thing where digital-age meets traditional music. I think we are experiencing something that will be very interesting to look at from a distance.
It feels like a special magic that I can call up folks like James Elkington in Chicago to record some overdubs in between his Steve Gunn and Jeff Tweedy tours, or Rachel Grimes to record something on her piano at her home in the country.. and make an album that still sounds of a place to me. I prefer live takes, I love old recording techniques and mics, but man, we've got a special tool on our hands with things being digital and so portable, and folks like Elephant Micah, Will Oldham, and Doug Paisley showing how to use it for good, how to make a powerful record - a thing dangerously bordering on irrelevance because of that same digital technology.

I have never been to a folk concert in the US, but for sure here there is a sort of detachment from what is supposed to be “popular” music (meaning “for the people”, of course) and the people themselves. Sometimes it feels intentional on the artist’s part, surely not from yours. Is that for the most part the situation overseas? What is your relationship with playing live and are you trying to regain that kind of pristine sense of making folk music?
I think I hear what you're saying - Pop artist seemingly designed to appear not-human, super human, or "perfect," and so songs and people come across as affected or fake, and out of our reach. I think there's a fine line that performers have to walk. You want to put on a mask at an Event. The benefit of the mask-wearing is when the experience helps people transcend the limits they feel as an individual, and you try to create a shared experience. It is done all over the world across many cultures. But sadly I think in pop there's an unrealistic and incomplete representation of what it is to be human. What's refreshing about the folk genre is that the masks are less constructed, more transparent and vulnerable, maybe darker and uglier at times. It's a side that needs more air time, a side that is better exposed than concealed.

Is there any hope for a European tour and some Italian dates?
We are working on a tour in March, and yes, there are penciled in dates that we hope to be in Italy. It would be my first time there, so I hope it works out.