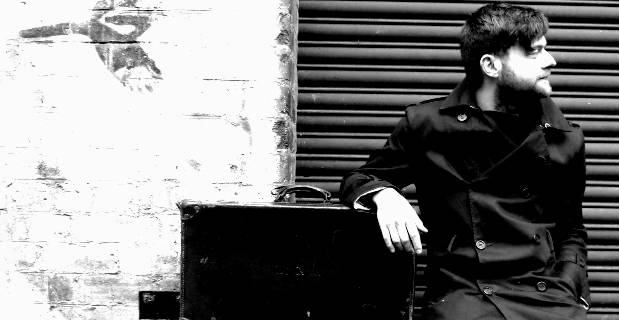 The world in a suitcase

interview by Matteo Meda
Tweet
The first time I listened to something from you – was "People Do", last year – I immediatly realized that your sound was really hard to compare or link with something else. Something very particular and personal. So, I really got surprised when I discovered it was your first output. The question is a bit unusual, but sounds like “how is your music old”? I mean: when did you start to develope the style you have evolved 'til now?
It’s quite strange really. I’ve been making music for most of my life in various capacities and I always knew that I wanted to develop my own sound through a solo output, but somehow it took until about 3 - 4 years ago when I was in my late twenties, until I felt that I could truly pursue this path properly. For the longest time I’d been imagining the sound world that my music would inhabit, but was only able to actually realise it in the right way when I started working on the songs that eventually became "People Do". It suddenly felt right and I knew it was the start of a new chapter. In the end not too surprising though - I’ve always been a bit of a late starter.

What are your “sound sources”, from which you take your inspiration?
Sound design has always been incredibly important to my work, as well as a fascination for the acousmatic. It can be unusual instruments just as much as field recordings or found objects that get me inspired. I do a lot of recording in and outside the studio, so by the time I start working with them, the original source is often obscured, which I find quite exciting. At the same time I really enjoy to elicit unusual sounds from ubiquitous instruments such as pianos or guitars. My mantra is, if I’ve heard something like it before, it doesn’t interest me - when I find a sound that gives me an immediate unusual or specific emotional response on the other hand, I feel like I’ve struck gold. New and exciting sounds are everywhere, at all times and yet so many people keep going back to the same repertoire in musical contexts, especially in more conventional electronica. To me a huge part of a musical identity has to come from an idiosyncratic sound world.

How much do you feel close to the so-called modern classical musicians and how much, instead, to experimental electronic? They're both main elements of your music, aren't they?
I couldn’t say that there is any particular genre that is a more or less important element to what I do. Modern classical is a term that is attributed to a great variety artists, often working with piano and whose work is difficult to define, making it very questionable genre description for me. I neither listen too much so called modern classical music, nor do I feel as any part of it. As I’m neither classically trained nor a brilliant instrumentalist, I’ve always relied on intuition and sonic exploration on my musical path. In that way I might feel a little closer to experimental electronic composers. Although fortunately we are living in times where these genre boundaries are linguistic separations that seem to get more and more blurred in the real world.

I also noted you use electronic in a very dropped way, mainly in order to create the rythmic elements. But it never goes to overpower piano, or melody in general. Is this a precise stylistical choice?
You could say that. I always wanted my solo work to have a significant rhythmic side to it, which might be a reaction to my film and TV work, which is often strictly ambient. For me the context is important though: I like my rhythmic elements to have an organic base, originating from my own acoustic, real world sources, so even if they are sequenced electronically, their live or living nature should come through. If I could achieve the electronic side of my music sounding almost as if it was being played live in a room, I’d be very happy. The blending of these two worlds is probably at the core of what I’m interested in.

Instead, in "Walizka" there's a lot of piano-driven tracks... Can we say that piano is your main instrument?
I’m really excited by the immediacy of the piano, but also the scope of unusual sounds that can be extracted from it. The piano I have been using for both "People Do" and "Walizka" is a relic from my grandmother and well over 100 years old. It simply has a beautiful tone and sustains to it and plays extremely easily. I guess my relatively recent obsession has led to the piano being the main instrument for the moment, but it does changes quite regularly.

So, what instruments do you use to play your music?
So far piano plays a major part, as you mentioned. My original and first instrument, although I currently don’t use so often, is the electric guitar. Then there’s all sorts of analogue synthesizers, electric bass, the odd string instrument, percussion and a huge selection of contact microphones and effects units that I use to create my own drum & percussion sounds.

"People Do", your first album, was also quite different from "Walizka", an Ep Denovali published last month that was actually older. What changed between the two, from your point of view?
"Walizka" was initially released as a teaser for my debut album, but it was actually newer material, so we decided to re-release it recently alongside some new remixes. For me it’s a natural evolution from the "People Do": I wanted it to be more immediate in its sonic and compositional approach, but also more densely atmospheric. My production style had changed quite a bit too. Whereas I had an anything goes’type of approach on "People Do", for the EP I wanted to use only my own home-made sounds and mainly analogue sound sources. This is even more so the case for the new material I’m developing - I guess you get more orthodox with old age!

But I'm sure they have an important link, that's represented by the artwork. How has it born and what does it represent?
Even though they are two very different releases, album and EP stem from roughly the same time period - I started making "Walizka" just after I’d finished the "People Do". Those two years were for me largely dominated by lots of traveling around Europe and many poignant impressions from new places, which fed into my work, not only through field recordings from those locations, but also their moods and atmospheres. I wanted to somehow represent this in the artwork, so Łukasz Bernacki (the sleeve designer) and I devised these series of impressionistic images by photographing a mixture of selected objects from my travels through a matte glass plate. To me it really links to the music, but I also hope it’s open enough for people’s own interpretations.

You live in Scotland, quite a particular country: I think it's easy to find its landscapes into your music, for example in a track like "Walizka"'s title track. Does it represent an important element for you?
I’m not sure how much the landscape of Scotland has a direct influence on my music, but it’s certainly very important to have a close connection to nature for me. I’m definitely more of a city person, but very much depend on the contrast forests, fields, mountains and the sea to function properly. You could say that this contrast is represented by the rivaling electronic and acoustic elements in my music.

Again about that track, you've also made an interesting videoclip... How is it linked to the track's history and meaning?
"Walizka" means suitcase in Polish. It’s a beautiful word in its own right, rolling nicely off the tongue. The theme for the track however was on one hand the notion of everything that was important to you fitting in one small suitcase, but also the idea of compartmentalizing uneasy things away into boxes, which is where the director, Tobias Feltus, and I came up with the idea of the haunting wooden man (a puppet created by sleeve designer Łukasz Bernacki) breaking free from a shackled suitcase to roam the smoky backstreets of Glasgow. I’m not even sure this ‘storyline’ is even particularly obvious in the video, but the resulting atmosphere definitely represented our intensions.

I readed you worked a lot for BBC, mainly composing music for documentaries... How much important has it been this experience?
In many ways my work for television and film shaped what I do now as a solo artist, although the bodies of work couldn’t be more different from one another. In one way I’m able to hone my musicianship and compositional and production skills through it. But it also gives me an outlet to my sunnier, more commercial, pop side (it does exist!) and therefore gives me the freedom to concentrate on more sonically and compositionally challenging work with my solo project. You could say it created an undisturbed room for me to work in. Surely there’s a yin and yang analogy in there somewhere...

But you've worked also with other kind of media haven't you?
Sound for theatre was my first love, but I quickly moved away from it to concentrate on other media, especially stop motion animation, which has fascinated me. But I also enjoy collaborating with dance, physical theatre, visual artists and the like. If I like a project or the people working on it, the medium is secondary.

Why did you decide to call your website “Lost In Sounds”?
The website was set up ages ago to bring together my various interests and projects, so I wanted to keep it as open as possible, with a focus on what matters most to me, so the idea of being ‘lost-in-sounds’ seemed like a name that would be appropriate for years to come.

How do you bring your music on stage and what does it represent for you?
It’s always an experiment to do the tracks justice in a live environment, give them a new shape and to be honest I don’t think I’ve found the ideal solution yet. It may not exist but I keep trying. There really is nothing better than playing to an audience truly interested in music and no better way to get new listeners. I’ve recently played some festivals in Berlin and Essen, with some great reactions that really caught me off- guard. It’s the best motivation to keep you going on your musical path.

Do you prefer to call yourself a composer or a musician?
I’ve never really been very comfortable with either, but got used to both of them by now. What I do is probably most accurately at the intersection of a composer, musician, sound designer and producer and that’s where I enjoy being.

What projects are you working on in this period? Have you got something planned for the next months?
It’s been a very bizarre year so far - I was evacuated from my flat and studio in spring, due to some structural issues with the house. It happened with no warning from one hour to the next and ever since I’ve been a bit of a nomad, staying in various places between Germany and Scotland with only a backpack of my most basic possessions. I had just started work on the second album, which has now been very much influenced by this inlimbo-state. As of November I will be back in the studio working on the new record full time and can’t wait to get going. Aside from that, I’m planning a live sound design installation with my friend and fellow performer Rodrigo Malvar in Portugal next year.

Head photo by: Łukasz Bernacki
All other photos by: Markus Werner
Discografia