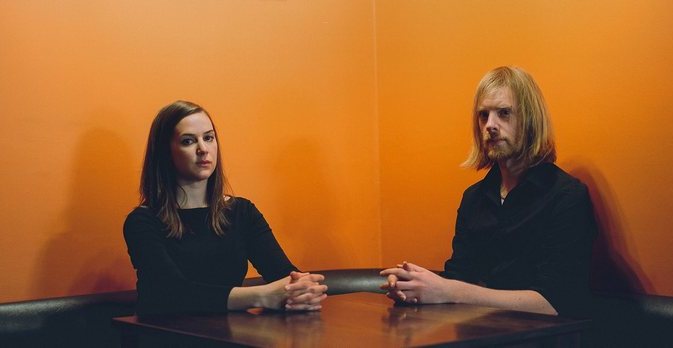 interview by Stefano Bartolotta
Tweet
We met this duo for their foirst ever Italian live show, a supporting act for Riley Walker in Milan. Their answers are always focused and interesting, and are mostly on the idea of looking at the tradition without replicating it and on the importance of empty spaces in their sound.

How did you meet and start working together?
Josienne: Ben was in an indie-rock band, the name of the band was Lights. A friend of mine was their sound engeneer. He heard Ben playing an acoustic guitars and liked it, so he asked him why wasn’t he doing some acoustic projects. He said he didn’t know any singer. Meanwhile, I was playing my songs by myself, but my guitar playing was bad, I felt I needed somebody else to improve my sound. Our mutual friend put us in touch, it was seven years ago.

How does your songwriting process work? Didi t change during the years?
Josienne: I mainly have a basic idea for a song, then I take it to Ben and he arranges and develops that. It’s pretty much the same way, but, on the new album, there was more of a collaborative process, with the two of us in the same room.

How did you work on the sound building? I read that, especially on this new album, there are a lot of musicians that played.
Ben: previously, we’d put together some sort of demos, so we recorded a first version, then some more versions. On this album, we’ve dome something more of a live sounding, so we demoed first, but with some musicians already with us.
Josienne: so, we had a pianist, a double bass player, a drummer, and most of it was done live, and it was different than we did before. That changes the sound not only on the record, but also in terms of how we coinceive it.

Could you have these musicians with you for more time thanks to the Rough Trade signing?
Josienne: yes, this signing didn’t change our sound itself, but gave us more resources to develop it. There were things that we wanted to do, like recording live in a studio, which we had not been able to do.
Ben: we didn’t have the budget and the space.
Josienne: you have an idea, but you need these resources to make it come into fruition.

You released on e album for three years in a row, from 2012 to 2014, then nothing in 2015, and now this new one. Maybe having more resources and spaces also meant that it took more time to finish an album?
Josienne: we had already decided that an album every twelve months is a bit hard to do, so I think we would have not released anything anyway in 2015.
Ben: we basically said to ourselves that we needed to take a year off.
Josienne: it wasn’t that we weren’t working on it, but we decided that we wanted to take it slower, and more carefully and relaxed, because, to get to finish and album, then finishing another one in twelve months, it’s quite a lot of work, we decided tht we would take it a little bit slower and easier this time.

On our reviews, we wrote that your music looks at the tradition, but it’s not traditionalist. Do you want to tell me something about that?
Josienne: I think it’s a good point of view.
Ben: “folk music” has always been a label applied to us, but it’s a good observation saying that we are looking at something, because it’s an influence and we’re not trying to replicate it.
Josienne: we’re into jazz, into electronic music, into indie guitar-bass stuff. Traditional folk is only a part of our collection and of what we want to do.

About looking at traditions, you’re known also for your cover versions of other songs. Are you already preparing more cover versions, or maybe, in the future, do you think you’ll be releasing an album with only cover versions?
Josienne: yes, we definitley considered it, I think it would work well. We feel that, if you do a cover version, you have to change the song in some way, and bring sonething, or attempt to bring something, that wasn’t there before. We just don’t want to just replicate the song.

I read, on the press release, that with this album you try to look at new horizons, while the previous ones were quite related to the folk traditions. But I think that the leap, in this sense, that you took between “Fire And Fortune” (2013) and “Nothing Can Bring Back The Hour” (2014), was bigger than the one from that last album to this one.
Josienne: yes, I agree, but there are a lot of things to consider. We released an album in 2010, there are very few copies of that, so a few people could listen to it, but if you do, you would hear that some of the things we made on this new album were already there.
Ben: to be honest, “Nothing Can Bring Back The Hour” feels like a quite stable folk album, but for this new one, we just wanted to make ita s big as possibile and we wanted it to take us wherever we wanted.

About the concept behind this album (the cycle of night and day), is it the first time that you create a concept? And is the sound of the album also influenced by the concept, or is it only about lyrics?
Josienne: I think we always gradually worked towards the idea of albums that have a concept, but on the previous albums, the concept was there but was quite loose. I think waht we did was just tighen it up towards a more clearly concept album. I think we got better at developping it.

About your sond, when I listen to your music, I feel the importance of leaving empty spaces in the sound, rather than filling it. The empty space, in a certain way, can be very powerful.
Josienne: spaces were always very important in our sound, there’s loads and loads of spaces in it. Also on this album there might be even for or five more instruments than in the past, but there’s still a lot of space.
Ben: this idea is very important for the dynamics of the sound. Just because you can put in a sound, doesn’t mean you have to. Leaving space is caring as much as using an instrument.
Josienne: we’re quite careful about not sounding too much or too little and to get that “just enough”.

A question about the tracklist, and in particular, about the moment when “The Waning Crescent” comes. I think it’s the perfect moment because it kind of releases a tension that is building up with the previous songs.
Josienne: the song is about the moon, and it was meant to be about when you are in the darkest part of the night and there is a big burst of moonlight.

This was your first time ever in Italy. If you come back in the future, maybe as headliners, was can we expect from your live shows?
Josienne: we sometimes play live with other musicians, but most of the time it’s the two of us. There are versions of all our songs that work with just the two of us too.
Ben: we always try to reinvent what we did, and there is again the idea of space, it influences what happens on stage.
Josienne: yes, space is very important, our live sound is sparse and delicate and quiet, but doesn’t mean it’s sad.

Nothing Can Bring Back The Hour