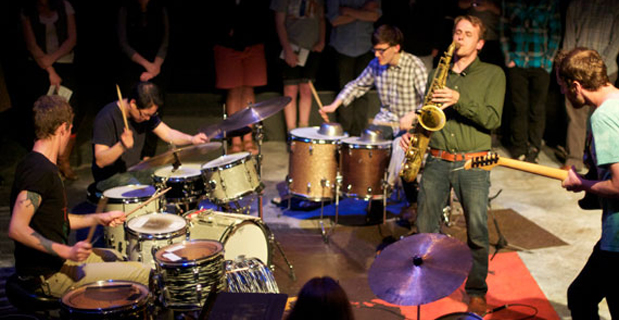 When KTBT adventure begins?
We first began to play as a group when I curated an event called the Racer Sessions back in February of 2010. Racer Sessions is a weekly event at Cafe Racer in Seattle where a different curator debuts a new composition each week which is followed by a free improvisation jam. It’s something that we’re all very involved with. We’ve appeared there as a group three times, debuting new music each time. It’s fun! On this night in particular I arranged some music that attempted to fuse rhythms from Haitian drumming with the type of improvising that happens at Racer Sessions and see if we could create sort of a hypnotic effect by pacing things very slowly and playing with lots of energy and control. You can listen to the recordings from that evening on the Racer Sessions website

What King Tears Bat trip means?
Nothing. There is a story though. We got booked to play at The Improvised Music Project Festival in Seattle, and we didn’t have a name. Evan Woodle called me when Kristian Garrard and I were in Austin, Texas playing at the South by Southwest festival, and he needed a name right then because they were making a poster for the festival. Kristian and I had just walked past a place called “King Tears Mortuary” and we were laughing about the fact that someone had recommended we check out something called the “Bat Trip.” What this person was referring to was an amazing phenomenon where a million bats, that live under a bridge in downtown Austin, wake up and fly out from under the bridge at the same time turning the sky black. The name King Tears Bat Trip is nothing more than a combination of phrases that we were laughing about at the time. It’s a nice little souvenir from Austin.

I thought KTBT was a moniker influenced by the album "Bat Chain Puller" (Captain Beefheart)!
That is not the first time we have been indicted with a beefheartian infraction. however, i assure you, the nature of this coincidence is purely of cosmic conduction.

What is your musical background?
I took piano lessons as a little kid, played guitar in hardcore bands as a teenager and studied jazz bass in college. Now I do different sorts of stuff. I mostly play bass. In this band I play a weird guitar with 6 of the same string. Everyone else has had different musical backgrounds. We all (except our signature New Yorker, Brandon Lucia) come from different parts of Washington State where there is a remarkable variance in music culture and education based on the region you are in. For instance, Chris, Evan and Neil have been burning jazz musicians since they were little kids because they went to Seattle-area schools that have a huge emphasis on musical education and a reputation for cultivating young, talented musicians.

So, you play "a weird guitar with 6 of the same string"...
Yes. I play a guitar that has 6 strings that are all .017 inches wide. i tune them all to approximately the same pitch, "G". the original idea for this was to make them sound, very approximately, like a chorus of 6 people singing in response to the tenor saxophone cantor melodies. I think that this original idea was long since been abandoned and the weird guitar has begun to thrive as it's own thing, more focused on making unintelligible noises than mimicking a group of singers.

Any guitarist that has particularly influenced you?
Lately I really love blues guitarists like James Davis, Junior Kimbrough or Jimmy Lee Williams. Mostly all stuff that my friend, Ben Todd, of Lonesome Shack has showed me. That stuff may sort of indirectly influence what I do in Bat Trip, but only so much as I think about how much I like the sound of their guitar playing, and then I play guitar and try to make sounds that I like. I don't play any of their licks.

Let's talk about Brandon Lucia's "Chango"...
Brandon is a brilliant computer programmer/musician/composer. He created the Chango which is a “video-audiolyzing synthesizer” that he performs on his laptop. It is the throbbing drone noise featured in the middle of “Elevenogram.” Taken from his website: “The Chango converts video to audio in real time. The pattern of light in each frame of the video generates a harmony that is unique to that pattern. Chango lets you use your camera to audiolyze the world.”
I encourage everyone to go to his website where you can download a version of the Chango for your computer. It’s cool!

I really like the cover of your album...
That was the idea of Kristian Garrard, who is responsible for most of the band's visual artistry. He is seen on the cover of our album wearing a mask with a feather boa strung through its eyeholes.

Your music has an evident link with the Albert Ayler sound... especially with his "bandistic" sound...
We love Albert Ayler’s music and would cite him as an influence. Neil Welch has studied his music extensively and his approach to melodic phrasing, in this group, sounds Ayler-derivative to me. I also love the way his ensembles would shift so decisively between stark textures in their improvising; paring down to smaller instrumentations or bursting into some march and never relaxing their intensity. As a band, we work a lot on playing without hesitation, and always concentrating on the arc of the entire piece.

Is your music a new expression of free-jazz or it's a mix between free-jazz and rock sensibility?
It’s a mix.

Which are your most important musical and not musical influences?
All of our influences are equally unimportant. I love hot tubs.

Has your musical a political value?
The band doesn’t have a political agenda, nor do we have any political messages in the music. If listening to the music causes someone to consent to a certain political persuasion it is probably due to convictions they already possess. Political ideas require discussion and consideration, I would say a goal for our the music is to minimize thinking. We all have individual political beliefs, but those are far too fucked up to talk about.

What kind of feedback have you had with your self-titled album?
It has done relatively well in the states, but gotten a lot of attention in Europe and Italy in particular without us having any connections there, which is awesome. I hope someday we can tour there as soon as someone invents Just-Add-Water Drumsets.

The definition of your music is "psych-trend/post-drum circle": do you want explain it?
I want to, but unfortunately there’s not much to explain. It’s just a fake genre. Something a little humorous and perplexing to fill a text field on a website with.

Is there any band that you feel particularly close to your sound experience?
Besides the Haitian Stuff? I can only speak for myself, but as far as ensemble playing goes, I feel tied to the band that Albert Ayler used on this album "Live in Greenwich Village" with Donald Ayler, Henry Grimes, Joel Friedman, Alan Silva etc. Also the group on John Coltrane's "Live in Seattle" which features the classic quartet plus Pharoah Sanders and Donald Garrett. That's an incredible album and not just cause I'm biased being from seattle. I have a friend that was at that show in 1965 and said it fucked him up for life.

Let's talk about Table & Chairs...
Several of us started Table & Chairs and continue to work for the label. You should check out all the stuff on the label, there is a ton of really amazing music, that I think it is as happening as anything out there, and not just because I'm biased.

Your opinion about peer-to-peer, music and internet, industrial record crisis, etc?
The music business is relatively infantile compared to how long music has been around for. I think the two are still figuring out how to exist together. I sucks to not be able to make much money off of your music if you're trying to do it for a living, so I would encourage people to buy music straight from the artists (hint hint).

What are your next steps?
Record more albums and play more shows! We have some exciting new material that's waiting to be recorded. Hopefully I can fix up this tape machine that i inherited. I think the sound of all the drums overdriving some tape would be chill. Hopefully we'll also tour sometime once we can figure out how to get around with so many drumsets. Any ideas? University lawn drum circle national tour?

What is a drum circle?
At most Universities in the United States, it is typical to find a gathering of people in any grassy area of campus with hand drums sitting in a circle and playing beats while smoking marijuana. It is called a "drum circle." Drums Circles often have vague spiritual or religious affiliations, much like our band. I have toyed around with the idea of going on a tour and finding drum circles at Universities and setting up and playing our music. I think that it could go over well, although there would be no money involved, only chill vibes.

Luke, thanks for this interview.
You're welcome.