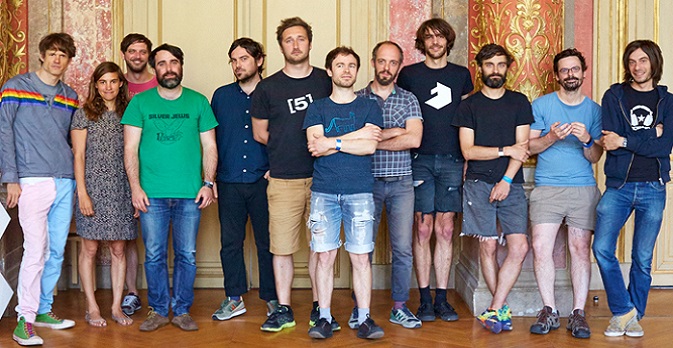 Active in the French rock circuit for over ten years, La Colonie de Vacances has earned the appreciation of critics and fans thanks to its "quadraphonic sound system, which places the audience at the center of a concert performed by four groups simultaneously". Characterized by the presence of six guitars, five voices, four drums, four synthesizers and two basses, La Colonie de Vacances debuted with the nine tracks of "ECHT", a stimulating sound exercise on the border between math-rock, polyrhythmic stratification and noise fibrillations. Below, our interview with Eric Pasquereau, one of the guitarists and singers of the transalpine ensemble. 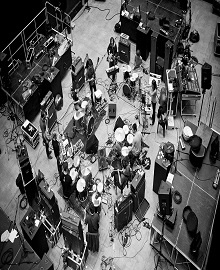 How did you come up with the idea of merging four bands into one?
It was a very slow process, PAPIER TIGRE, MARVIN, ELECTRIC ELECTRIC  & PNEU began playing around 2003-2007, and started touring around France and Europe at that time. We met each other on the road, on numerous shows. We easily became friends, sharing music and reflecting on life. In September 2010, we put together a 9 day tour around France we called: “La Colonie de Vacances” (Summer Camp in English) with all four bands playing each nights separately. It was thrilling experience for all of us, we kept many fond memories of sold out venues and bonding with the audiences. We then were offered to play one after the other a song each, in an arts festival in Tours, with 4 stages and the audience in the middle. From then on, the concept of a 360° show with a quadraphonic PA set up appeared, and we started touring that way and optimizing the set every year. Until 2019 when Emilie of Marvin and Vincent of Electric Electric left the project. La Colonie de Vacances became a full fledged band, with Julien, Rachel and Nicolas joining us and all the remains of the four orginal bands discarded for 4 new line ups on stage in 2022.

Do you have common musical influences and passions?
Passions will include almost any sonic adventure, food, natural wines, talking about metal bands of the 90’s, Tim and Eric, film, literature and probably more music.

Why did you choose to call yourself La Colonie de Vacances?
Like many decisions with this ensemble, no one really decided on the name, I can’t really remember who or why ‘La Colonie’ became the name I just know, it was the name of a tour we did in 2010, and then for some reason I ignore, it stayed and no one tried to change it. And that’s perfect. 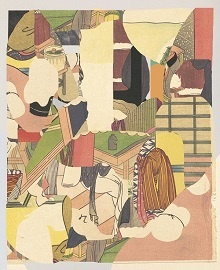 You have been active since 2010 but you have only released your first album this year. Why did you take all this time?
For a long time, it was live show, made up of mostly of the bands’ songs, then we started writing specifically for the set up and the show started evolving until 2019 when the line up changed. We wrote an entire new show with original songs and it made more sense to try and make a record so people could listen to our music on their phones.

What does the title of the album, "ECHT" mean?
"Echt" means real/really in german. It looked nice and sounded real.

What album is this: https://store.kythibong.org/album/la-colonie-de-vacances?
Yeah we released a few things along the way, a 10 “ with book illustrated by artists Marion Jdanoff, Double Bob, Quentin Faucompré and Geoffroy Pithon. A live recording with Greg Saunier from Deerhoof a 60-minute song written by him. Things that made sense at the time but weren’t fully linked to the live set we were playing. It’s a kind of hard to turn down really cool collaborations. Spontaneous is a good way to make this ensemble work.

You have been appreciated, in recent years, especially for your "quadraphonic show". What kind of wonders, in your opinion, does quadraphony hide? In the live dimension, I think there is also a kind of telepathic experience among you...
I have to imagine, I’ve been on stage this whole time. But when we gather people’s experiences they seem to mention the sonic maelstrom, the endless possibilities (polyrhythm, dynamic, orchestration…), not being told where to look, what to feel... In our live shows, the audience is in the middle for a reason, they are the main focal point, that’s where the action is. We’re just trying to play with each other and enjoy the hell of it. 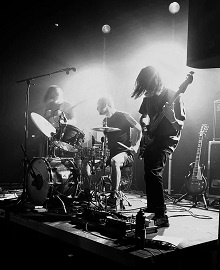 When you started, did you already have an idea of the music you wanted to play? On balance, your roots are in math-rock, even if, as is evident in "ECHT", even minimalism seems to be one of your polar stars...
The roots are in rock music and the early repertoire was a mix of all the bands songs. From 2019 and on, everyone has changed and nourished their musical tastes and practices so we are influence by many things; contemporary, electronic, traditional music but we have rock instruments (electric guitars, basses, synth, drums, vocals…) play with so it kind of narrows perfectly the many possibilities. It’s hard to talk about minimalism because we are a 12 piece band, but yeah some tracks are minimalist for sure, just maybe a slightly too minimalist.

In a piece like "L'amour universel" I hear the echo of Glenn Branca's Totalism. Is it my impression or is it one of your "hidden" influences?
I don’t think it’s a hidden influence. Glenn Branca has written a lot of piece with numerous electric guitars and we grew up on Sonic Youth so I’m not really surprised you’re mentioning him. Whether Branca is an influence on that specific song I couldn’t tell, Eric wrote that song.

I found the choice to close the album with such a particular song as "Fernweh" very effective, which in the review I described as "a lunar and polyrhythmic mix of post-punk and gloomy songwriting ancestry meloncholy". Where did the inspiration for this song come from?
“Fernweh” was mostly written by Rachel and I wrote the vocal line/lyrics, the music is written to drums bounce of each other from all four stages, same goes for the synth melodies and the guitars and basses, it took quite some time to make it work. But it’s really great way to finish the album, in a sort of soothing eerie way.  I think the song was a bit softer at the beginning and the band gave it an edge hence the post-punk feel you’re referring to. 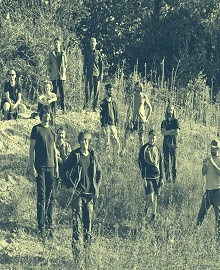 Is there a common thread running through the lyrics of "ECHT"?
The common thread through “Echt” is mostly a collage of different languages, real life stories and haikus. A lot is left dangling around, not much is assured in terms of context, there’s a lot of anxiety, alienation and absurd. It kind of hard to know where you can stand these days, so much is corrupted, therefore the lyrics try to relate to this instability, prowling like excerpts, bits and pieces of situations rather than stories.

How are your songs born?
There are 6 people who regularly write for the band, then the music is adapted to a live set up. So a lot of things can change or cannot change from the original demo to the finished album version, depending on how good/efficient the writing is in the first place. Everyone does his share of work for the band, depending on time and abilities and there’s a lot to do, recording, videos, cooking, drinking, running and trying to get paid for all this.

When will we have to wait to listen to your new album?
We are in the process of recording a new single for early 2023 with 2 new tracks. I have no idea if or when a new album will be made. Ma mi piacerebbe tanto andare a suonare la Colonie de Vacances in Italia!