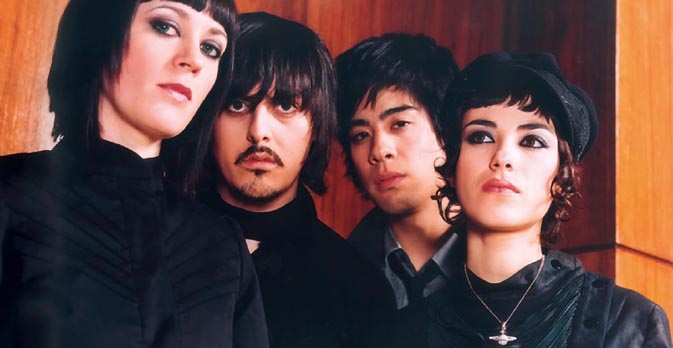 interview by Stefano Bartolotta, Marco Bercella
Tweet
With their first Best Of recently released and their fifth album already announced for next September, we emailed several questions to Ladytron. Reuben Wu's answers clearly show a band who's still not thinking about relaxing in any way, trying to give themselves a challenge every time instead.

Do you see this collection as a way to state what's the best part of your work until now? Or do you think its main use is to make people that don't know you want to listen to your music?
It's definitely a combination of the two. We wanted to express what we thought were the songs which best represented us and our growth over five albums, not just a blow- by-blow playlist of our singles over the years. You can get a playlist like that from Wikipedia. I think when you consider best songs as 'singles' then you can lose sight of the wide spectrum of music a band can write. We like the highs and lows which make a good album and I think this is no exception.

Is there a reason for the way you ordered the songs in the tracklist? Why, for example, didn't you use a chronological order?
We wanted the first track to be "Destroy everything you touch" because it was the most recognisable and probably the song with the most impact. Rather than sticking it on the end, we decided to start the album with a succession of the more immediate-sounding songs. I think when dealing with a retrospective compilation, time becomes more of a variable than a rule. Again, it comes back to building the dynamic of an album with an ebb and flow.

One of my favourite songs from you is "The way that I found you", it was released as a single too, but you don't usually play it live (I saw you four times and never heard it) and didn't include it in this collection. Do you like this song, but think the ones you perform live and included in the best of are better, or you just don't like it?
It's also one of my favourite songs. We played it live when we did our first tours in the US and Europe but it was quickly dropped from the set in favour of newer songs from the second album. For me personally it was a song I liked to listen to but not to play live. I think it lacked a certain dynamic which was needed to make a song work in our live set. It is actually included in the deluxe version of the compilation on a second disc as well as "Another breakfast with you", "Evil" and "High rise".

Generally speaking, was the songs' choice easy or did you have to face some "painful" exclusions?
It was a very difficult process at first to compile a 17 tracklist, which is already not a short playlist. In the end we decided on having a second disc which is only included in the deluxe version, which would feature the lesser known and more fan favourite tracks such as "Mu-tron" and "Versus". This second disc kind of made it alright in the end. It's a much nicer package also because of the booklet of our photographs that no one has ever seen before.

Thinking about your first ten years, is there an album, a song, or a specific moment in your career that you consider a highlight? Or do you think that every single step was important in the same way?
A few things stand out as highlights. Going to the USA to play our first proper tour in a huge sub-zero blizzard was a baptism of fire in 2002. Shooting the "Ghosts" video in the El Mirage salt flat in the Mojave Desert was an incredible experience. Playing the Sydney Opera House with Brian Eno in 2008 and playing huge live shows in places we never expected to have such a huge following, for example Russia, China, Mexico and Colombia.

In my opinion, your cleverness in switching to something different from the past in every album is very important in making your career remarkable. How much do you care about it every time you start making a new album?
One thing we avoid when making music is to delve into the past too much. We love a lot of old music but those are all just influences. From the very start we've always wanted to make new and original music without any pastiche. As a result every album sounds slightly different. It's not really a very deliberate intention to make an album sound a certain way - it seems to happen instinctively. I think there is a definite musical evolution if you listen through our five albums.

The two unreleased songs in this collection seem to move away from the dark and heavy sound of "Velocifero". Should we expect a more sunny and light sound in the new album released later this year?
"Gravity the seducer" sounds lighter in pace than "Velocifero", but it also has its own darkness. To me it sounds more spacious and brooding than "Velocifero" which was quite dynamic and frenetic in places, "Gravity the seducer" has a more expansive atmosphere.

Can you give us some details about this new album? Did you try something different in the creative process? Did you use an external producer, and if so, who?
We recorded it last year in Kent at Barney's studio (Barney worked on "Witching hour"). The difference here was that we had quite a lot of time and space to write and produce this album whereas the previous album we were taking breaks from tour to write and then moving to a studio to produce straight after a world tour. We worked with Barney and Alessandro Cortini, who worked on the last record.

What about live shows? Are you still going to tour what a bass player and a drummer? Did you plan to tour extensively all over the world as usual?
Yes we'll be playing shows in lots of interesting places this year. Can't wait.

Synth based pop music is very popular today. How proud do you feel thinking that when you started, a few people was interested in it?
It hasn't changed us much but it's definitely made us feel like we've earned the position we are in twelve years down the line. When we first started making music, it was sometimes very frustrating not only dealing with old analogue equipment but also computer software which constantly crashed on slow computers. It's taken for granted now that music can be made straight out of the box when you buy a computer. Also it's so widely accepted as normal to make synth music now. We remember having to defend ourselves when we were asked why on earth we were using these old keyboards.

Do you see some creativity in the new artists making this kind of music? Or do you think that everyone is simply following the trend without showing any new idea?
Both hahaha. It's all about the music. A synthesizer is nothing without a song.

You are one of the few long career bands without any side project by one of the members. Is someone form you planning a side project, or will the four of you have time only for Ladytron?
We're working with other artists more now - in writing and production. There will probably be more side-project material happening in the near future. For me, apart from music, I'm doing more and more photography work. I definitely see it as not just working within the limits of music.