Feelings from a time lost

Let's start from the beginning: how's been your musical formation and training? How did you get started to play piano?

I started making music very late. Somewhere around the age of 22 and I started playing the piano one year after that, when I formed Library Tapes with Per Jardsell and using his piano.

How did you get the idea to blend minimal piano compositions and electronics?

It was just something that came naturally after Per left the band. We had been working  with field recordings and computer on the first album and I wanted to explore that even more on "Feelings for something lost".

Library Tapes is the first of your projects, even if it starter as a duo with Per Jardsell. Can you tell us why he left it? And what has changed since you starter making music only on your own?

Per left halfway through the recording of "Feelings for something lost" for studies in Stockholm, so he didn't really have any time over for the music anymore.

Library Tapes first two albums' titles evoked a very precise atmosphere and mood. Did you really want to express that kind of negative and lonesome feelings? Do you think that your music can express only depressive feelings or there is also some hope and serenity into it?

I think the titles and the music reflects how both me and Per was feeling at the time when we recorded the two first albums. For me, the new album and the two previous one's have songs with more hope, however I've read reviews saying "A summer beneath the trees" is a sad album. I don't agree to that really.

From the "piano-glitch" of the first albums to more complex arrangements (e.g. in "A Summer Beneath The Trees") and to the electronic patterns of some of your last records: has there been some kind of evolution in the way you approach composition? Maybe are you looking for something different than before?
I think most artists who record a new album want to make something different than the last one they released. It's more interesting both for yourself as an artist and for the people who listens to your music of course.

Library Tapes, David Wenngren, Xeltrei, Forestflies, Le Lendemain, Murralin Lane... you have published records under many different denominations: what's the reason why you need to differentiate the music you release? And what are the elements upon you choose the name under which a composition will be published?

Library Tapes is a project where I decide everything that will be on the recordings but it's also a project I work with different people so it's not something I'd feel comfortable to do under my own name. Instead I used the name Forestflies for my solo work with a couple of cd-r releases. When it was time to release "Sleepless nights" I felt it was time to start using my own name instead for music I've created on my own.

Xeltrei e Forestflies are inactive from some time: are they interrupted projects or do you think you can go back to any of them?

No, there won't be any more Xeltrei and Forestflies releases.

Even if all of your projects are mostly made only by you, you had some collaborations with other artists. In particular, I found very interesting when you played with Danny Norbury, first in Library Tapes and then in Le Lendemain. How's been working with him?

Danny is one of the most talented people I know and I love everything he create so it's very simple to work with him so I wanted to do an album with full collaboration instead him just adding cello to a few of my songs.

Generally speaking, what experience did you get from all of your collaborations? And is there any other artists you'd like to play with in the future?

You always learn and get inspired by working with other great musicians. I'm working on a couple of projects at the moment with artists I love. There's so many great artists out there who I'd love to work with. It's too hard to pick just one. The main problem about working with great artists is that they always tend to be busy with other things.

In your compositions piano and strings usually meet electronica, samples, field recordings: apparently, the meeting of two different musical worlds. What do you think of the employ of technology in making music?

For me, when mixing different things that's when you get something really interesting. Testing new things and trying to push the boundaries is very important.

What do you think about the definition "modern classical"? Can it describe your music somehow?

I don't know. I guess so. I'm not really interested in putting a label on what I do. Most of the interesting stuff is hard to pin down in just one genre I think. And while classing my music as modern classical won't be entirely wrong it's not entirely right either.

The music you usually listen to is mainly focused on experimental and..."modern classical" or do you like to cross different genres? Can you mention some of the contemporary artists you like better?

I listen to lots of different genres. I would get really bored just listening to one type of music. As for contemporary artists... Julianna Barwick is one I'm loving a lot at the moment.

What's your ideal mood and condition for composing? Does it depend on your feelings at the moment or are your tracks born in a more studied and technical way?

It goes in periods. I have periods when I feel very inspired and during these periods I tend to create a lot of music and then I can go a month or 2 when I don't do any new music at all.

You usually write, compose and record all on your own. What's the difference from recording in studio or having a different producer?

The freedom to be able to record whenever I want is the best about it. I think I'm more open to trying new things, exploring stuff in the safety of my home than I would be with a producer in a studio. I guess that depends on who you're working with though.

You're a very prolific artist, where does your urgency to compose music come from? And, generally speaking, do you think that the fact that experimental and electronic artists are more prolific means their music is "easier" to make than, e.g., an album of songs?

I don't know where it comes from, it's just something I feel the need to do. It's not something I think too much about.

Making an album is not hard for anyone and can be done very quickly. Making a great album is hard for most people in every type of genre and will normally take some time. Of course there are exceptions, both for people who make modern classical and for people who's doing pop music.

Talking about "songs", Murralin Lane's "Our House Is On The Wall" is your first record featuring some vocals. How's been writing some lyrics for the first time? Do you think you'll make more "songs"?
I didn't write the lyrics for the Murralin Lane album. Ylva Wiklund did take care of that. Hopefully we can make more albums together. It was really fun to work on something that's so different from my other music.

Besides all of your projects, you recently created your own label, Auetic. Did you feel you really needed to create something on your own in these years' difficult recording market?

For me it's very important to have my label as I'm doing music for a living. Having your own label means a little bit more work but it also means a lot more money if you release your own music and are able to sell some cd's. It will be very interesting to see how the new album will do sales wise. People really need to start paying for the music they are listening to. The illegal downloading is hurting not only the major labels as some people seem to think, but also smaller labels and artists as myself and lots of my friends.

I found the idea of the "subscription" for the forthcoming Library Tapes album very peculiar and interesting. Did you have good responses to this challenge? Do you think this can be a good way to collect fund for releasing records?

It's not really that strange. It's been like a way too long pre-order. I knew I was going to put the album out, just not when. I started taking the first orders in April and the album will be released October 18th, so some people have been waiting for almost 6 months to get their copy. A huge sum of money was taken from me while I was on tour in April, so I had to do it this way to fund the release as I'm putting it out on my own label

You offered a preview track from "Like Green Grass Against A Blue Sky" to our free download compilation OndaDrops Vol.2. What do you think about the current music circulation and availability? Has the spreading of download changed music fruition?

Internet is a great tool to promote and spread the word about your music but as I said before the illegal downloading is hurting artists so much at the moment. Something's got to change.

"Like Grass Straws Against A Blue Sky" is being released after about two years after the previous Library Tapes album: would you introduce the new album, explaining why it took more time than usual?

I wanted to take a lot of time with this album to be able to gather the best songs as possible for it. I also had a lot of other stuff going on last year with the releases of Le Lendemain, My solo album and also re-releasing the two first Library Tapes albums on my own label along with Annelies Monseré's new album

Lastly, what can we expect from you in the near future, and what do you expect from music?

Hopefully I'll be touring a lot with Library Tapes and Murralin Lane. I'm sure next year will be even more busy than this year with various collaboration albums and maybe one or two solo releases. 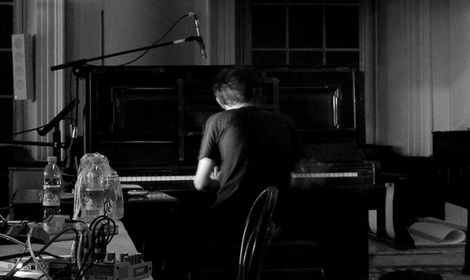 A Summer Beneath The Trees