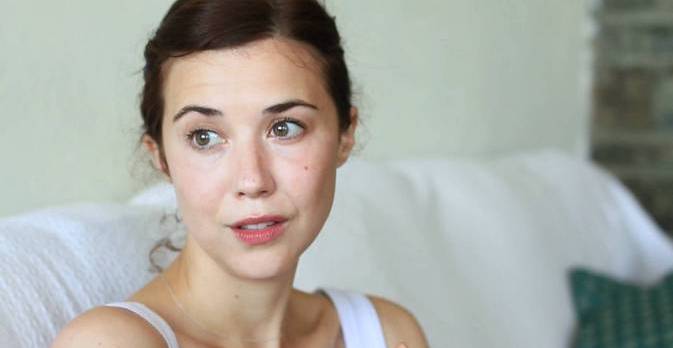 One month ather the release of her third album, Lisa Hannigan came to Milan for some promotional activities, and he had the pleasure to meet her. Her answers are a privileged point of view on all the stands behind the making of this return, from the close collaboration with Aaron Dessner to the importance of never separate the technical side from the human and emotional one.

Last time I saw you on stage was in Milan, when you were touring with Glen Hansard. I think there was really a special chemistry between Glen and you on stage, so I know that now you both had had a solo record and tour to do, but I was wondering if there’s the idea to put this chemistry in some recordings in the future.
Oh, I don’t know. Glen is the first person that I saw that made me think that I could actually wanted to be a singer on stage and sing my own songs. I loved singing and always wanted to be a singer for years, but then I went to see Glen and The Frames in Vicar Street in Dublin, and he’s just sooo cool! It was the coolest thing I ever saw in my life. I remember during the gig, he had an harmonica and he dropped it into a full pint of Guinness, and he just drank it! I never saw such a passion in anything before and it was so amazing for me. Then, after a lot of other things, it was great supporting him on tour and watching him every night. We actually recorded together various things over the years, but I’m always up to recording with him, he’s one of my favourites and he’s such a lovely person. It’s always nice to see him.

About the sound of your three records, if I think of the mone after the other, I think there is a path, the second album starts from what you did on the first but then you did something different and in this one, there is something that comes from the previous one  and then there’s something different.
I think you’re right, and maybe this path can really go on. This record has something particular on it, but in general, I feel that it’s about the process of performing and feeling more comfortble with it, and also be more honest with yourself. Maybe, on the first one I almost felt embarassed about being so honest, but then it gets easier, also thanks to being on tour, and this record feels very personal, I mean, they’re always personal, but now I’m a lot older and everybody has a change over those many years. There’s a lot of darker things on this record, as you get older, different things become part of your life and I think it’s a mix of all of those things.

Talking about the stories you tell on this album, I read on the press release that “Prayer For The Dying” is dedicated to a relative of a friend of yours that sadly passed away. Buti f you listen to the words or read them, you can’t understand who this songi s for. Are there other lyrics that have stories behind them?
All of the songs are personal, they are about difficult situations, that song is very obviously so, but they all come from something, do you want me to tell you about one song in particular?

Yes, I had planned to tell you that usually I ask the artist about my favourite song on the album, but this time I couldn’t find a favourite song, so maybe there is one song you would like to talk about.
I think the most important song on the album, also because of the work Aaron Dessner made on it, is “Ora”. I was not sure of what was about to happen in my life, I was afraid that terrible times were going to come, and I received an email from him where he said do you want to write together, and I said of course. So he sent me his music, it was four minutes long, and I recorded myself when I was at home, then I stopped to do something else, like the washings, then I was singing along and recording. I remember with “Ora”, I was in London but I was missing home. I had reasons to be there, but I remember singing on “Ora” “I’m going home, I’m going home”, and I felt I was being adrift, being lost, like when you are facing something bigger than yourself. That songi s so immediate and so easy, and I still feel it’s very important for the record and for the times when the record was in the making. There’s a lot of elements in it, and words are very personal, and all the sound textures, I feel it’s a very important song for me.

You just gave me an examples on how you start writing a song, but I was wondering, do you ever start simply from a melody?
No, I never do that. I just spend some time mumbling around until I have a line, and there’s always the melody and lyrics together. For this album, when I was sending what I wrote to Aaron, he alwasy responded in a good way, so, for example, I didn’t have to worry that I’m not particularly good as a guitar player.

And then I read that you recorded the record in seven days.
Well, I did my bits in seven days, me and Aaron and a bass player and a piano player, in New York in this beautiful church, but then, I went home and then Aaron was working on hundreds of records, I think he was working on eight different record, I remember one of them was from Frightened Rabbit. So, if he had a day off, he called some friends to play on my record, so it took a couple of months to do what was needed, all the textures, and then he sent me emails saying “what do you think of this?” and I was alwasy like “it sounds amazing, thank you!” and I was getting all of these bits in my inbox with some distance, which was good, so I could listen very carefully. In the end, it took some months to develop.

We talked about the sound building of the album, but I also feel that there are some new things on how you used your voice on it.
Yes, I feel like I’m first of all a singer, and over the years, I really wanted to use my voice as an instrument. On “Prayer For The Dying”, for example, I feel I sang in a different way than before. Also confidence is important for it, now I feel I can really use my voice as an instrument and I think I did it on that song, considering how powerful it was.  Also on “Lo”, there are different voice layers, and the highs go really well together with the strings. So, for me vocals are first and foremost an emotional connection, but I also like to think about them as a physical sound, a texture.

I was also about to ask you another thing, but I don’t know if it’s more an Aaron competence rather than yours. I noticed a very in-deep work about rhythm on the album, and maybe you want to tell me something about that.
A very important person for that is Ross Turner, an Irishman, he is amazing and very creative. There are a lot of musicians interacting on this record and I can’t say it’s me, I’m not very good at that. The bass player made so many great choices, and Aaron too of course. So this is all on the musicians.

On this album there is not a singalong moment as “Knots”, for example. Do you feel that in the future you might have another song like that?
Yes, I’m sure. I think, with this record there was not the feel for a song like that, but I’m sure I’ll write a song like that again. Maybe on the next record all of the songs will be like that, who knows.

It’s a common opinion that you may like a record in a different way depending on how and where you listen to it. I was never completely sonvinced about that, but listening to your record in different situations, I felt that when I was lying on my bed, in my room, alone, in the evening, I caught up much better with the album. Do you feel that there is an ideal situation to listen to it?
I feel that this album will suit perfectly with November. Now it’s so hot and I feel it’s gonna work better when it’s cold and snowing. A lot of my favourite song are actually connected to moments like watching the sun come up, or being at home by yourself, but also driving might be a good moment to listen to the record.

You are playing live in Milan at the end of October, what can we expect?
Lots of new songs and lots of old songs. The band is slightly different than the previous tour, there’s more piano and more synth, and there’s an American singer, Heather Woods Broderick, who is supporting and we are also singing together, she just has this amazing voice, so there will be lots of harmonies, lots of jumping around, I just can’t wait.