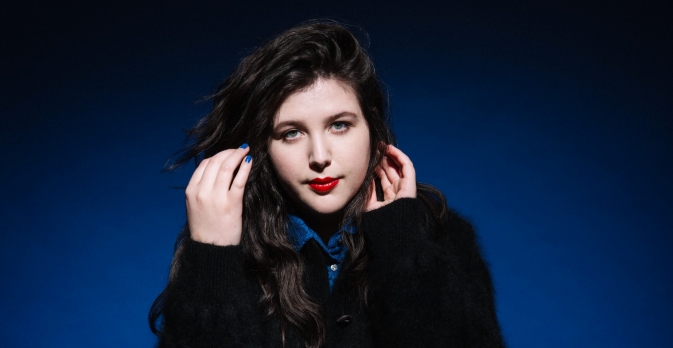 Hey Lucy, how are you? Let’s begin this interview with a question about the title of your new album. Why did you choose ‘Home Video’? What does it mean for you?

So, my dad took like hundreds of hours of home video when I was growing up. I have been watching them my all life and I think they really informed me in terms like how I remember things. If something happens in my life that I want to remember, I have to document it in order to actually remember it. I have all these journals, I do photography sometimes, I went to film school thinking that I would make films and now I do music. I feel that everything that I make is connected to his impulses he taught me to just capture everything. So yeah, I thought that making this album, which is me capturing these moments from my life, would be like a continuation of his efforts.

In Home Video, you sing about your teenage years. Starting from the first line of the album – which is ‘Being back here makes me hot in the face’ – it feels like you came back to your origin, both physically and temporally. Did you feel the need to restart from the past in order to move forward?

Yeah, I think I did. It’s actually part of why I move out of Richmond, where I grow up. I think I was starting to confuse myself with Richmond itself. I didn’t know where I stopped, and where Richmond began. I didn’t feel the past was actually in the past. I felt I was still reliving my life over and over. So, yeah, I think that making this album was part of an effort to let the past be the past.

Your previous record is called Historian and the new one focuses on the past too. I think it finds itself in a constant conversation between the present and the past. Why is the past such an important theme in your music?

The past is curation. It’s all editing that we are doing in the present. There is so much of it that you can’t take it all with you. You can’t remember it all. You have to choose what lessons are actually worth forming the future and, I think, without the past how we are supposed to learn anything. I mean… I guess we haven’t really learnt from the past. We are still making the same mistakes over and over. But, on a personal level, if I can remember when I felt good, I am going to try to follow that in my life. And if I remember when I felt hurt, I can stay away from the type of people that hurt me.

Do you still journal so much?

Not as much as I used to. I used to journal like every single day. Now I journal like once a week, maybe once every two weeks. But I can’t stop. I feel that I have to do it in order to feel that stuffs happened.

Do you have any recent recurring thoughts, which you feel sharing with us today?

I have been thinking about the people what wrote hymns. We don’t remember them, but we remember their songs. And that is such an amazing thing to be able to write a song that outlives you. I don’t know if my songs will ever be that way, but it would be so cool if any of my songs existed without me and the people were like ‘oh yeah, who cares about who wrote it, the song has its own life’.

It was by chance, but I like that you pointed out that they are topics of love. I was recently thinking that I have never written a love song. I wrote a breakup song, I have written songs about loving my friends and my family or trying to love myself, but I still feel that I haven’t written that many love songs. But I think you are right: almost every song is a love song if you think about it. Yeah, I didn’t try to write about my teenage relationships, but I guess is just what I was working through.

Musicians are usually asked what musical influence they have, but in your case, I can't help but think about which poetry or narrative works might have influenced your writing. Are there any readings that are in some ways important and formative to you?

Oh yeah, I’m like always reading things. Let me think what a good answer could be. Yeah, I don’t if they are overrated for you, but Elena Ferrante’s The Neapolitans Novels. I like that depiction of a female friendship from the very beginning through their lives and how it has been really intense and complicated. And I felt that this is how friendships are and female friendships. I think there is a lot out there that make seem that they are vapid or just “simply happy”. I learn a lot from that. Ehm, what else? The Fire Next Time by James Baldwin was a huge deal for me. James Baldwin in general I think is maybe the best writer who ever lived.

What did you read while you were making the songs from Home Video?

Well, it was over two years, so I read a lot… There is this music writer and poet Hanif Abdurraqib – I don’t know if you know of him. He lives in Columbus, Ohio and he has some poetry books and also some essays and music writing books. They are very personal. He had this essay, called Brief Notes On Staying, that was about a friend of his who took his life and that really affected the song ‘Please Stay’. There is another book called A Little Life by Hanya Yanagihara. There is a line in her book that is actually the last line of the whole record in ‘Triple Dog Dare’ [Nothing worse could happen now].

Let’s now talk about your future! Are you happy and ready to be touring again?

Oh my gosh, I’m so excited. I wanna do shows so bad and I am seeing all this sold out shows. I think these would be the most cathartic shows ever. And I love my band so much and, yeah, I’m going to be so emotional the all the time… I think I am probably going to cry a lot, but I look forward to it.

And you have a long tour ahead…

Are you going to play new songs live?

I like to play one song that isn’t out yet, because it feels like a special thing for the people who show up. So yeah, I haven’t chosen what one, but I have plenty now.

For a couple of nights, you will share the stage with your friend Julien Baker in Richmond. Are you maybe planning something special together on stage?

Yeah, I think I have a song that talks about Richmond. That would be a good place to play it!

You wrote your new record almost two years ago in a completely different world. Do you think that now these songs have somehow acquired new meanings?

I think the answer is actually no, just because these songs are about the past. So, it’s like they weren’t about the present moment while I was making them either. I think they kind of remain and that’s almost what’s eerie about them. I made them before George Floyd was killed and I made them before lockdown and before all these catastrophes the word is gone through since. And yet they seem unchanged and that just like how the past is… I mean, how could we ever have known? I sat on them for so long, but they are a part of my past now. I know they just came out, but for me it feels like they are in my past.

So, are you looking forward for doing new things?

Thank you very much for your music and your time.