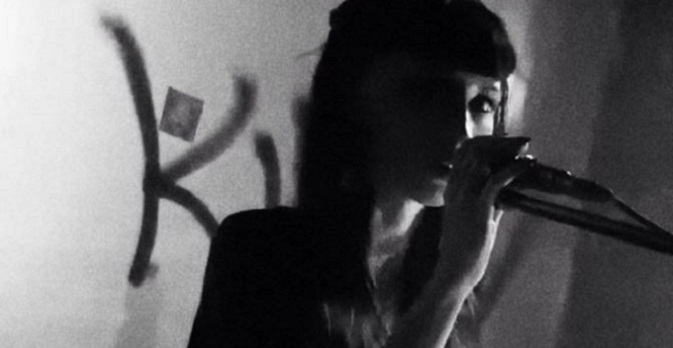 Even if the increasing gentrification process is unfortunately changing Berlin, it is still the european capital city of electronic music, giving space and ideas to new talents. One you probably haven't heard about yet is Marta Raya, synth musician, singer and song-writer, emerging in the goth scene of Germany. She has arrived from Poland to the right place and her debut album shows she is growing up as an artist in an ideal context. “Hidden emotions” was out on may 2018 and impresses for its addictive tune, dreamy soundscapes and melancholic atmosphere.
A charming dark lady with long black hair and egyptian eye style: the look reflects the obscure and mysterious content of her music. Thank you for having accepted to be interviewed. Would you like to introduce yourself?
Hello Paola, it’s my pleasure! I originally come from Poland. Well, I’m actually half polish from my dad’s side and half russian from my mom’s side, but before I moved to Berlin I was living in Poland and maybe one thing to add - my real name is not Marta Raya, it’s just the artist name. I'm telling you this as many people kept on asking me if I have some Spanish origin.

How did you start as a musician and your solo project?
Since I was a kid I was very much into music and I always kept saying as a child that when I grow up I wanna be a singer. So well, this dream came true in 2011. Shortly after I moved to Berlin my friends and I started a dark punk band, Tanzkommando Untergang, where I was the singer. We released one split LP with a Polish post-punk band, Wieże Fabryk. We existed around two years I think.. After the band's split-up I started another project with a friend, Daria. It was called Monowelt. This time the music went into more dark wave direction. We also released an LP and were active about 4 years. My solo project started after Monowelt disbanded, so I officially announced “Marta Raya” at the beginning of 2018, but I started writing songs alone in 2016. Most of the songs on my first album are actually “first takes”. They were taken from my home-jamming sessions, during which I was not even that aware if I wanted to release them one day. Therefore most of the songs are so long. It was the result of jamming. I decided not to change them too much or cut their length because I really liked the idea of keeping the “initial version”. How is it to live in Berlin as a musician?
To live in Berlin as a musician has quite advantages, I must say. Especially because the alternative scene here is pretty strong. So if it comes to playing live you have plenty of possibilities. There are many venues and several events, where such music as darkwave or post-punk are very welcome and there is always enough audience for this kind of music. Also I think that Berlin is still a very “artist-friendly” place to live. If you are an artist, it doesn’t matter if musician or painter, photographer, etc. I feel you can be understood here more than in any other place, where the artistic culture is not that strong. So at least you don’t feel here like a freak being an artist. Berlin loves art of any kind and I hope this will never change here.

Let's talk about your debut album: which are the lyrical themes and how would you describe your music?
The lyrical themes of my first album are… hidden emotions. Well, I sing there mostly about my inner world, about things that evoke strong emotions in me. From difficulties in human relations, melancholic and depressive moods to dreaming and craving for untouchable things, inner obsessions, nature and our planet.. It really depends on the song. I would say that my lyrics are quite personal on one hand, but on the another anyone could feel that way too, so I hope some people can also relate to certain themes I speak about in my songs. Musically it is for me a personal reflection of my own self. From dreamy and romantic moods, through rage and strong emotions into my world of melancholy and eerie soundscapes. I call it “wave triste”, I think this term fits well. There is also a bit of a theatralic touch to it. I love the theatrical part of darkwave/goth music. You can also feel it in some of my songs. But in general it’s so hard to describe your own music in words. Especially that I don’t have any particular concept or vision in my mind when I create music, it just happens naturally.

Which bands and what kind of culture influenced your production?
There are a hell lot of bands that influenced me and many different genres actually. I got into alternative music at a quite early age, and I was listening to everything starting from grunge and hardrock, through metal, punk, reggae, ska, rock’n’roll, rocksteady... and then I got into goth. So also post-punk, synth- and darkwave, NDW, minimalwave, EBM and new beat and... and... and... I think all these music genres had an impact on me. Even though my music can be described as darkwave, my influences are very varied, even if you can’t hear any reggae influence in my music. But all these genres were an influence, indeed. It’s not only about inspiring me musically but it is something beyond - some bands can encourage you mentally to do something. Sometimes it is also about attitude, not only about music. An example here for me is The Clash.  Still one of my favourite bands of all times. I was not inspired musically by them but more on this mental level. I don’t know how to put it in words. I just saw some of their live shows on TV back those days and thought : “okay, I must do it to. I want to be on stage. I wanna make music and freak out on stage like Joe Strummer!”. Well, that’s more or less what I meant. At the moment I listen to a lot of 70’s rock music at home. My boyfriend is not very happy about it (laughs). About a year after the release of your album, you joined the italian band Dystopian Society as keyboard player and were present at the well known Wave Gothic Treffen, the biggest goth music festival in the world: how is it to work with this band and how was your experience at the festival?
It’s fun to be in the band again! I enjoy my role here as a keyboard player and not being the one in the front all the time. I think it’s a good balance - I have my solo project, where I’m the main person. Well, the only person on stage (sorride) and where I do everything, play and sing, do the show and write music completely by myself, whereas in Dystopian Society I contribute just with my synth parts and I am one of the four musicians on stage. I also enjoy the fact that my music solo differs to the one of Dystopian Society, so in this way I have a chance to play in two completely different styles. Besides, playing with friends is much fun too. I know Sara and Max already since 2011, so it was not like joining completely a new bunch of people, which I think made the decision to join the band easier for me. About the WGT - it was a good experience. I thought first I would have been nervous like hell to perform there, as, you know , everbody says like: “Wow! WGT is a big thing!”. But to be honest for me it was not different than to play in any small club. The general atmosphere on stage as well as behind it was very relaxed and friendly. I’m just glad the band had the chance to play for a bigger audience. So yes, it was definitely a good experience.

What are your future projects and can we expect a new album soon?
I think so far I will concentrate on my solo project and my part in Dystopian Society. Apart from this I lately did some collaborations with a few musicians as guest singer, but I would like to take my time now to concentrate on my second release. So yes, to answer your question, there will be a second album coming up. I am working on the new songs, but since I was busy playing live quite often lately, I couldn’t take time to finish them. I hope to catch up with that in the coming months. So stay tuned, soon you will be able to hear some more of my wave triste with a bit of dramatic and theatrical touch (smiles).