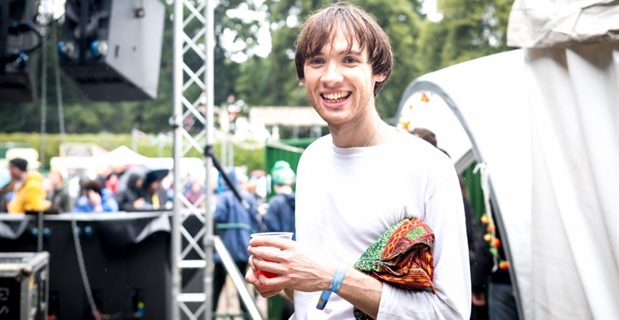 Roman holidays for a Welsh dandy

I wanted to thank you, first of all, for your new album. It’s been some time that I could listen to an album for which I couldn’t tell which song would be the next single, if you get my meaning. I read other important reviews stating the “classic” nature of “2013”. Which I guess you can interpret both as a quality mark but also as a description of the sound and mood of the album. Does this flatter you and was it your precise intention to create a “new classic”?
It wasn't my intention to make a classic album, quite to the opposite.  My only intention was not to intentionally do anything other than do what came out. All my favourite symphonies and albums are odd, but the more you listen you become familiar with them, and they stop becoming odd, are comforting, but never cease to be surprising.
I'm not the best one to see what I have made, only what I intended to try to do.

“2013”, to me, really sounds like something a British artist would write in the Italian leg of his grand tour. It is flamboyant and ironic, delicate and bold, classy and popular, free and classic at the same time. Were you more afraid or more fascinated by falling in that cliché (not in a bad way per se), when writing the album?
I was't scared, because I had no critical audience in mind, only myself and my heroes.Byron lead the way, and on the surface he was an English adventurer on a grande tour, but in reality he listened to the places he went, and let them speak to him, as much as he spoke of them, i think, so there is a great sensitivity in travelling that can be seen as an arrogant English kind of travelling, especially of that period.I did't paticulary travel around, more went to be in one place just Rome.

Did you also make your acquaintance with the Renaissance-style instruments (dulcimer, flute) and songwriting in Rome, or is it a previous fixation?
I did, I used recorders and harpsichord, theorbo and Positive organ. Baroque violins and modern, half and half, it was fun.I discovered these instruments through friends studying early music, and through Monteverdi.

Your songs and your vocal performances made me think about a lot of British songwriters, but if you had to point at your personal monolith, what would that be (either an album or an artist/band)?
Kate Bush, "The Dreaming", yes. Alec Chilton too.

When I hear these beautiful arrangements, this richness of sound you worked on and put in this album, I’m always afraid, especially nowadays, that it will be extremely hard to hear the songs live as they are. What is your current live line-up? Do you play a “rock” or a stripped-down set?
I'm never concerned about recreating the Album, I remember going to see Muse and they sounded like the record, and it was boring.The feeling, energy and something deep in the song is what I chase, with any arrangement of it.
Certain instruments are necessary for some songs for the character. So live I play with a band, there are some songs I might not be able to do without the full ensemble though.

I liked your reflection on today’s relationship with art, the irreverence you read in the attitude of Italian people towards art (which we mainly refer to as carelessness, though), that you make in the single “How To Recognise A Work Of Art”. Can you elaborate a bit more on that, especially on the musical side?
This Museum attitude towards music and art is dull and lifeless, I respect people who live in the time they are in, and see value in the inner meaning rather than always the artefact. For example in the Renaissance paintings told stories, and sculptures described gods, who were full of contradictions, but were heroes.
Many people are obsessed by the biography of the artist, the hand of the artist rather than the artist being a vessel for the art, which is the way i'd like to think.The artist is below what he or she creates, and it should benefit people maybe.

In this record your songs show a wholly different sound from your outputs with Race Horses and Radio Luxembourg. Also I guess it took some time to record it, or at least some of the songs were written a few years ago. How did your ideas develop during these years and who were the people involved in playing and designing the record?
Iwan Morgan produced the Album with me, and he was patient and very close in the whole process, we discussed a lot, and his spirit of adventure and kindness went to give the right space for the music to come out. Jimmy Robertson, recorded it, and is incredible, the sound was just what I was after, and it was natural, and easy, not too much communication needed.
I worked with new musicians, Valentina on Drums, who is a great drummer, Lucy Mercer from Stealing Sheep, and Euan Hinshelwood from Young Husband, among others. Great violinist and musicians, and Daniel Bradley on drums and percussion who was in Race Horses with me, was a great player on all the songs and music.

Euros Childs was a big sponsor of yours when you were in Race Horses. Do you know what he thinks of this solo debut?
I love Euros' music, always what he does, and he is always supportive. I hope to do another Cousins record with him, our collaborative duo together.

Can you tell us if you have any plans for gigs outside the Uk, maybe coming back to Italy at some stage? Thank you very much for your time.
I will be supporting a good friend of mine, Elton John, at the Colosseo in 2043!Haha. I hope this autumn, or soon!