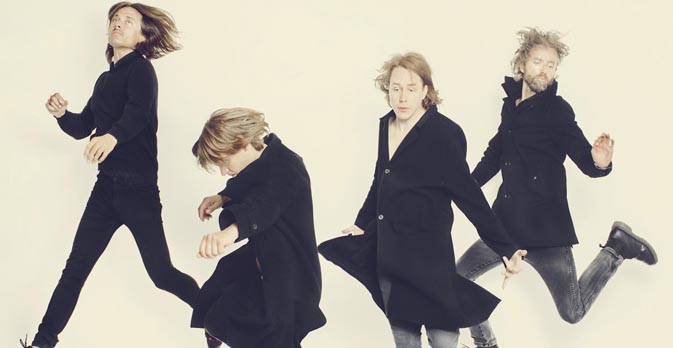 After six years, Mew are back with a new album called "+-". So we asked the singer Jonas Bjerre a few question by mail. Here they are!

So, let’s start with some routine questions first.
You kept us waiting quite a long time! How come? And, how much of this time was actually spent writing and how much charging your batteries, just resting?
Yeah I know. Well, it was never something we wanted to happen, we wanted to put out an album much sooner, but due to a wide range of reasons it just took a long time.
Firstly, we toured a lot on the last album, about a year and a half, and then another six months on/off. After this we were a bit tired, and we agreed to take a little break from the band, spend some time at home. And we each individually worked on different creative things, outside the band, which I think was a great experience for all of us, and gave us some perspective to bring back into the band.
Then we went away on a little trip and started writing new songs, but it felt a bit the same as doing the last album, and we wanted it to have a new sound, a new approach to our songwriting. And it just was hard to do, the three of us, felt like the “No More Stories” album was as far as we could take things as a 3-piece. So then when our producer Michael Beinhorn came over to listen to us play, he immediately suggested that we get Johan (Wohlert, the bass player, ndr) into the writing sessions, and then quickly things got more of a direction and focus, and pretty soon it was just like he never left. So there was a lot going on during the making of the album. We also toured a bit in-between which was great, because we got to try out some of the new songs in front of an audience, and that gave us a much more objective perspective on them, and they really benefitted from that.

What’s the concept behind “+-“ name and album cover?
The name is short, and we wanted a short name this time. We like to do the opposite of what we did the last time, I guess. Mathias from m/m (Paris) who created the artwork suggested that the album felt a bit like a battery, I think he meant it kind of charges you when you listen to it. That made us think of the polar opposites present on the album, and the contrast of elements. It just felt really fitting. The cover was made by m/m (Paris) but incorporates these 4 egg characters created by Hyunji Choi in Korea. To me the cover is colorful and complex, and has many layers you can look into, which also is very fitting for the music on the album.

Did you start writing this album with guidelines, some sounds in your head you wanted to get, or was it all spontaneous?
It was pretty spontaneous, actually. We've done very idea-based albums before, but I think we all wanted this one to be more in control of itself, rather than us trying to get all the songs to fit a certain mood or sonic texture. We just listened to what came out of our heads, and we let each song be what it wanted to be. So that was a bit liberating in itself. I think it shines through a lot, when you listen to the songs.

Did you have a usual songwriting process or it changed from song to song?
On each album we've done it's been a mixture of processes. Most of our songs we discover together, just playing together, suddenly something happens and that's how the songs take shape. But there are always a few songs that start with one person bringing something into the writing session, either just an idea about a specific way to create something, or maybe just a few parts to start us off.

Ok now some more “introspective” questions
Introspection is a fave !

How you’d describe “+-“ compared to your previous works? When you listen to them now, what does it feels like?
To me each album represents a time in our lives, and the things we were going through at the time, both creatively and personally. It's very hard for me to be objective, because there is so much of ourselves invested in each album. They just are what they are, kind of documenting who we were. They are our history, and I can only hope they are a little part of other people's history too. I think that's the most you can aspire to as a band.

How much are you bond to your country? Do you find more inspiration in your own land or by traveling around?
We've spent a lot of time in other countries; we lived in London for years, and have had long periods staying in Los Angeles and New York. I love traveling, and experiencing new places, but we are now all based in Copenhagen, where we're from, and for now that fits everyone really well. In a sense, it doesn't matter much where you stay in our line of work, because most of the work takes place away from home anyway. But I think it feels good to have a place that feels like a base. Travel is definitely a big inspiration though, thankfully we do a lot of that. I think there is a sense of melancholy in Nordic culture, which permeates a lot of the art that comes out of Scandinavia. I guess we are no exception to that.

Was there a moment when you told yourself something like: “Wow, we’re kinda famous, world famous!”?
Ha! I don't know about that, but definitely there’s moments of realization, like our band really made it far. And that so many people appreciate what we do, that's such a gift, such a privilege, and seriously I feel grateful for that every day. It all happens in steps, some of them leaps. I distinctly remember the first time we heard one of our songs on the radio, we were quite young, and it was a demo being played on Danish radio. That was such a rush. Next thing you know, we're playing big festivals… in some ways I still don't quite understand it.

Let’s finish with current and future events.
I read in your bio that a crucial event in your life as musicians was attending a My Bloody Valentine concert. What do you think of their comeback, and more generally, what do you think about the shoegaze revival?
I think '“m b v” is a great album, but to me it will never have the impact of "Isn't Anything" and “Lovelesess”. Because those albums provided the scenery for a lot of my teenage years, and changed how I thought about music. I was not aware there is a shoegaze revival? I am quite interested though, in the likenesses between some of the new doom metal and shoegaze. I really enjoy that.
When you're a kid your mind is like a book full of blank pages, and you are open to all kinds of new things. We used to try to condition ourselves, listen to lots of weird stuff, just to see how it would affect our creativity. I think that's important to do, always, to challenge yourself a bit. A lot of people, when they grow up, they just want things to be immediately pleasing. But listening to music, experiencing art, has a lot to do with learning new things too. Some things you need to spend time with, before you can fully enjoy them. And it's not difficult, it's not hard work, it just requires an open mind. Maybe I need to listen to 'm b v' again, with that open mind. Maybe it will eventually become better in my ears, than their previous albums.

Can you recommend us some cool fresh music from Denmark?
I would recommend Silo, who just put out a new album. They use guitars, but it's not like guitar music. It's got these lilting grooves. Really amazing. And I sing on one of the songs, ha !
Also, Communions, a very young band from here with a great sense of melody. Shiny Darkly, another great young band, a bit darker (as you could guess from the name), as well as Lust For Youth, who make these really catchy pop tunes, but has a sense of despair to them as well, it's really beautiful. I just saw them live in Tokyo, it was a great show. Also, Pre-Be-Un, who are really a cool pop band, but with some very strange ideas. And Kala-Ok, a Danish/Chinese group, it's very artful and full of heartbreaking beauty.

We’ll see you playing live in Italy next month. Can’t wait by the way! Do you want to disclose something about the show?
It's gonna be our first show in Italy in a long long time! I can't wait! I love Italy, I traveled around there a lot when I was a kid, and it always bothered me that we didn't play more shows there. We gotta change that, right? There's gonna be old and new songs, and we're working on a really cool thing to bring, of which I cannot reveal too much yet…

And The Glass Handed Kites