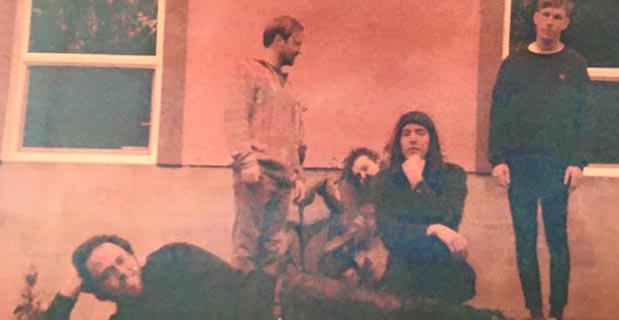 The weight of adulthood

Having listened to the record, I can tell a lot of emotional strain went into it. I read that you found really hard to perform on stage, especially when you started as a solo act. So how are you feeling now, that everything has upscaled, you’ll be touring extensively, a lot of people will be listening to your songs (and to the pain inside them)?
My experience has changed, but not because I feel any differently about the songs, or about music in general, just that the circumstances have been altered and I’m playing shows way more consistently. I’ve come to terms with the idea of sacrificing yourself for art, and what that means, and it’s welcoming. It’s always felt natural for me to embrace vulnerability, and sensitivity - it’s still emotionally challenging, but empowering at the same time.

Some of the problems you (and your band members) have dealt with in this record concern the “great precipice” of finishing school and finally finding out what you are worth for – a very weighty moment, that you expressed very well with your music and that invests me very much. Now you’re starting a music career, after planning being a professor in printmaking. How do you feel about the whole thing, now?
We’re taking it one step at a time. I have no idea what the next two, ten, twenty years will be like. Something positive I’ve been able to take from touring full-time is the ability to adapt - you have to be ready for anything. When you get sick on the road, you don’t get to baby yourself, there isn’t anywhere to properly rest, you just have to do the best you can with what you’re provided. It’s one of the most difficult things I’ve ever done, so in a way I feel like I’m better suited to handle anything that comes my way post-tour. I want to always be a maker of things, I want to do a lot of home recording in the future. “Music career” is such a challenging idea to grapple with, I’m not entirely sure I know what it means.

Part of the result, I guess, comes from the emotional quality of the recording process. How do you look at it now? Is it more of a relief to have it finished, or you kind of miss those days?
I’m ready to work on the next record. It was such an important time for all of us, when we made “When You Walk A Long Distance You Are Tired”, and I think that aspect of the whole thing is appropriately documented by it. I don’t miss it - I was struggling, more than usual. I do really miss being home, and constructing songs and arrangements, and the whole process of being comfortable and creative. Lately it’s been difficult for me to write, as we’ve been on the road since the beginning of this year.

I read that recordings started when you had been playing together for just one month. Would you have them sound any different if you recorded them now? Have they changed after one year of live playing and so on?
We’ve talked about this a lot - we all agree that we’re lucky that we recorded when we did. The songs from the record have changed so much, and at times they’re rather improvisational when we play them now. It’s more challenging that way, it keeps us excited about it. The record is improvisational in a vastly different way, because it was this process of stabbing in the dark, trying to evolve into an identity as a group, in real time in front of microphones. So in that way I think we were able to capture something that isn’t the same anymore, and probably will never be.

I especially like the arrangements of the record, very classy and they help transfigure the emotional impact of the songs. They make it easier to connect to the songs, in a sense, at least in a more “detached” aesthetic way. Can you tell us about your band members, how you met, how you put songs together in such a short time, and so on?
We were all playing music in Athens. It’s a small town, so we all knew about each other’s bands, went to each other’s shows, etc, before we were even friends. It was obvious that we all shared this mutual respect, that we took ourselves and our projects seriously, that we wanted to make things that were special. All of the members still front different projects - Matt of Group Stretching, Drew of New Wives, Patrick of The Viking Progress and Bronze Brain.

Almost all of the songs on “When You Walk” were songs I had written prior to the full band incarnation of Mothers and been performing for quite a while as a solo act. So the skeleton of the record was already in place - it just came down to us very carefully constructing the right space for those songs to exist in.

I think what makes this record outstanding with respect to other “emotional”, young songwriters is the richness of styles, the dynamism of songs. Can I ask you about your major musical influences?
All over the place. It started with bands like Neutral Milk Hotel, Bright Eyes, The Microphones, Sufjan Stevens. I became interested in the textures of Animal Collective. I was introduced to Don Caballero and Hella when I started college, and started listening to more instrumental music. I became really interested in more abrasive stuff, like Lightning Bolt, Arab On Radar, Daughters, Ex-Models. I love repetitive composers like Philip Glass and Michael Nyman. One of my favorite bands ever is sBACH.

You started recording by self-financing, but then a label (was it Grand Jury, or Wichita?) became interested in you and is now releasing the record. How did it happen?
It seems that the catalyst was CMJ, both for Grand Jury and for Wichita. It was our first music festival, only our second time playing in New York City. We originally had five shows booked, for five days. By the end of the week, we’d played eleven shows in five days. It was so brutal. Both labels were at all of our shows, and I think they probably figured if we were still coherent and cheerful by the last day, it was worth looking into. The folks at Grand Jury, and at Wichita, became our friends before anything moved forward. It was personal, human - that was exactly what we were looking for.

I read the number of people are labeling their occupation as “artist” (or “musician”, or “songwriter”) is increasing, at least in the United States. This is something that makes me think, if I compare it with the crumbling revenues from direct music sales and also the overall decrease in the total amount of money spent in the music orbit. From your point of view of a young but emerging artist, do you think you can look at your music career as, like, a “day job” career realistically, nowadays?
I have no idea. After college, I worked at a restaurant, up until we left for tour earlier this year. I’ll probably go back to work there when we’re home, when I have time. That being said, we’re making it work right now, on the road. We’re all making less money than we were when we were home, working other jobs, but it’s worth it to be doing what we love somewhat sustainably. We haven’t been at it long enough to know what it will be like long term. I’m not interested in having a “music career” - I’m interested in staying healthy enough, and having the means, to keep making art out of whatever I can get my hands on.

When You Walk A Long Distance You Are Tired