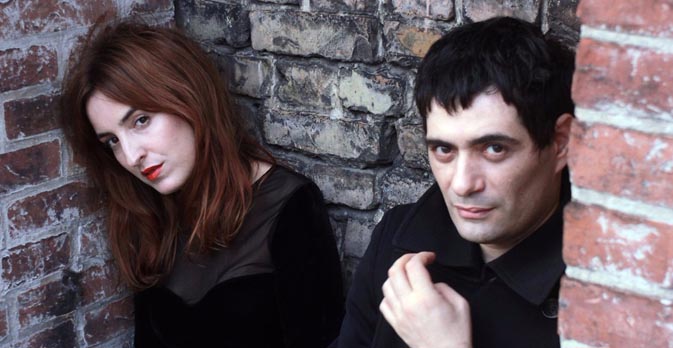 interview by Michele Guerrini
Tweet
How did you give birth to your project? What were the first steps and the artistic goal you would achieve?
Tomas: I always wanted to play with Carmen and always wanted to be with her, we always liked each other and each other's work. We started as soon as we meet in Europe and move together to an empty house. We wanted to explore and express our obsesions and interests and generally enjoy ourselves. At the begining it was more abstract, pure shapeless sound to go along with our videos and collages, and then we started to make songs, playing live, etc.

Just bass, synths and vocals. these are the typical items of many minimal/new wave bands but in your music I perceived a poetical soul too. The spoken word style of some composition, and the elegance of spanish language... a black morbid poetry...
Tomas: Well, it is not only that, but also samples, percussion, theremin and tapes. We are not a minimal wave band. Tags and movements bore me. Some people related us to the minimal wave  but it's because the time that we released our album, wich coincides with a renewed interest in that music because of the excellent work of people like Wierd Records and Xeno and Oaklander, but we weren't aware of all this when we released our album and I have all respect from them, but what we do is different. Anyway, people related our work with different styles and bands, depending on the things they are into, but nobody can nail what we do because is something new. When we started in 2006 we weren't aware of other people using similar formations, we just applied the same idea we always got. Before MH I played in a similar formation in Argentina, a band called Travesti, and before that I played in a band wich was only bass and drums. It seems a natural progression of what we always did. Carmen always played piano since a child, and before Mueran Humanos she was playing keyboards on a band called Mujercitas Terror. So we just took our instruments and use them to give birth of Mueran Humanos. The idea is to use what you have, not picking the instruments for their sound, but twist the instruments that you have to make them sound as you want. In that way, we don't use the instruments, we abuse them.

"Horas tristes" and "Leones en China" are the longest and most introspective compositions. on the opposite of "Cosmeticos para cristo" and "Monstruo", shorter and more aggressive. How would you define this dualism inside your music? From what these songs take origin?
Tomas: In the begining we did long improvisations and nothing else, we were locked on our apartment playing for hours the same riff over and over, we started with one sound, or one note, or a prepared tape or a drum machine pattern and build things around it, improvising, allowing the thing to grow. That's the origin of all our songs, so some of them get shorter and some of them get even more short. It depends, we treat each of them as a totally different event, every one of them is a different creature and needs a different aproach. It's a long organic process back and forth between Carmen and me. We work in a cinematic way, each song for us is not only a song but also an aural place, in a way that a movie soundtrack works. And like a soundtrack, you choose different sounds and duration depending on the scene

There is a strong religious content in your music, what are the thoughts, the concepts that you would express?
Tomas: "Religion speak of trance, ecstasy, trascendence and the communication with the beyond. Also, religion tends to concentrate meaning and power into symbols, images and verses. Just like art. Religious art is important to us because it provides a frame to transmit knowledge. Our interest is on the ritual, architechture, art and philosophy of religion. I am of course aware that religion is a tool of social control but that's organised religion and in the end you can say the same about art, after all propaganda and advertising is art used for social control, so we don't pay attention to that aspect of religion. We didn't have a religious upbringing, I'm not even baptised, so we don't feel the need to rebel against religion. I am into the free interpretation and study of religion, into explore this fantastic store of knowledge. I feel keen to the approach of people like Jung or Philip K. Dick to religious traditions. We are interested on all religions and the occult. One example of this is the first issue of my fanzine of cut ups and collages Mueran Humanos - from 2003, we took the name from it. I had this vision of the cross as an upside down phallic symbol. Also a naked man is nailed on it but you can't see his genitals, so the cross itself represented it. So I assambled an upside down cross made of a mysil, a lipstick bar and a fragment of a Robert Fludd drawing and put the words "Mueran Humanos" on top of it, that was the first time I used that name. We don't use this symbols with aesthetic purposes only, we used them to communicate meaning."

Clock DVA, Suicide, old school EBM, minimal wave: your music follows many paths but they're re-elaborated in a personal way. How much time did you spend to evolve to your style and from what roots did you start?
Tomas: Rock culture is anglo-saxon, and I am not, so since I started playing music as a teenager I always wanted to generate my own folk music, the music of Buenos Aires today. Tango is the music of Buenos Aires but it belongs to another era, since the 40s nothing really happened, it doesn't sound like the city anymore. So I was listening to things like Neubauten, PIL, Swans, Cabaret Voltaire, but I was always aware that it wasn't my culture. And because we didn't have a sound of our own, we decided to invent it. On the bands I played before MH we were looking to make the folk music from our era, that was the main preocupation, to reflect our perception of the city and our experiences as teenagers living there in that specific time. What we do with Mueran Humanos is less a reaction and more a construction of another space, a dream logic, a space between Carmen and me, is not a psicogeography of the city but of a private space. On the other hand we don't live in Buenos Aires anymore, so Mueran Humanos is different but I still think our biggest influences are the bands that we played before, the genre that we tried to invent. We don't have style, "style" sounds like "etiquette", a code of behaviour, I prefer the word "personality". It's an ongoing process all the time, never stops, and all the steps are Mueran Humanos in a different point of mutation. We don't follow anybody else's path. We are making our own language. As I said we started doing long abstract soundscapes for ourselves, exploring our instruments and our chemistry so that's the roots of us, of all the bands you mentioned only Suicide was really important to us and yes it is a big influence, but not necessarily because of the sound of them, but because the purity of their expression and the freedom and frontality of their approach.

The Artwork of the album is a work by Carmen. How did you choose it for your first LP? What is its meaning? An obscure and cruel vision of the woman identity?
Carmen: Could be, but there's also a work with purely the colour and a sense of humour in it. Tomas: It was clear for us that it would be the cover of our album two years before we recorded it. It's a part of the album as important as the songs, I don't know why we chose it, many decisions just happen without any discussion or talking, if felt right.

What are the artists (poets, writers, painters) that influenced your aesthetic and you life
Carmen: There's a lot, from writers from past centuries like Lewis Carroll to comic artist of today like Charles Burns. One of my favourite artist is Dario Argento, because he condense many things that fascinated me.
Tomas: The list would be endless but here are some: Dario Argento, Kenneth Anger, Bergman, Max Ernst, Maya Deren, Jan Svenkmayer, Murnau, Kafka, Rilke, John Carpenter, Rimbaud, Austin Osman Spare, Philip Dick, Jean Cocteau, Maurice Maeterlinck, Ezra Pound, Debord, Wyndham Lewis, Borges, Roberto Arlt, Nick Blinko, William Blake, Bosch.

I saw on your blog\website that you released a short movie titled " Mili The Rat" and that you have modified the front covers of "Seventeen"magazine. What is the end of these projects?
Carmen: Visual art for me is a different language, I use it to communicate things that I can't explain with words, so I can't talk about it, I just did it, they are alive to me and I hope that they explain themselves. I always did visual art, nowadays I am more absorbed by our musical project but it's still part of my life and it will always be. I'm interested in these particular time in integrating my visual art with Mueran Humanos. My last projects were the ilustration of a Lovecraft's poemary that I did for a Spanish edition, in colaboration with my friend Daniela Zahara from Argentina.

Just the last questions. How would you describe your Italian tour? How was the gig with Kreativ In den Boden and how are your relationships with Wardance, the booking agency that brought you here?
Tomas: The Italian tour was fantastic, Italy is an incredible beatiful country. It's so different from Argentina, in Argentina everything is new, not much history, so going to the birthplace of the Western civilization is really a psychedelic experience for me. People were great, really friendly, funny and supportive and I've enjoyed a lot their company. Wardance and Luca Grillo and the bands we played with, everybody were all really nice with us. In Genova we were supported by a mindblowing band called UR.  So in the end was the most fantastic tour we could ask for, what can I say? Grazie mile!!! And I want to come back as soon as possible and play more cities.

What are your plans for the future, I know some stuff is coming out right? What would we have to expect from your new songs? After Burial Hex, will there be other collaborations?
We just released a split seven inch with an Argentinian band, Mujercitas Terror, in Mexico on the label Valevergas. And we have two releases in the UK in the near future, one seven inch single with 2 new songs on the new record label Louder Than War, launched by John Robb and Southern Records, and one 12 inch on Vanity Case records, on one side it will have La Langosta, wich is an old song, and on the other two or three new songs, we're still working on it.
There will be more collaborations in the future with some great people but it will be a surprise. I am starting again to put out solo stuff, first I will re release a tape that I made in 2006 in London, wich is only bass. I've only made 10 copies of it and now it will be rereleased by the Berliner tape label Noisekölln. I will make probably more releases on my name, I have a lot of stuff. I hope that around November we will record our new album, we got a lot of songs but they need to mature still. What to expect to our new songs? They will blow your mind, I hope.
Discografia