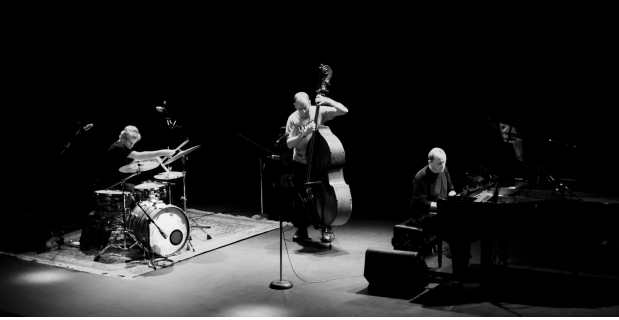 The trio of wonders

interview by Myriam Bardino
Tweet
Not easy to label, between jazz, ambient, avant-garde, minimalism, the Necks are mentioned by numerous bands and music critics as one of the most interesting band around. Their concerts are always a unique experience. We met this trio of wonders”, during one of the four sold out shows here in London, last October. With Lloyd Swaton we agree for this following interview, with Tony Buck and Chris Abrahams acquiescence.

At the end of October, you concluded a tour around Europe. How did it go?
It was gruelling, but extremely satisfying, and very successful. Every single gig was great. We continue to be delighted that a band which started playing in private in a rehearsal room nearly three decades ago, is attracting sell-out crowds on the other side of the world. That's something none of us would ever have imagined when the band formed.

The Necks have been playing for 25 years together now, what has changed in the way you compose and interact together from those early years to now?
Actually, 28 years now. Nothing's changed except for (as one would hope) a gradual evolution, which would be hard to describe in words. The basic principles fell into place very early on. I guess one significant change is on the technology side. We're certainly recording our albums differently to how we were 25 years ago, but so is everyone.However, we still tend to record most parts on our studio albums in real time, and I believe this is one thing which sets our music apart from many other contemporary releases.

Do you use different process to create/express your music live and on record? Do you see any limitation to the recording process?
Yes, in the studio we build things up, or peel them back, over a period of weeks. We don't restrict ourselves to just piano, bass and drums. The only limitation I see is that special feeling that a live concert conveys, but having said that, we've found that a great live show doesn't necessarily make a great live record. Sometimes you really just have to have been there. 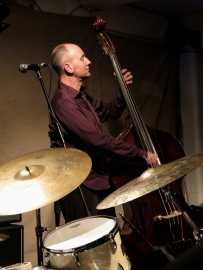 In October I saw the Necks on stage alone with a piano, bass and drums and also on stage with Evan Parker, creating different musical experiences. Also, sometimes in some of your recordings, you brought other elements: guitar, electronics,etc. What is the dynamic you prefer, working in trio, with 3 instruments only and exploring the boundaries or bringing new elements as other instruments, effects or collaboration with other musicians?
Essentially we are an acoustic trio, and that is what everything else builds from. We are very careful and selective in our collaborations, and happily, each one that we've done so far has been very rewarding and fruitful.

Having seen you live few times, some people get in trance in a deep relaxation, others seems to experience ecstatic joy, other silently cry and a few others storm out from the venue. Is the kind of emotions are you encountering around the world or find any difference in the public reaction and the reception to your music?
I wasn't aware of too many crying. That surprises me, as I don't find our music particularly emotional, but one thing I've learnt in my many years as a professional musician is that one's music is open to as many interpretations as there are listeners.Nor was I aware of people storming out. (Oh well, you can't please everyone. It's probably better that they leave, rather than ruin the listening experience for those who are enjoying it.) As to your question, I haven't really observed any strong differences from place to place. When people "get" our music, it doesn't seem to matter where they come from.

Generally music critics are quite puzzled when they need to label your music. Reading different reviews, I have seen terms used as jazz, avant-garde, post or avant-jazz, ambient and improvisation, minimalist, kraut-rock, trance. On your website your define your music as experimental jazz. As musicians have you had any problems the way your music is labelled?
We've always seen it as a positive. There's no denying that we have gained quite a reputation for being "unclassifiable". Yes, it causes a few problems, not just for writers and publicists, but for us too, but overall, I think our lack of a pigeonhole is definitely a positive.We have had a few experiences in the past where journalists have likened us to the Keith Jarrett Trio, EST, and The Dirty Three. Much as I respect all of those groups, I think that's just lazy journalism in each instance.

In Australia you have won the ARIA Awards for the Best Australian Jazz Record of the year with “Drive By” (2003) and the “Chemist” (2005), do you think the same would have happen in Europe or USA. Do you think Australia is more open to innovation? And less focus on categories?
I think Australia is less open to innovation, but also less focussed on categories. The thing that outsiders need to understand about Australian culture is that critical mass is so difficult to achieve, given our isolation and small population. There are many flashes of brilliance, but sustaining them into some sort of body, or movement, (which is where categories do start to come into play) is extremely difficult.I feel confident in saying The Necks could never have come into being anywhere else. There is a lack of pressure in Australia (even more so a quarter of a century ago) which is just the sort of thing The Necks needed in the nurturing phase.

In 25 years, you released 17 albums (of which 4 live albums). If someone wanted to listen to the Necks for the first time, would you have any particular recommendation
We're extremely proud of all of them, and no one album is representative. My advice to listeners is to try one album, and if they don't like that, maybe try at least one more. My personal favourites include Aquatic, Hanging Gardens, Silent Night, Aether, Silverwater and Open. But I stress, we're very proud of all of them, and humbly feel they've all stood the test of time.

Did you setup your own label “Fish of Milk” because you wanted the full control on the release of your records? Are you releasing the Necks album only? Any other bands in the future?
Yes, very much so. The label that originally released us was getting very slow in paying us. To be fair, they did eventually pay us everything they owed, which is far more than you can say about some record companies we've been involved with, but by that time we'd figured it was better to have control in our own hands, and I'm very glad we did set up FoM. We've only ever released Necks material, mainly because it's much simpler that way. All costs and earnings are simply split three ways. So, no, no plans to release any outside titles, much as we like a lot of the music going around.

I guess you were the first ones to release your music on a Cd format, “Sex” in 1989 , how did you embrace this technology? What do you think of  the online technology nowadays. Is the concept of paying for a release going to disappear and are we going to go back to the music paid purely as a live performance and lived as an empiric and fleeting representation?
I'm not sure what you mean by "the first ones"- certainly not literally. But the advent of the Cd format was definitely a serendipitous event for us - we'd already established the principles of our long-form improvisation, and initially had no intention whatsoever of releasing any recorded material, but we decided that the fact that we could put a one-hour piece on record uninterrupted swayed us considerably.As to where online technology is taking the music business - well, it's grim, to say the least. I just finished reading "Free Ride: How the Internet is Destroying the Culture Business and How the Culture Business Can Fight Back" by Robert Levine, and it's pretty dismaying how things have been unilaterally taken out of the hands of the creators. I personally don't like downloads, legal or not, but I'm probably in the minority. We're lucky in The Necks in that we have a very loyal fanbase who would never dream of not paying for our music, so our CDs still sell quite well for a band of our level of fame. But who's to know how many new fans never paid for our music? We will soon be offering all our albums as digital downloads. 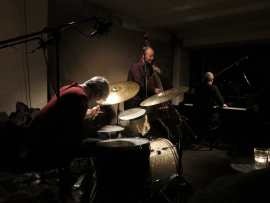 On the other hand, you released “Mindset” in 2011, and it was your first vinyl ever. Why did you decide to work on vinyl, did you already have some compositions that fitted the format or did you compose specifically for it?
I'm not one of these people who hate Cd. I think they're a great format, and I like the sound. But all of us in The Necks loved vinyl too. We felt we were up to the challenge of composing two pieces of music which conveyed what The Necks are about, in 20 or so minutes, rather than our usual hour. I'm not sure we would have felt confident enough to do that earlier in the band's life. We also enjoyed the challenge of creating two pieces of music which were separated by a gap which may last a few seconds, or several weeks, and which also involved a specific physical action (going over to the turntable and flipping the disc) for that gap to be bridged.

I have read that at the early begin you didn’t feel that the live performance was the best mean to express your music, and nowadays it seems that the majority of music critics agrees that the live performance if the way you best express your music. Don’t you think is a paradox?  What has changed to your live experience?
Not quite true. When we first got together to workshop the idea we had in mind, we felt pretty strongly that in order to give the music the best chance of flourishing, it was important to do it in private. I personally felt, furthermore, it was important to have the notion in our heads  that we were never going to be performing The Necks' music in public. I wasn't aware critics have passed an opinion on the "best" way to experience our music. For me, the live concert is always the "original" Necks, the template, the grounding we can always return to, but I would caution against assuming that means it's "better". I feel very at ease in the recording studio, and very proud of what we've done in terms of studio albums.

Can you get through the many projects and collaborations you guys are involved in and your future plans? Are you going to release a record soon and tour Italy soon?
We have an Australian tour planned for early in the new year, with some time in the recording studio. We have a short tour of Europe in late March-April; probably no more than 10 shows. And we're planning a longer tour of Europe, 20 or so shows like the one we just did, for September/October.We love playing Italy and hope to return, but at this stage we have no idea what our agent is locking in for us.