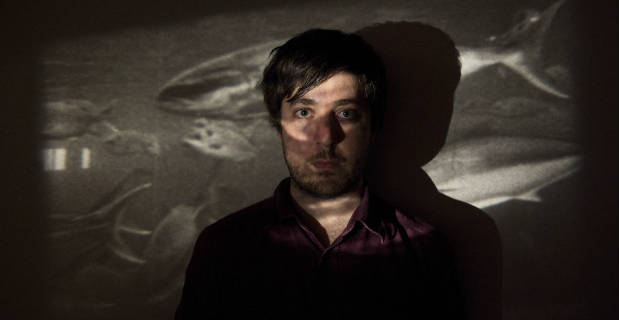 All the colours of synth-ambient

When I'm writing these questions, "Mima" has just been published and I've been informed that you are going to publish another album in April... The third in less than a year! Is there a reason between this rapid series of publications?
The new ‘album’ – "The Silver Chimney Club / Wat Tyler" – is actually comprised of two long-form pieces that I wrote and recorded last year. It's not an album in the same sense that "Haeligewielle" / "Onkalo" / "Mima" are in that it wasn't written as such but I thought the two pieces complimented each other and worked as two sides of a single release (sonically and thematically) so I asked Denovali if they would be up for giving it a physical release. As for the rapid succession of releases, in this case it just worked out that way but I tend to keep several projects on the go at any given time. In the past year I've also self-released another couple of solo cello records and released an LP on Tartaruga under the name Glottalstop.

Have you worked separately on each of these albums or are they sons of the same sessions?
The two tracks on "The Silver Chimney Club / Wat Tyler" were written and recorded separately to "Mima" but concurrently to the work I was doing on that album so I guess they're from a similar perspective in a way.

What is the concept behind Mima? I noted a darker and more “mystic” climate compare to Onkalo...
I think with "Mima" there's definitely more myth and 'mysticism' woven in there (even if it's of my own making). I think whereas with Haeligewielle and "Onkalo" I was taking real event and weaving mythic resonances out of them, with Mima I took these more as the starting point and went from there.

I think you also tried to dig and explore the deeper section of your sounds, while Onkalo remained more on a multifaced surface... Do you agree?
Perhaps, or it could also be more of a case of being more comfortable with the palette of sounds I've been using. I increased the amount of interments I was drawing on quite a bit between "Haeligewielle" and "Onkalo" and then this was carried over into Mima so there's probably a certain element of peeling away the layers with the sounds I was making on Mima, yes.

What do we have to expect from the album we'll discover in April? Where are you going to “go” this time?
"The Silver Chimney Club" was written to mark the death of my grandfather, Ernest Barrett, who passed away at the end of last year. A civil engineer during his working life, The Silver Chimney Club was the name of a group formed of fellow work colleagues who would meet up on a semi-regular basis - I suspect more for social than professional reasons. As a tribute I'm not sure what he would have made of it but I wanted to create something that combined the industry he was a part of with his love of music that was passed on down to me. My grandfather was a socialist and Labour supporter (by which I mean the original post-war, pre-Blair party) - another thing I inherited from him, and which ties with the second piece on this release. "Wat Tyler" is named after the leader of the Peasants' Revolt in England in 1381. Ostensibly a revolt against the poll tax, the movement was built on an undercurrent of a desire for social change and a demand for an end to the stiflingly limiting social structures of the time. Initially successful, the rebellion was abruptly cut short when Wat Tyler was murdered by the Mayor of London after Tyler supposedly insulted the young kind of England, Richard II during a parley. Over six centuries on, a lot less has changed in the world than those involved in the Peasants' Revolt might have hoped.

Your music is quite difficult to frame... Just listening to "Onkalo" I noted similarity with synth-ambient acts, electroacoustic world, “post-rock” derivates and orchestral elements... But everything really far from what I listened to before. What are your main landmarks?
It's a bit tricky to say in all honesty as I think a lot of the stuff that has inspired me with the music I meant tends to end up not sounding anything like what I do in a lot of ways - the relationships between the two are pretty abstract. But I'm not aiming for one thing in particular. I guess the one guiding landmark would be to try and stay open to new ways of doing things, if that's not too vague.

When and how did you fond Petrels? Artistically speaking, what were you looking for by amd from this project?
Petrels began purely as a solo outlet aside from Bleeding Heart Narrative where I could write without the constraints of the line-up we had in that band. I didn't really think beyond what I wassailing for with the first album initially but since then it's grown and evolved. I think I've definitely developed a certain sound and approach with Petrels but I try not to think too much about putting my finger on what Petrels is too much for fear of boxing in what it could be - I'm still working that out.

What does it represent now for you? Do you imagine yourself in music outside Petrels?
I'm already involved in a few different projects outside of Petrels such as Glottalstop, my solo cello stuff, as well as writing music for and collaborating with other people. Petrels remains my main focus I think but there's lots of other tangents off from it that continue to expand and develop.

How much of what you play is composed and how much, instead, improvised?
When I'm recording I generally start with a basic idea in my head for an initial combination of sounds or rough structure of a pieces and then go from there - usually working pretty quickly. Whether or not the results turn out as I intended originally (and more often than not they don't) there is at least a certain intention from the start - even if it is often pretty vague - so generally the pieces aren't improvised but they are generally made up of a lot of first takes. I like working quickly so as to allow room for tangents and accidents to happen, which his maybe a bit harder t achieve (for me at least) when things are more methodically plotted out.

In 2012 you published a cassette under your name... Why hasn't that release been included into Petrels' saga?
That cassette - "Yowls" - was a collection of solo cello improvisations originally released in a very small edition of 50 by Econore. I decided to put it out under my own name as because it was improvised it felt like a different thing - stripped back, unadorned and without the usual layers of Petrels. I've since self-released another two solo cello improvisation collections - "Yauwls" and "Yuaols" - through bandcamp. I guess I could just put out everything I do under the Petrels moniker but I've always had a few different projects under different names and I like working that way - feels a bit more liberating.

What's the relationship with Denovali and how important is it? The label is now publishing each of your release... How did you get in touch with them?
Denovali initially got in touch with me after I'd released Haeligewielle in a small initial run on Tartaruga, suggesting a vinyl re-release. This new release will be my third with them since then and it's seemed a good fit so far. As a label they work insanely hard and yet - despite the fact they're based in another country - I've found it easier to work with them than some other labels I've put stuff out with in the UK.

Your first album as Petrels was probably a sort of “general test” for what you would have experienced after... Were you still looking for the right way to take?
I had quite a clear idea for the kind of sound palette I wanted for "Haeligewielle" but it was very specific to the themes of that particular release and I honestly hadn't thought any further down the line with what I'd do with it beyond putting that together. The combination of strings/noise/electronics that I used for it just seemed to fit though and gave me a load of ideas for different directions in which to take it following on from that - directions I suspect I'll be trying out for quite some time to come.

What is your instrumentation kit composed by? What do you usually “play” and what do you leave to digital/artificial execution?
The main sound sources I use are cello and a couple of cheap synthesisers I have. All of the sounds I start with are acoustic/analogue and then I tinker with and change them to varying degrees digitally after recording. There's no ideological reason to work this way exactly - just the set-up I currently have. I've been playing cello on and off since the age of four so it's just the most comfortable starting point for the most part and is responsible for probably quite a bit more of the sounds on Petrels releases than people realise.

What about Bleeding Heart Narrative? Does the band still exist?
We called it a day at the end of 2012. A couple of members were moving abroad for an indefinite period of time and it just felt right to draw a line under it. Probably fair to say the playing as a six-piece takes up quite a bit more energy than we were all able to give it at that time.

What do you bring of that experience into your actual musical path?
Well, broadly-speaking the music and approach is different - BHN was a lot more song-based - but sonically and in the ways I approach writing music there's a lot of crossover. Even in the more minor points - such as writing for strings playing alongside noisier elements for example - a lot of what I learned and developed with Bleeding Heart Narrative carries over. I'm sure I'll go back to writing more wit hosing structures at some point too but I suspect it probably wont be with Petrels but we'll see.

You played a lot of times supporting important artists... Do you find the stage as a good place for your music?
Definitely. I think in a lot of ways what I'm trying to do with certain elements of Petrels make a lot more sense live than they do recorded. I also like that as a solo artist I can have the flexibility to just turn up to a venue with a suitcase full of stuff and make some noise. Having said that, I do miss playing alongside other people, but it's possible that that aspect is about to change as well.

When you are on stage do you improvise everything or do you put something from what you work on in the studio?
It's about 50/50 stuff that I generate live and pre-recorded material that I manipulate live. From that there's also section that I leave (semi) unplanned for the most part but it changes from show to show. Some of the sound sources I use - such as choirs or large string ensembles - can't be replicated live (or certainly not as a solo artist with very little budget in any case) so I'm happy to use pre-recorded stems for these to build off of.

The next live shows, will they be built around one or both your recent albums?
I should be playing stuff from "Haeligewielle" / "Onkalo" / "Mima" but something new might creep in there before then.

In the end, have you got any plan for live dates in Italy? It would be lovely!
Not at the moment but it is something I've been wanting to do for a while now so hopefully it'll happen before too long!