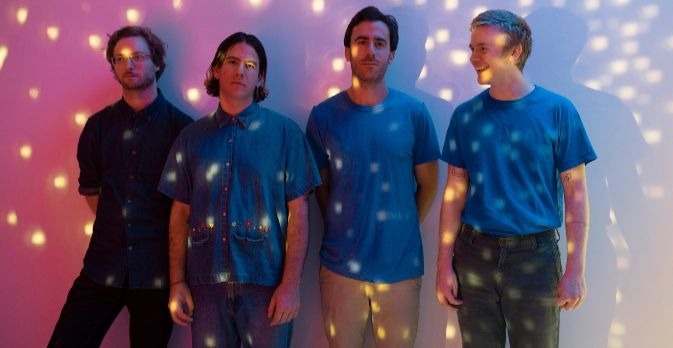 First of all, thanks for such a compelling and heartfelt album. Of course Pinegrove is known for their emotional charge, but in “Marigold” I felt an irrepressible need to communicate, more than in other releases – it’s an album that vibrates with life and one of the most defenseless I can recall. Is it this the way you intended the album to sound?
It was important to me to make something emotionally direct. I am always trying to refine and sharpen how I communicate as a lyricist (& as a human). This time, the emotional urgency guided me.

This is the first material you’ve written and recorded after your hiatus, if I’m not mistaken. What can you tell us about all these years preceding the release of “Marigold” and how they interact with its songs?
The emotional space I was writing from was more deliberately patient than past attempts. Since I'd felt misunderstood by the media's response to my situation, it was especially important to me to not respond in a reactionary way. As such I've tried to make an album that, yes, deals with conflict & resolution—any piece of narrative art does— but I'd aimed to make something that spoke to anyone at all who is going through a challenging time & could use an affirmative word. So these are songs that of course were informed by the time I spent away from the road. But they are not intended as journal entries. They are intended as notes of encouragement for anyone who could use that sort of thing.

Was there any particular work of art (book, record, both...) that helped you throughout this time?
I listened to a lot of Ben Seretan's instrumental project My Life's Work, which is 48 tracks, 30 minutes in length each (for a total of 24 hours) that each hover and play with a single chord. It was the perfect sort of music to think to. Then also Golden Hour by Kacey Musgraves was obviously life changing for me.

Pinegrove’s geometric artwork is well known for conveying meaning, with previous ones revolving around the concept of the square, or frame. These have also become an iconic tattoo for Pinegrove fans. The colors too have always been important (red for blood, etc.). Can you walk us through the different artworks and what inspired you for “Marigold”’s pixellated cover (which looks like a percolation diagram)?
Each appearance of the square in our art is intended as a shorthand for talking about art itself, or about communication. "Skylight", for instance, is intended to be an homage to art—how versatile it can be to let us escape or to deepen our relationship with ourselves & with other people. Providing comfort, providing challenge. & a window to observe the process. The art for "Marigold" is a zoomed in pixilation of the sort of mind that has blooming rectangles floating through it—a screen shot of a synapse.

A few years have passed from the general moment of public turmoil regarding male-female relationships, I know Pinegrove has shown to be fully supportive of the cultural change that the movement was meant to convey. Do you think anything’s changed, for real, after 2017?
I think microcosmically we've seen a lot of people reconsider how they interact with others, especially in romantic situations. So I feel, to the degree I'm qualified to weigh in, that there's some cause to be optimistic. But in other cases, especially in the American political landscape, I feel really disheartened to see the language of allyship so cynically weaponized to protect the status quo. But we see a much deeper, more complex commitment to allyship in younger generations, & I expect we're going to continue to see that trend.

One of the singles introducing “Marigold”, “Phase”, was described as a song about insomnia. Do you suffer from it frequently and what are your mental strategies (or medical aids) to fall asleep?
I do have trouble falling asleep sometimes. One thing I've found that helps me are these Youtube videos by Michael Sealey—hypnosis audio that guides you into a placid space and help you drift off.

Your passion for pop music is well known and I think “Marigold” is your most melodic album. Do you agree and is that something you actively work on as a songwriter?
Thank you. Melodic control is always something I'm striving towards, in a way; but I think it's a mostly subliminal process. I'm really just using my own judgement or sensibility to find if a song is finished, if it's exciting or engaging. One thing I will say is that I try to have each song have its own unique melodic signature, so that when I'm repeating melodic motifs to engage something semantically—little ornaments across multiple songs as a way to signify—then those can stand out more against that unique backdrop.

After releasing “Skylight” independently, you are now publishing with Rough Trade. A great signing (for both, I mean), but RT is a UK-based label. How is your experience with them?
Rough Trade has been terrific to work with, supportive in every way. I think part of why they were interested in signing us was that they were looking to expand their American presence. They have a US office in NYC, & those are the people we work with mostly (though the UK folks have been amazing too!) So yes historically RT has been UK based, but they're doin great work over here these days too.

In a defining sentence in a early interview, you said “being a good artist and a good person are really similar”. How do you see “Marigold” in this perspective?
Both being a good person and a good artist have to do with communicating honestly. Being a good artist for me begins with a tender treatment of the topics I want to engage. It's about opening a space to imagine beauty & honor emotional complexity. I've found many overlaps in my life & am striving to approach both my art practice & my relationships with energy & tenderness.

Thank you for your time. Can you promise you’ll make it to Italy to play the new songs in the near future?
We look forward to it! Much love.